I finished 13 Sentinels, and after finishing it I can say the story is nothing short of incredible. I won’t spoil anything, but by the end everything makes sense, more or less. There were some points I was a bit confused on, but luckily reviewing the updated descriptions and events in the Analysis mode cleared up a lot of things.

Though I’ve mostly focused on the story, the battle mode was enjoyable through to the end too. The final battle throws you against tons of enemies, but most of them are pretty weak. Obliterating wave after wave of enemies in the Sentinels was quite satisfying, though regrettably the framerate did chug a bit when a lot of enemies were on-screen.

By the time the credits rolled, I nearly had 100% of the trophies, so I played just a few hours more and managed to get all of them, unlocking the platinum trophy! Each mode showing “100%” in the menu is pretty awesome. To wrap things up, 13 Sentinels: Aegis Rim’s story is masterfully told. Splitting the story between 13 different characters, many of which often jump between flashbacks and otherwise non-chronological events, sounds like an impossibly difficult task. Somehow, Vanillaware pulled this off, and the result is a story that I don’t think I’ll be forgetting any time soon!

In finishing Super Mario Galaxy, I’ve now played through each game on the Super Mario 3D All-Stars collection. I’d definitely say this was a good purchase, and I fully intend to keep playing each game a bit to collect more Stars. I don’t know if I’ll get all 120 Stars in any of the 3, but Galaxy is definitely the one I’d be most interested in getting 100% completion in. This game was just so much fun to play through!

I think the biggest reasons Galaxy is so fun are the level design and the freedom the player has to choose which Stars they collect. The way levels are spread across numerous tiny planets allows for a lot of variety, and the interesting gravity mechanics make for fun platforming. Beyond that, there are more worlds than the previous 3D Mario games. There are fewer available Stars in each, at least initially, but you unlock worlds quickly enough that before long you have tons of worlds to pick from. If you run into a world you don’t like, you can just ignore it! Obviously if you’re going to go for 100% completion that isn’t an option, but if all you want to do is finish the game, you have a ton of freedom in how you do so. 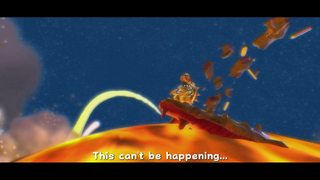 That about wraps up my Super Mario Galaxy experience. One thing I will say about the ending, I forgot how weird it is for a Mario game. For one, Bowser’s defeat is so dramatic, there’s this lengthy scene where he’s stumbling defeatedly on a small molten planet, and it took me by surprise. Also, at the end a bunch of Lumas sacrifice themselves to…recreate the entire galaxy or something? I…don’t really understand what was going on there, but when Mario, Peach, and Bowser wake up they’re back in the Mushroom Kingdom and everything is back to normal again so…it’s fine?

Anyway, like with the last Super Mario 3D All-Stars posts, I’ll end this one with my star list. With all the levels in Galaxy, the list is spread across 3 different pages this time! I believe my Star count at the time of this writing is 75.

PatronusLight and I played through this short story-driven adventure game one evening. Set in the Life is Strange universe and made as a sort of demo or teaser for Life is Strange 2, The Awesome Adventures of Captain Spirit puts you in control of Chris, a 9-year old boy living with his dad after losing his mother prior to the game’s events. A lot of the short narrative relates to that loss, and it was surprisingly powerful despite its short length. Most of the game just involves running around, examining and playing with things. Chris likes to play make believe and assume the role of Captain Spirit, using his imaginary super powers to accomplish various tasks around the house like turning on the TV and crushing aluminum cans.

There is a little checklist of things to do as you explore, but you don’t have to do all of these. I accidentally triggered the ending of the game sooner than intended, since I didn’t realize the interaction I was choosing would end it! By that point, we had basically done everything we wanted to anyway. From beginning to end, it only took PatronusLight and me an hour and a half to finish the game. It was fun, but more importantly it got us both excited to play Life is Strange 2, which we’ll be starting soon!