To start off with, in the story mode I finally unlocked the rest of the character stories, at least gaining the ability to start them. Like the other stories, progression in the stories is gated at certain points, and you’ll need to jump around between different character stories and sometimes even the battle mode to advance.

So what is the story all about anyway? Well, the first character available for you to play is Juro Kurabe. His story begins in a typical Japanese classroom in 1985. Juro is a seemingly ordinary teenager at a seemingly ordinary high school, but despite this, something has felt off about his life. He’s also been having strange dreams lately, dreams about enormous, mechanical kaiju attacking and destroying the city. After school, Juro walks home with his friend Kyuta, and runs into another boy he knows, Miura. Inexplicably, Juro’s hand glows, and he inadvertently summons an enormous robot, which Miura calls a Sentinel. Why does Juro have this ability? What are the Sentinels, and where do they come from? Before Juro can ponder any of this further, Kyuta speaks up, saying he has left him no choice. Juro sees a flash of white, and mysteriously forgets about the entire incident. When the player next plays as Juro, he doesn’t remember the other day at all, and returns to school life as usual, and the player is left wondering what’s happening, hungry to play more…or at least, I definitely was!

That’s the kind of hook 13 Sentinels likes to set up with its character stories, and I am absolutely digging it, though the story is quite complex. There are so many layers, and so many characters, that it’s difficult to keep things straight sometimes. Luckily, there’s an entire mode dedicating to reviewing synopses of each event for each character, and you can view them chronologically per character or for all characters at once. I’ve now completely cleared Iori Fuyusaka’s story, and I mostly know all of the events that lead to her joining the final battle taking place during the battle mode. I definitely still have some questions about her backstory, but I imagine those will be cleared up eventually in the other characters’ stories!

I also cleared the first Area in battle mode. It seems like there’s only 1 other area, maybe there’s more hidden after it though. Combat is still pretty fun, though it is pretty easy. Sometimes I wonder if I should try playing on Hard difficulty instead of Normal difficulty, since you can freely switch between them. I’m enjoying Normal though, so I’ve stuck with it. Instead of trying to explain more of the battle system, I’m just going to leave a gameplay clip here.

I started the final game in the Super Mario 3D All-Stars collection, Super Mario Galaxy. I’ve played it before, but that was a long time ago. I remember enjoying it, but I wasn’t sure if I’d call it the best 3D Mario like a lot of people do. After playing a bit of it again, I can definitely see why it earns so much praise!

To start with, it looks really good. I’ve only played it undocked, so I haven’t seen it in full 1080p, but even at 720p it looks excellent, and runs really smoothly too. One of the gimmicks in this game, aside from taking place in space across various tiny planetoids, is that Mario can spin. In the original Wii release, you had to shake the Wii remote to spin, but on the Switch you can either shake one of the joy-cons or just press Y. It definitely feels good having the spin mapped to a simple button press, it allows for tighter control!

The progression system in Galaxy is very transparent, which is definitely appreciated after Sunshine’s less clear progression. Like in Mario 64, new levels are unlocked when you get to a certain number of Stars collected, and the numbers are made explicitly clear in the level select stage. There are also levels that don’t have a Star number on them, and I’m 100% sure how these are unlocked but I think it’s just by getting all of the first 3 Stars in one of the nearby worlds or something. Like Sunshine, missions are ordered, and usually only the Star for the selected mission can be collected in the mission. However, there are nice exceptions to this in the form of Secret Stars! These exist aside from the main mission Star, and make things feel a bit more non-linear. They’re cool, and make it worth exploring the levels more!

Once you beat a level, a Comet may later arrive at that stage. While a Comet is orbiting a world, you’ll only be able to play the special Comet level, and if you clear it you get a brand new Star. The Comets provide various challenges. Some require you to beat the level without taking any damage, others are races against a shadowy silhouette of Mario, and others give you only a few minutes to complete the level. I think the last kind is probably my favorite so far, these Speedy Comets don’t change anything else about the level, they just impose a time limit on you.

On top of the fun levels, Mario also gets some fun new power-ups in a few of the levels. After collecting new power-up mushrooms, he can transform into Bee Mario, Ice Mario, or even Boo Mario! I’m guessing some of these powers were used as inspiration when designing Super Mario Odyssey, especially Boo Mario, because the transformations are rather silly but also lead to more varied and fun gameplay! Super Mario Galaxy has been a blast so far, and I’m definitely looking forward to playing the rest of the story, and maybe even getting a few more Stars on top of that!

So a new Sims 4 Game Pack came out a few weeks back, The Sims 4 Star Wars: Journey to Batuu. I finally tried it a bit this week, and it was okay. This pack adds a new vacation destination for your Sims: Batuu, parts of which are modeled after Star War’s Galaxy’s Edge at Disney Land and Walt Disney World.

My main Sim, Kaleigh the vampire, went vacationing to Batuu with her “friends,” Celeste the witch and Bret the mermaid. While at Batuu, your Sims have separate Wardrobe and inventory. You’re able to customize it a bit, choosing from several Star Wars themed outfits. You can even make your Sim look like a few different Star Wars alien races if you want, but I stayed pretty basic with Kaleigh’s outfit. 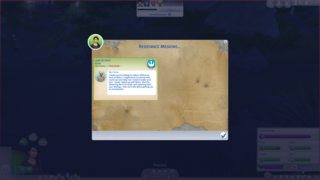 Aside from wandering around and enjoying the Star Wars sights of Batuu, the main gameplay mechanic added are faction Missions. You can do Missions to gain favor with the Scoundrels, Resistance, or First Order. Doing so unlocks some faction-specific costumes and earns you credits, the currency of Batuu. I didn’t really do many missions though, as I’ve heard from PatronusLight that they’re pretty repetitive, and they didn’t seem very interesting. Honestly, aside from it being Star Wars-themed which is cool to see, I’m not a fan of this pack. My biggest complaint is that it limits what interactions your Sims can use while in Batuu. I’m guessing this was done to avoid breaking the “Star Wars immersion,” but one of the most fun things about The Sims is how goofy things get when you have a bunch of packs installed. For example, while in university, Kaleigh frequently drank the plasma of the students in her dorm, sometimes right in the common areas in plain sight, and afterward did a keg stand and chugged some juice. In Batuu, Kaleigh wasn’t even allowed to drink plasma, the option was just straight up gone. I noticed this pretty much right after I went to Batuu for the first time, and it left me with a bad impression right off the bat. If this was Star Wars in any other video game format, I would say “yeah, okay, that makes sense, maintain the Star Wars universe lore/immersion, that’s fine.” But this is Star Wars inside The Sims 4, which is an entirely ridiculous concept, and limiting interactions like this just limits the entertainment value.

What makes the whole situation even more baffling is that you can still execute some entirely ridiculous actions. I realized you could romance interact with Stormtroopers, and after that Kaleigh spent some time having First Kisses with Stormtroopers through their helmets, and kissing aliens. Admittedly, that was pretty hilarious and a lot of fun. I’m sure there’s a mod or some setting in MCCC I can toggle that will re-enable the disabled interactions in Batuu I complained about so much, but I will never understand why they were disabled in the first place.