This is a very traditional RPG with some nice quality of life options. You explore towns and dungeons, fight turn-based battle to gain experience and levels, manage your equipment, and all the usual RPG trappings. One thing I like about this remake is that it doesn’t have random encounters, and instead has enemies appear in the overworld. I still try to battle many of the monsters I see so my team maintains proper levels, but it’s nice to be able to avoid battle when I want to focus on getting to the next location or something. Some of the nice quality of life stuff includes an Auto Heal option you can use from the field, which will automatically have your party members cast healing spells to heal the whole party most efficiently. You also get access to the spell Zoom very early, which allows you to instantly teleport to locations you’ve previously visited. This kind of thing usually seems to show up late in the game in most RPGs, so having access to it basically from the beginning of the game is really refreshing.

The story here is pretty simple. You play as a heroic character that you name, so naturally I named my hero Worm. Worm is trying to help the monstrous looking King Trode and his daughter Medea, who have been turned into a troll and a horse respectively. The one who cast this spell is the evil jester Dhoulmagus, and the party pursues him in hopes to restore Trode and Medea to their original forms. Trode and Medea travel with your party, with Trode offering advice on where to go next to advance the plot, and Medea pulling the party’s wagon. Naturally, the two of them don’t participate in battle. In the beginning, your only fighters are the hero and Yangus, but eventually the group expands to include Jessica and Angelo as well.

I really like this party of four. For one thing, everyone except Jessica knows at least some level of Heal spell. Maybe Jessica learns one later, but even if she doesn’t, having 3 out of 4 characters capable of using healing magic is really useful. There’s considerable customization for the team too. As your characters level up, they gain skill points that you can put into various categories based on how you want them to fight. Several of the categories for each character are for different types of weapons, and I’ve been dumping points into only 1 of these for each character based on what I’ve decided they should mainly wield. Each character also has a skill point category that is unique to them, like the hero’s Courage, or Jessica’s Sex Appeal. 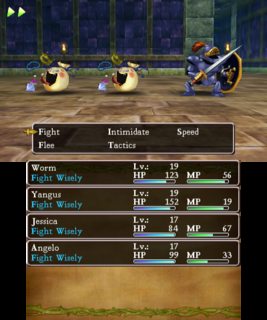 In battle with common enemies, I usually put things on auto-battle using the Tactics option. This allows you to have the AI choose commands for as many party members as you want, so I usually just set the whole party to Fight Wisely and let things go, and turn on the super speed option to speed up battle animations. That might sound boring or like a waste of time. Why would I play this game if I didn’t want to actually fight the battles, right? But it’s weirdly relaxing to watch, and kind of fun to see what spells and abilities the AI picks actually. It’s not like the battle system isn’t fun, and for boss battles I take direct control, but I really appreciate the Tactics option.

This game is super charming, the character and enemy designs by Akira Toriyama are superb. I’m also playing with a fan-made orchestral sound patch that swaps the MIDI music with official orchestral recordings of the same songs. I believe the orchestral versions were present in the Japanese 3DS release, but were taken out for international versions for some reason, so this patch just restores them. It sounds quite nice! Dragon Quest VIII has a ton to offer, and this 3DS version builds on top of the original game by adding even more stuff, like a photo mode with a bunch of optional photo challenges to complete. I’m over 10 hours in, and I don’t even think I’m very far. This a great game for that traditional RPG fix, and I’m really glad to have finally started this game and this series!

Starting just one super cute game this week wasn’t enough for me I guess, because I started playing this self-described “cute-as-heck” 3D platformer too!

This game is a basically an indie Super Mario 64 or Super Mario Sunshine, with some Banjo-Kazooie type elements too. The story is about as involved and important as in those games too. It’s a simple setup where Hat Kid’s spaceship is attacked by the mafia as she passes near the planet Mafia Town is on, and after the Mafia forces their way onto the ship, her stash of Time Pieces is lost, falling down to the planet’s surface. The Time Pieces power her ship, and she’s stuck without them. Hat Kid has no choice but to scour Mafia Town and the rest of the planet to recover the missing Time Pieces, with the player controlling her on her journey.

The level structure here is incredibly similar to the pre-Odyssey 3D Mario platformers. Each “Chapter” is a different location on the planet with its own aesthetic, and the Chapters are split into “Acts,” which are levels that take place in the same world but with different areas blocked off and different conditions affecting the world depending on the level. You access the Chapters from telescopes scattered around Hat Kid’s ship, which serves as the central hub, and as you gather more Time Pieces you gain access to more areas of the ship and more Chapters. Like I said, very similar to 3D Mario platformers!

What sets A Hat in Time apart from the 3D Mario games in my opinion is that its humor and situations are zanier than the ones seen in most Mario levels, and that there’s a higher degree of experimentation with some of the Acts. For instance, one Act is a murder mystery on a train, where you have to platform and sneak around to recover evidence that points to the murderer. Another kind of reminded me of the progression system of Luigi’s Mansion, where you have to collect keys to advance through a dark and spooky manor. One entire Chapter mixes the normal formula on its head, and gives you a whole open world to explore non-linearly to find several Time Pieces within it, tackling each of them in whatever order you please. The experimentation with these levels is very successful in my opinion, and the variety is quite nice.

Besides the Time Pieces, there are also other collectibles in many of the levels, like the balls of Yarn. You need to collect at least some number of these in order to stitch new hats that grant new powers that may be required to advance through later levels, but which Yarns you collect is up to you as long as you collect enough to stitch the hats you need. Besides the Yarns, other collectibles include Rift Tokens that give you non-essential cosmetic upgrades or alternate music tracks, and Relics that allow access to challenge levels.

I’m having a lot of fun with A Hat in Time! It’s a solid 3D platformer. Collecting Time Pieces is a whole lot of fun, and definitely scratches the same itch as something like collecting Shine Sprites in Super Mario Sunshine does.