I played through the final game of this collection, Uncharted 3: Drake’s Deception, and it was another good treasure seeking, gunslinging adventure!

Unlike its predecessors, Uncharted 3’s story sheds a bit more light on its characters’ backstories. Near the beginning of the game, you’re treated to a flashback of events from 20 years earlier, playing as a young Nathan Drake. It serves to both show the player how Drake and his friend and mentor Victor Sullivan met, as well as set up the main conflict of the game’s plot. It was really cool to see the origins of Drake and Sully’s relationship, having spent quite a bit of time with both characters in the previous 2 games!

Uncharted 3 brings new changes to melee combat, and these are introduced right at the beginning of the game. Triangle is now your counterattack button, and you’ll be prompted to press it whenever you’re in hand-to-hand combat with an enemy and they’re about to hit you. You can also grab and throw enemies by pressing circle. At first I thought these changes were cool, but I kind of wish they just kept Uncharted 2’s combat system. Because circle is also the dodge/roll button outside of hand-to-hand combat, there’s not a quick way to escape melee combat if you punch a guy and then realize you really shouldn’t be fighting him there since you’re taking bullets from all around. The new combat system made from some cool scripted encounters with big enemies a few times during the campaign, but I didn’t use it much in regular combat. One cool addition to combat is the ability to throw enemy grenades back at them. You do this by timing a button press when by a grenade, so it requires a little concentration. It was really nice to be able to throw grenades back instead of having to run from them all the time.

Like with Uncharted 2, I started on Normal difficulty but switched to Easy midway through because I was tired of dying so frequently. I made the switch when I was around one third of the way through, and I’m glad I did! I still died plenty of times on Easy though…this was not an easy game for me!

I don’t think Uncharted 3 is as good as the second game overall. It has great moments, and the story is still good, just not quite as good as Uncharted 2’s. The finale was especially underwhelming compared to the final chapters of the previous games. The music in this game is fantastic though. The score is excellent and some orchestral pieces really elevate certain moments! This is probably the best music of the first 3 games. I’ve now finished Uncharted: The Nathan Drake Collection. I’m glad to have played it, and I’ve come to the conclusion that I enjoy the series, but I’m not good at it.

Don’t worry, that’s not a typo in the title, although I’m still unsure why it’s “Forgotton” and not “Forgotten!” This is a story-rich indie game with light platforming and puzzle elements, and beautiful animation. It’s rather short (I played it over the span of a day), but definitely worthwhile because the visuals are stunning, and the story is pretty good too.

You play as Anne, the Enforcer in the Forgotten Lands. She upholds justice in this strange world where objects that have been lost and forgotten in the real world are magically whisked away and given life. As Anne, you’ll encounter many different Forgotlings, from talking shoes to talking chairs. Dialogue is fully voiced, which is a nice touch, though several actors voice multiple characters. Many times you’ll have to pick between 2 choices during dialogue, and this shapes the direction of your story to some extent. I don’t think there are any huge story branches in response to your actions, but your decisions are referenced a handful of times. 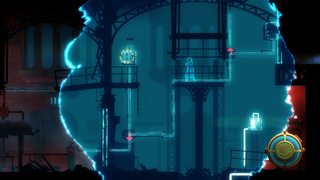 The platforming elements are rather slow. The controls are nowhere near as snappy and tight as you’d want in a full-fledged platformer, but they’re fine here since the platforming is rather basic and never demands too much of the player. The puzzle sections were much more well done. Many revolve around Anne’s arca, a device worn on her hand that lets her absorb Anima and dispel it into a different container. You can only absorb Anima from something when her arca is empty, and when it’s full she can also jump much higher and further using her mechanical wings. Lots of puzzles revolve around figuring out where you can get an arca charge and what devices you can power with it, and I quite enjoyed these.

Forgotton Anne is a beautiful game. There are so many great looking environments. Screenshots really don’t do the characters justice, because it’s the hand-animation that really makes them pop. It was a great experience! I don’t think I’ll replay it, but after finishing the game you unlock a nice feature called The Bridge that lets you rewind to previous points in the story to play from there and make different choices. The platforming was bland, but the rest of the game definitely made up for it!