Everything is spoiler-free this week!

I’m in the middle of my first winter now. I don’t think you can grow any crops in this game during winter…although I guess I haven’t checked the store to see if he’s selling any new seeds. My fields are snowed over and the tilled soil is gone, so I’m doubtful. The lake surrounding the winter cave is frozen over though, which means there’s a new cave to explore. I had one long excursion in it where I made it pretty far down by saving at the start of each floor, finding the ladder down, and reloading the save. Since I know where the ladder is after I reload, I save a lot of energy by not having to till tiles with the hoe to guess where the ladder might be. Exploring the cave isn’t that enjoyable for me, so I haven’t spent much time in it since then. It might be the best way to earn money in winter by selling the gems and minerals you find, but I still have enough money left from the Fall harvest to make it by.

In other news, the foal you receive early in the game has finally grown into an adult horse. It’s so fast! I’ve been riding it around pretty much everywhere now.

I tried giving some of the items I had on hand as gifts to some of the townspeople. Lillia was unappreciative of my generous gift of Red Grass. She called it gross, and if I’d had the option to respond I would have called her gross right back. Doctor was equally unreceptive to my kindness when I gifted him lumber, but he was way more polite about it than Lillia. 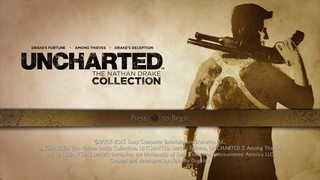 This is a collection of the first 3 Uncharted games. They originally released for PlayStation 3, but have been ported to PlayStation 4 with various improvements. Having not played any of the series on PS3, this was the perfect game for me to get into the series, and I played through Uncharted 1 & 2 this week.

Naturally, I started with the first game: Uncharted: Drake’s Fortune. The story follows Nathan Drake, an adventurer, treasure seeker, and gunslinger. His character is pretty similar to Indiana Jones in a number of ways. He seems to seek out ancient artifacts for personal gain, but quickly falls into the role of the hero due to his desire to help those in need. He’s also really good at climbing things.

The first Uncharted game sees Drake racing to find El Dorado before an unscrupulous man and his group of hired mercenaries finds it first. I was mainly interested in these games because I’d heard the Tomb Raider reboot series played similarly to Uncharted, but there’s much more focus on gunfights and action in this first Uncharted game than I remember in any of the Tomb Raider reboots. There are a few puzzles and some bits where you need to explore a little, but mostly you’ll be making your way from one area to the next, gunning down dozens of enemies in your wake.

It was a pretty short game, I finished it on Normal difficulty after just over 6 hours. There were some very challenging sections for me! I’m not the greatest at shooters, and considered turning the difficulty down when I frequently died at some spots, but I persevered and was rewarded with a Normal difficulty achievement upon finishing the game. I think my biggest complaint about Uncharted 1 is that the platforming/climbing sections were a little rough sometimes. I missed a handful of jumps and fell to my death, only to make the exact some jump just fine after respawning. The checkpoint system was pretty forgiving most of the time, but there was one time were I had to repeat a rather lengthy platforming section several times because I kept missing a jump near the end!

I started the sequel, Uncharted 2: Among Thieves, pretty soon after finishing the first game. Immediately, I noticed that this game looks significantly better than the first. Environments are more detailed, shadows look better, and the character models also look more detailed here. Not only that, but the climbing system is tighter, and I didn’t have nearly as many accidental deaths while climbing.

On top of all that, Uncharted 2 also adds in stealth mechanics. You can now sneak up on enemies and insta-kill them if you’re currently undetected. There are also more puzzle segments compared to the first game. These remind me heavily of the tombs in the Tomb Raider reboot series, and were a lot of fun. It’s still primarily an action-adventure game, with plenty of thrilling action sequences, but the stealth mechanics and additional puzzles added some welcome variety.

Uncharted 2 improved on its predecessor in pretty much every way. There were more varied environments, the scale of the story was larger, and the cutscenes were more frequent and had better character animation and expression. I played the first 2 thirds of the game on Normal difficulty, but around that point I got tired of dying so much in one of the chapters and switched to Easy for the remainder of the game. There’s definitely a lot of challenge here for those looking for a more difficult experience, since there are 2 further difficulty levels above Normal! Between both games I’ve played so far there is significant replayability too. Optional treasures are hidden in the chapters, and collecting many of them unlocks bonuses like the ability to change your character skin. You can change your skin and make Drake look like his friend Sullivan, or even one of the villains after you meet the unlock requirements, be it collecting enough treasures or beating the game on a certain difficulty level.

The Uncharted games have been a lot of fun to play through, even though I’ve struggled to know where to go on a few occasions or been obliterated by enemies on others. I’m definitely glad to have finally given them a try, and I’m looking forward to playing the last game in the collection, Uncharted 3, and will probably have to pick up Uncharted 4 at some point in the future too!