There should be no spoilers for either game covered this week. I’ve gone to great lengths to avoid spoilers in my Danganronpa 2 write up this week, so that one should be safe to read. I’m also not that far in Beyond Good & Evil, so there aren’t any spoilers for that in this post either.

I finished Danganronpa 2 this week! At the end of last week, I had just completed the Prologue. In the interst of avoiding spoilers, I’m going to be skipping over most of the game, and just providing my overall thoughts on the experience in this post, as well as talking about some of the side content a bit.

Once again, the murder mysteries presented were fantastic. I found that going into each case, I usually had an idea of how the murder played out, but I usually didn’t know who the murderer was until midway through the Class Trial debate. Also, there are some new mini-games during the Class Trials, like Logic Dive. This is basically like a snowboarding mini-game where you snowboard through a digital landscape and answer questions related to the murder. It was a fun addition to the Class Trial experience, and actually got a bit tricky during the last few trials, at least on the “normal” difficulty I was playing on.

The story and scenarios parallel the first game in some ways, but this is used to subvert player expectations by changing details and adding new twists. In the end, it ends up feeling quite different from the first game, and definitely builds its own unique identity. Of course, I wouldn’t notice or appreciate this if I hadn’t played the first game prior to this, so that’s another reason I’m glad I did!

Besides the wonderful main game, there’s also the Magical Miracle Girl Monomi where you play as Monomi fighting against the Monobeasts. This is a short action RPG where you fight against waves of enemies across several stages. Monomi’s main attack requires you to draw small circles to create attacks in the encircled area, damaging all enemies caught inside. As you defeat enemies, you may gain new equipment to increase Monomi’s stats. The stages are pretty short and you unlock them one at a time as your proceed through the chapters in the main game, so it was a nice diversion to play a new level of Monomi’s side game after each chapter of the main game. Of course, this mode is entirely optional, so you could ignore it without missing anything, it’s just a fun little diversion.

Like the first game, once you finish the main story you unlock a peaceful alternate reality mode. In Danganronpa 2, this is the Dangan Island mode, wherein Usami defeats Monokuma when he first appears at the beginning of the game, so no murders ever occur. The gameplay of this mode seems identical to that of the first game. You’re given a 50 day time limit, and must gather resources to craft things while balancing the cleanliness meter and everyone’s tiredness. I love the pixel art versions of all the characters! Each day, you can also choose to hang out with characters or take them on dates. All of this is the same as the first game, just with a new cast of characters. I didn’t play much of this mode since it’s more or less the same as in the first game, but I do appreciate its inclusion since it gives you an easy way to collect all the hope fragments for all characters.

This game was everything I wanted in a Danganronpa sequel. It was every bit as good as the first game, and that’s not an easy bar to reach. I noticed a few typos here and there which is sort of weird. Like, you’d think they could patch those out, it’s not like the game just came out. Maybe it’s not that easy though, I don’t know. Either way, the typos were infrequent and didn’t detract from the incredible narrative at all. I regret that I have to be so vague about the scenarios encountered within, but I really think Danganronpa is best gone into un-spoiled. I’ll end by simply saying I have high hopes for Danganronpa V3, whenever I get around to playing that!

Beyond Good & Evil is one of those games I remember seeing ads for or maybe reading an article in a magazine about it back when it came out in 2003, but that was the extent of my knowledge of it. Some time ago, it was being given away for free on Uplay, and I finally added a copy to my library!

You play as Jade, a young investigative reporter on the planet Hillys. The planet has been wracked by attacks by the DomZ, a mysterious alien race. They come in several forms, one of which is a creepy floating sarcophagus with arms. These absorb people inside of themselves and carry them away, never to be seen again. The game begins with one such DomZ attack on the lighthouse where Jade and a group of orphaned kids live. When the kids are taken hostage by the DomZ, Jade immediately retaliates, and the player is thrown right into the action! 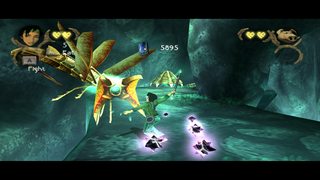 Beyond Good & Evil is an action-adventure game, sort of like The Legend of Zelda or maybe something like Ratchet & Clank. I’ve played very little of the latter so I’m not sure if that comparison is completely accurate. You attack enemies by mashing the attack button, and can dodge freely as well. Like pre-BotW Zelda, there’s no jump button. You also can’t fall or jump off platforms unless you’re meant to, at which point Jade will automatically make the jump if you run against the ledge. It’s really nice that there’s not any platforming here, because the camera is kind of bad sometimes. That’s been my biggest complaint so far: the camera. It auto-adjusts sometimes, but sometimes when it does this it is just not at a helpful angle.

But one of the coolest things about Beyond Good & Evil is the camera item. Since she’s an investigative reporter, taking pictures is a big part of Jade’s job. In the beginning of the game, Jade is contacted by the Science Center on Hillys, who offers who a cash reward for each time she sends them a picture of a species found on Hillys. This includes wildlife, NPCs, and even enemies. You can snap pictures of all of them, and once the camera reticle turns green you known your subject is framed up properly for the game to recognize and you can snap away. This is a good way to earn money to buy healing items and other upgrades, and you’ll also be required to take pictures during the game’s main missions. I feel like this emphasis on photography makes Beyond Good & Evil stand out among other action-adventure games. Not that it’s the only game to feature something like this (Zelda has done it several times with the Pictograph and most recently the Sheikah Slate), but it definitely emphasizes the mechanic more than any other action-adventure game I’ve played.

The story has been really good so far. Jade begins investigating a conspiracy involving the DomZ, and things on Hillys may not be what they seem. Presentation is sometimes a little weird. You’ll have a cutscene that’s done well, with good camera angles and music, and then it just ends super abruptly, switching back to gameplay immediately as soon as a character finishes their line. That can be a little jarring, but it hasn’t kept me from becoming invested in the story! Aside from that, it’s actually pretty cinematic. The way the HUD disappears during puzzle solving and exploration segments really makes it feel more immersive too. I’m looking forward to seeing what Jade’s investigation ends up uncovering!