Looking through the screenshots I took this week, I really played through a ton of the game this week. At the end of last week, I was still in the early game…and now I’ve finished it! It’s kind of mind blowing how much of the game I went through this week. I feel like I’ve been playing it for much longer than just 2 weeks, because so much happened in-game.

Because I played so much this week, it’d be hard to cover it all. Instead, I’ll just give a mini-review instead and sprinkle in spoiler-free out of context screenshots. 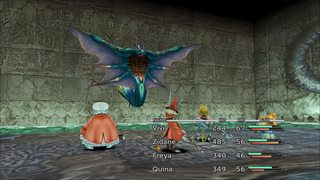 Last week I was still getting the hang of the ATB battle system. I definitely got the hang of it later in the game, but I’m sure I could still play lot better. I still struggled a bit against some of the late game enemies and bosses, getting a few overs against the latter and needing to grind up a bit and get better gear. Some of my teammates still died in those battles even after gaining about 10 levels. I don’t know if the problem was my party composition, like maybe I should have had someone in the party who could cast Auto-Life so that the instant death spells some enemies used wouldn’t be so annoying? Like I said, there’s definitely room for improvement in how I handled battles, but I really enjoyed the system overall. I love the “old school RPG” nature of some of its rules, like how you can cast healing spells like Cura on Undead enemies to damage them. One specific complaint I have that only really became irritating in the late game is that I wish there was a way for me to easily check what elements my team resisted or absorbed during battle. The resistances depend on the equipment a character has on, but I never found a way to check them in battle. If I could have checked, it would have given me an easy way to determine if having Vivi cast Thundaga on a character would kill them or heal them based on whether their equipment absorbed the Thunder element or not.

I really like the characters, setting, and plot. Like I mentioned last week, I think the opening to Final Fantasy IX is extremely strong. It really drew me into the fantasy world and got me curious about the world and characters, and quickly got me wondering what would happen next. Not that the plot through the rest of the game is weak. There are some lulls in the action from time to time, but I was always invested in what was going on with these characters and the world. There are also numerous animated cutscenes that are used to tell key moments of the story, and I really liked these too since they allowed the characters to be more expressive than their in-game models could be. 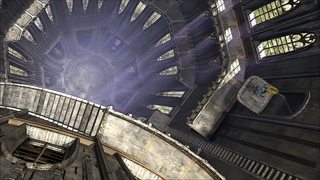 Of course, a key part of my experience was Moguri Mod/Memoria Mod. Memoria Mod contains a series of engine tweaks, like widescreen support and increased battle FPS, while Moguri Mod is built on top of it and replaces all the pre-rendered backgrounds with upscaled HD versions. Without these mods, I probably still would have enjoyed Final Fantasy IX, but I think I enjoyed it a lot more because of these mods, so a big thank you to the fans who created and maintain these mod projects!

Final Fantasy IX was intended to be a celebration of the Final Fantasy series, especially its roots, and having played the original Final Fantasy as well, I definitely understand that. The medieval fantasy setting is reminiscent of the original game, with its own unique charms mixed in like the anthropomorphic character races. There were some frustrating bosses at some points, but it was a beautiful experience overall. It checks all the boxes I want in a JRPG: great characters, epic story, plenty of sidequests, and mini-games. I really enjoyed it!

There’s another large cast of characters in this game. I know it’ll be a while before I remember all of their names. What’s interesting is that many of their designs seem to be the same as characters from the first game, just with different features if that makes sense. Like, Nekomaru is basically Sakura, but male. They seem to have different personalities though, so they really are different characters, some just resemble characters from the first game more than others. Maybe that’s just the artist’s style…?

Some new features include a level up system, where you gains levels by walking around, examining things, and talking to people. Basically, you level up by doing the things you normally do in the game, which isn’t that different from leveling up in most RPGs now that I think of it. You can also raise a digital pet, which is pretty much a Tamagotchi. It grows based on how many steps you take, and you have to clean its poop every so often or else it’ll become filled with despair just like a real pet. This pet raising thing is completely optional, but I guess there’s some type of prize if you take good care of it. I’m going to try to keep it in mind as I play.

Anyway, the premise of this game is largely the same as the first…or is it? You play as Hajime Hinata, a new student at Hope’s Peak Academy. You’re meeting your class on the first day of school, when all of a sudden the talking stuffed animal Usami shows up, and the classroom walls fall away to reveal that you’re all on a deserted island!

Usami reveals that this is a class trip, and the class is expected to live together peacefully on the island. Once they all become friends, they’ll be allowed to leave! There’s a peppy and colorful animated intro, and the Prologue begins.

You walk around and introduce yourself to your classmates, getting a feel for the island’s facilities. It’s actually a series of islands, but in the beginning only the central island and one other are available to you. There’s a convenient store, a hotel, and even a ranch on the island, so it’s not like these kids will be scavenging for food or shelter. Hajime is pretty pessimistic and doubtful of Usami, but just when he’s beginning to get used to the idea of happy, peaceful island life, things take a drastic turn.

Monokuma shows up and takes over, and he’s got a different idea in mind for the island class trip. Now, the only way to leave the island will be by killing one of your classmates. Naturally, everyone is shocked by this sudden turn of events, except the player who, let’s be honest, is here to see the killing game unfold. In the killing game, when a murder occurs, the group is given time to investigate before a class trial is held. After the group deliberates at the trial, they must pick who they think the murderer is. If they’re right, the murderer is executed and everyone else gets to continue living on the island, but if the murderer fools their classmates, then everyone except they is executed, and the murderer gets to leave the island.

…And that’s the end of the Prologue! I admit, I was a little fooled by the initial “you will live a peaceful life” routine. I hadn’t read into the game in advance, so I didn’t know if it followed the same killing game situation as the first. I don’t know how a “peaceful island life” visual novel would have played out, but I was willing to give it a shot. Then, everything came crashing down, and I happily welcomed another Danganronpa killing game. Maybe that’s morbid, but the writing and murder mysteries of the first game were so good, I’m really excited to see what this sequel has in store!