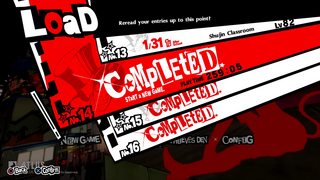 Finally got 100% Award completion in the Thieves Den! This earns you the ability to summon Personas from the Compendium for free, and also gives you an accessory that makes you invisible to enemies in the overworld if you equip it, letting you avoid battle extremely easily if you want to. These are really cool completion bonuses! They’re really overpowered, but at this point it doesn’t really matter since between PatronusLight and I this is our 3rd playthrough of the game in New Game+, and we were already super overpowered anyway.

Now there should only be a few items we don’t have unlocked in the Thieves Den. As far as I know, we can unlock them all by completing the game with the original Persona 5 ending, which is something PatronusLight plans to do soon. 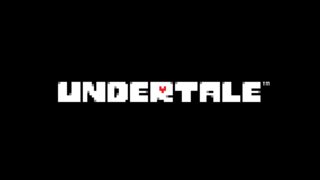 I played through Undertale for the first time this week, and hoo boy what a game. It’s surreal, surprising, hilarious, and heart-wrenching at various times. Your choices matter at various points in the game, and I was surprised at how much regret I felt at some of the decisions I made. I think it’s the kind of game best gone into without any prior knowledge, like I did, so I won’t fault anyone who hasn’t played it skipping the rest of this section!

The premise of the story is pretty simple. You control a human child who falls into the underground world of monsters, where they were sealed long ago after an ancient war between humans and monsters. One of the first monsters you encounter is the motherly Toriel, who takes you under her care. Thus begins your journey in the world of monsters!

Battles in Undertale are pretty unique. You have several options in battle, the first of which is Fight. Fight brings up an interface where you time a button press to stop the vertical line near the center of the screen to deal more damage. I really like this kind of timed action in other turn-based RPGs, as it adds nice interactivity to combat.

In Undertale though, you don’t have to use Fight most of the time if you don’t want to. There are also “Act” options that differ depending on what enemy you’re targeting. For instance, you can try talking to or complimenting some enemies. Doing so may allow you to Spare them using the Mercy. The last and perhaps largest part of combat is dodging enemy attacks, which plays sort of like a bullet hell mini-game. You control a red heart during this, and must dodge the projectiles and weapons the enemies throw at you. Each enemy type has several unique attack patterns, which keep this part of combat feeling fresh. It also leads to some intense and hectic boss battles!

Like other RPGs, Undertale features quite a bit of exploration and puzzles. You’ll explore a wide variety of locales on your journey, filled with NPCs with interesting and bizarre dialogue. On that note, it definitely feels like it takes a page from Earthbound’s book. Some of the NPCs and situations are just so surreal, the only other game I’ve seen that does anything like them is Earthbound. Many of them brought a smile to my face, simply because they were so unexpected. Undertale subverts expectations to great comedic effect many times.

The flow of the game is primarily explore, solve puzzles, and fight bosses, with a few random encounters thrown into the mix between parts. The puzzles might start out quite basic, but there were a few that required me to think pretty hard near the end. All were well designed though, and it was fun working through the more difficult ones.

Also, there’s some awesome music in this game! Every boss battle is made especially epic due to the great unique tracks that play during them. My personal favorite was Spider Dance, which plays during one of these great boss encounters!

Undertale is pretty short, which is good because you’ll probably want to play through it multiple times to see different endings. I have a feeling it will stick with me for a long time. It’s just such an emotional journey. I smiled, I felt regret, and I was moved to tears, all within the span of its 4 to 6 hour playtime. I didn’t get the “true/good” ending though, and to do so on my save I’d have to replay the game from the start. I started a second playthrough, and played through a few choices I’d regretted the first time around, this time making choices I feel good about. I’m feeling content with the Undertale I’ve played for now though, so I don’t plan on finishing a second playthrough right now. Instead, I’ve read the endings section on the Undertale Wikia, and watched some videos of the ending on YouTube. The true ending is definitely worth seeing, so I’m really glad I looked it up!

I started playing the Steam version of Final Fantasy IX this week! The Steam version released in 2016, but the game originally launched on the original PlayStation in 2000. I missed out on that version, but I’m finally experiencing it now on PC! 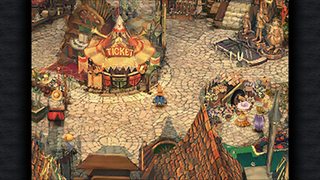 First off: a disclaimer. I have no problem with PS1 pre-rendered backgrounds. I find them to be quite charming. Final Fantasy IX uses pre-rendered backgrounds and fixed camera angles for all non-World Map areas. With this port, the 3D character models are a rendered at whatever you set your display resolution to, while the original pre-rendered PS1 backgrounds are simply upscaled to fit this resolution. In my case, this is 1080p. I like how these models look at 1080p, but the backgrounds looked a blurry in comparison. I bet it looks great on a PS1, and I sort of wish the Steam version had a mode that let you render the models at original resolution and maybe even imitate the PS1’s iconic rendering, so that the 3D models would be pixelated and display as originally intended.

Since that’s not an option though, I did some Googling and chose to check out “Moguri Mod,” which does quite a few things, but namely replaces all the pre-rendered backgrounds with HD pre-rendered backgrounds upscaled from the originals using a machine learning technique called ESRGAN. The look of these sometimes varies, with some looking sharp and beautiful, and others having a more painted look, but I like them either way. I played just about an hour of the game before deciding to look up mods, so some screenshots will likely look noticeably different since they were taken before I installed Moguri Mod. Moguri Mod is built upon Memoria Mod, which adds some nice quality of life options to the PC port, like a widescreen option instead of the original 4:3 aspect ratio. It also lets you adjust the FPS during battles, which is at 15 FPS by default. That felt really sluggish and choppy to me, but I’m sure it was faithful to how it ran on PS1. I increased the battle FPS to 20, and found that it feels a lot better.

Anyway, as far as the actual gameplay, story, and characters go, I’m really enjoying things so far! My experience with the Final Fantasy series is pretty limited. In the main series, I’ve only finished Final Fantasy I & II: Dawn of Souls on the GBA, but I also played Final Fantasy III and IV on the DS, but I never finished those. Final Fantasy IX reminds me of the entries I’ve played in that it lets you name all the characters in your party. I’ve stuck with the default names so far. There’s Zidane, the “Tailed Human” thief. He has a monkey tail. Vivi, a young Black Mage, Steiner, a royal guard captain, and Dagger, who is really the runaway princess Garnet and seems to be the White Mage of the team.

The opening makes quite an impression. It’s full of FMVs that show off a theatre troupe airship soaring through the air and docking at Alexandria Castle, and also serves as opening credits, displaying the names of prominent members of the development team. The airship belongs to Tantalus, who are a group of thieves. Zidane is a proud member, and is a key figure in the mission they’re planning to undertake: kidnapping Princess Garnet! The mission goes awry when Zidane discovers Princess Garnet has decided to run away from the castle, and she actually wants him to kidnap her. The confusion that ensues causes Queen Brahme to discover their plot. As their airship takes off with Garnet, Vivi, and Steiner on board, the Queen tries to shoot it out of the sky. They escape the city, but with the damage their ship sustained it soon crashes in the Evil Forest. Thus, your initial party of four band together.

As far as the battle system goes, I’m still getting the hang of parts of it. It uses the Active Time Battle (ATB) system that several prior Final Fantasy games used as well. In this system, you can only choose an action for a character when their ATB guage is full. The same applies to enemies I think, but you can’t see thair ATB meters as far as I know. The ATB meters fills as time passes, but time pauses when you’re in menus picking items or magic, at least when using the “Wait” setting. You can also change it to “Active,” which makes time pass even when in menus, but that’s only recommended for advanced players and that definitely doesn’t describe me at this point! I died several times to early game bosses. I wasn’t prepared for how carefully I’d need to watch my health and actively heal my characters using items. Like I said, I’m still learning the ropes of the ATB system, but it’s been enjoyable so far!

Abilities in Final Fantasy IX are pretty cool too. Many pieces of equipment provide access to Abilities while equipped. Certain abilities can only be learned by certain characters though. Like, Zidane can’t learn magic abilities, but Vivi can because he’s an awesome mage. A character can learn these abilities to make them permanently available by gaining AP through winning battles. Once an ability is learned, you can equip that ability to the character without needing the equipment. Characters can only equip so many Abilities at a time, as determined by their max AP pool. This system reminds me a lot of how Abilities in Final Fantasy Tactics Advance work, and it’s incredibly likely that FFTA’s system was heavily inspired by FFIX. If Abilities in FFIX offer as much flexibility as the system in FFTA, it’s sure to be amazing by the late game!

That’s about it for my time with Final Fantasy IX so far. It seems like it will be a really nice RPG experience, and I’m looking forward to seeing where things go!