Fair warning ahead of time: there are spoilers for the end of Trails of Cold Steel II! I don’t spoil some of the major plot points, but if you haven’t finished that game and want to remain unspoiled, you shouldn’t read that section! You’ve been warned!

I started a New Game+ playthrough of Persona 5 Royal. This is using the clear data from PatronusLight’s New Game+ playthrough, so it’s like New Game++ and I’m using the strongest possible Personas. I have a few goals with this playthrough: name my character something amusing (I went with Senpai Kun) and laugh at how dumb it makes some dialogue, romance all the eligible confidants except Ann, and do all this while completing the game as fast as I can.

The reason for these specific goals is to unlock the remaining rewards in the Thieves Den. I maxed out Ann’s confidant, which means I already unlocked one of the awards, the one for reaching max friendly confidant rank with all the female confidants. There’s another for reaching max romantic confidant rank with all the female confidants, and that’s one of the reasons for my playthrough goals. I also am making full use of costumes for the characters this time, since it’s definitely not a serious play-it-for-the-story playthrough.

That’s pretty much my playthrough in a nutshell. I’m about halfway through already. When you skip all the cutscenes, it’s pretty impressive how quickly you can advance through the game. Well, “quickly” by Persona 5 standards. I’ve still put in probably around 10 hours of playtime so far, maybe more.

Another villager moved to Stardew this week, Chops the pig. I talked to him the day he moved in and literally haven’t seen or spoken to him since. Granted, I did play a lot less Animal Crossing this week than in weeks prior, so that could have something to do with it.

Other than that, the only other development I can think of is that the new wing of the museum for art is done. So far I only have 1 piece of art displaying, the painting I got from Redd the first day he was in town. I haven’t visited his shop yet to try my luck at finding the real painting among the fakes.

The Legend of Heroes: Trails of Cold Steel II (PC)

I finished my playthrough this week! The road to the end was a long one, but I’ll be as brief as possible! I will post screenshots of late game dungeons and bosses, as well as talking a bit about the final acts, so there will be spoilers! 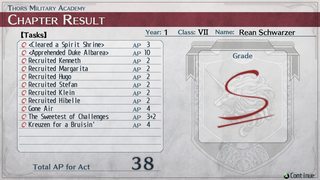 Naturally, I completed even more side quests than ever before during one of the chapters! I managed to get an S rank on it, that was a nice surprise! Seriously, the chapters in Act 2 of this game were packed with side quests and other stuff to do. I’m amazed I got an S rank, but I still probably missed some optional things in those chapters.

After that, things got serious in the main story. The final confrontation drew near, and we entered the Infernal Castle. This dungeon was long, but I enjoyed the puzzles and enemies it had to offer. As a final dungeon, its length and layout felt very fitting! There were several boss fights along the way until we reached the top for the epic conclusion of this game’s story, which I won’t spoil. When the curtain closed on the Finale act of the game, I was delighted at the ending Falcom had delivered. Then I realized the game wasn’t over yet.

In a move that baffled me at first, there were more acts and playable chapters in the game. The act after the Finale focused on different characters than all the other acts, one of whom was Lloyd Bannings. I didn’t know this character’s name, but I recognized the character design and knew what he was from. Lloyd is from another Legend of Heroes arc, a pair of games that tell the “Crossbell Arc.” I think I’d heard that he had some involvement in the third and fourth entries in the Trails of Cold Steel series, so when I was him it was pretty cool. Unfortunately, the games in the Crossbell Arc have never been officially localized and released in English. When Lloyd was name dropping a bunch of other characters I hadn’t heard of and reminiscing about his earlier adventures, all I could do was stare blankly at the screen. I really hope the Crossbell games get an official localization at some point, because I want to play them more than ever! If nothing else, I know at least one of them has a complete fan translation.

After finishing the chapter with Lloyd Banning, the Epilogue act began, returning to the characters I’d become very familiar with over the course of Cold Steel 1 and 2. I expected this act to just be more cutscenes, revealing how the characters were faring in the aftermath of the Finale. It did reveal how the characters were faring and what their futures now held, but it was another fully playable chapter as Rean and company, which I did not expect. There was even another dungeon at the end here! By this point, I was like “okay, this has to be the final dungeon.” The dungeon here was pretty interesting. Much like Tartarus in Persona 3, it consisted of randomly generated floors that changed layout every time. Thanks for my time with Persona 3, I really like this kind of thing actually, so it was actually fun to go through and I made it a goal to see how quickly I could make it through all the floors. Eventually, we reached the true final boss. This one absolutely destroyed me on my first attempt, and I ashamed picked the “weaken enemies and retry” option on the Game Over screen. I didn’t have time for grinding to defeat a powerful boss, I just wanted to see the end of the game!

With that obstacle out of the way, the game was truly over this time. The characters said their good-byes, with all the members of Class VII going their separate ways. This was a really nice way to end it actually, and I finally saw what Falcom was going for by including these extra acts after the Finale. For one, it was a way to tease what I assume the plot of Trails of Cold Steel 3 and 4 revolve around, by introducing Lloyd into this arc. And secondly, the final dungeon was one last challenge that Class VII had to overcome together before saying their good-byes. I didn’t realize it during the Finale, but Cold Steel 1 and 2 seem to make up a smaller “Class VII Arc” in the greater Trails of Cold Steel storyline. It was only fitting they received a proper send-off, because I imagine things will be very different for these characters in the next 2 games in the series. That said, it was still pretty jarring going from the incredible action and intensity of the Finale act to the relatively much more calm and subdued chapters afterward.

Between Cold Steel 1 and 2, I’m not sure which I enjoyed more. The first had so much exposition to get through before it really picked up, whereas 2 gets going right out of the gate. The sequel also introduced the Overdrive mechanic in battle, which was a lot of fun. I don’t think I can pick one I enjoyed more. I’m going to chicken out and just say I enjoyed them both. They were great, and definitely left me curious what the other Trails arcs have to offer! My plan is to play the Trails in the Sky trilogy next, because I believe those tie into Trails of Cold Steel eventually. I’m not sure when I’ll start Trails in the Sky…but it’ll happen someday!