There are a several late game spoilers for Tokyo Mirage Sessions ♯FE Encore this week, including final boss spoilers. If that’s something you want to avoid, you should stop reading now. You’ve been warned!

I played a ton this week, and finished the game!

The rest of the EX Story chapters became available while I played, which meant I got more costumes for my party as I explored and found the treasures chests in the EX Story dungeon. Some of the highlights among these were a Nurse costume for Kiria, an Etrian Odyssey Nexus costume for Ellie, and a costume I had no idea was in the game, a Fire Emblem: Three Houses costume for Mamori that makes her resemble Annette. This was such a surprise to find! I was expecting only costumes from Atlus games but it makes a lot of sense there would be Nintendo ones as well!

As always, a lot of my time in Tokyo Mirage Sessions this week was spent doing character side quests. Also as always, these were quite entertaining! I don’t have much to say about them in particular, so I’ll just leave a few screenshots below.

On the main story front, the group finally learned who the evil mastermind behind the Mirage attacks was: a Mirage called Gharnef who wants to perform a ritual called the Opera of Shadows in order to resurrect the Shadow Dragon and destroy the world. The final dungeon of the game appears, but before Itsuki and company can head in they have to break the barrier blocking their path.

Breaking this barrier is the main goal of chapter 5, which begins with the player getting the ability to break walls that they couldn’t before. This opens up new areas in basically every dungeon in the game up to that point, and you have to go back to each one and complete some objective in the newly opened areas. This kind of thing can be tedious if done poorly, but I’m pleased to report it was handled very well here, and I actually enjoyed returning to the old dungeons to explore new areas! The areas were filled with stronger new monsters which dropped new materials, which in turn meant new weapons and skills could be crafted, and it continued to feed into the very compelling gameplay loop.

I was surprised in the final chapter when we broke the barrier to the final dungeon, but weren’t immediately able to enter it. The group first had to explore a smaller dungeon to gain the powers of ancient Fire Emblem heroes of the past. This would allow them to perform the Opera of Light to summon the Divine Dragon, who they needed to fight back against the Shadow Dragon. This dungeon mainly consisted of boss battles against the spirits of the ancient heroes, who resembled the Mirages of the party. 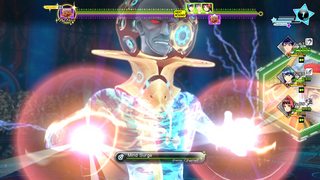 At the end of this short dungeon, Gharnef was waiting. There’s a boss battle against him, and it was a pretty easy one. I think the fact I was playing on Normal difficulty, and that I’d done a lot of side quests and a bit of grinding beforehand, meant my team was well prepared for this fight. The group defeats Gharnef, and can finally enter the final dungeon of the game where the Shadow Dragon, Medeus, waits.

The final dungeon took me much longer than I expected. It was a little long, but it really didn’t help that I got stuck on a puzzle in one of the sections for probably over an hour. Anyway, the structure of the dungeon was pretty cool. In between each exploration and puzzle solving segment, you have to fight a boss from earlier in the game. Having been newly resurrected by the Shadow Dragon, they all had major bones to pick with Itsuki and company!

After all of those bosses were dealt with, it was on to the main event: Medeus. As expected with an RPG, a lot of plot stuff happens prior to the final battle beginning. To summarize, Itsuki absorbs the spirit of the Hero-King Marth, and he and the rest of the party fly high into the sky to confront the Shadow Dragon while singing a song set to the melody of the Fire Emblem theme. Then it’s final boss battle time! 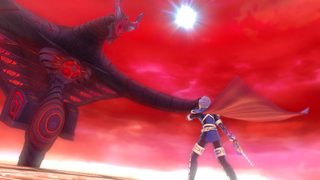 Medeus had some nasty tricks up his sleeve. One of his attacks had a chance to cause Seal on the entire party, preventing them from using any Skills, and this unfortunately affected every active party member at one point. I didn’t have any items to heal status ailments for the entire party, so I solved this by changing out party members and using individual status ailment healing items. He could also cause a unique “Burning” status effect. This was like a strong poison, and dealt damage each turn while also making the character weak to fire attacks while they were Burning. Other than the status ailments though, the battle went pretty smoothly! There were two forms to the battle, but the second one seemed easier than the first. What really helped I think is the Wyrmslayer skill I had on Itsuki. It was a Sword type attack, but had the added benefit of starting a Session against Dragon Mirages, regardless of their Sword resistance. And what a coincidence, Medeus was a Dragon-type Mirage! I had Itsuki whale on Medeus just about every turn with Wyrmslayer, leading to about a 9 combo Session each time.

With Medeus defeated, the Mirage attacks around Tokyo have stopped, and peace has quickly returned. Of course, the public never knew they were in any danger, and the party receives no recognition for saving the world. Typical, am I right? Anyway, there’s a little epilogue where you can speak to each party member and get a final little dialogue scene with each of them. Most of them are wondering what they’ll do now that they don’t have to fight Mirages anymore, but they’re all hopeful for their future with Fortuna Entertainment.

The credits roll, and I was a little disappointed they were just a basic text crawl. No character artwork or even stills from the game’s cutscenes in the background. There was another original song that played during the credits though, and it was alright. Afterward, each character gets a little “where are they now?” style blurb that explains what they went on to accomplish. Itsuki’s is last, and consists of a little cutscene in addition to his text blurb, where Maiko reveals that she’s returning to her modeling career, and making Itsuki Fortuna Entertainment’s new president. Apparently, this is the “true” ending, and I only got this one because I completed all the character side quests and talked to everybody during the epilogue. I question whether a high school student can properly run an entertainment agency, but other than that, it was a good ending.

With that, my time with Tokyo Mirage Sessions was at an end. It was a lot of fun! Like I said, the main plot didn’t really go anywhere until chapters 5 and 6 and then it basically all happened at once, but this isn’t really a game focused on the main plot. Instead, it’s way more focused on the characters, which were all very enjoyable and had nice little character arcs in their side stories. I’m really glad I picked this one up!