I’ve heard Hollow Knight spoken of very highly in metroidvania circles on the Internet, and from a friend who played it a while back. As a fan of the genre, I’ve been curious about it for a long time. But, it wasn’t until recently that I finally reached Hollow Knight in my backlog, and found out for myself what all the fuss was about.

Hollow Knight follows the player character, the Knight, as they explore the ruined kingdom Hallownest. One of the first things anyone will probably notice when starting this game is the art style. The characters and environments of Hallownest have this beautiful, hand drawn look that never gets old.

The environments you’ll explore are very diverse too. Some are overgrown and wondrous relics of a bygone age, while others are dark and unsettling insect-riddled caverns. Somehow, these environments don’t feel shoehorned together, but instead transition and flow naturally, and make the Hallownest feel like it could be a living and breathing world.

Despite being insect creatures, the cast of Hollow Knight is incredibly charming, both due to the art style and the dialogue. You’ll get to know both humble explorers and bristly braggarts alike on your journey through Hallownest. They don’t say very much, and there are very few cutscenes in the game, yet I still feel like I grew to know a lot about these characters based on the little they do say, and the way they say it. Plus there’s little voice clips for them, where the character will say a short phrase or greeting in their insect language, and these really conveyed a lot. The way the shopkeeper Iselda sighs when you speak with her is just perfect!

The Way of the Nail

That’s not to say all the insects you’ll encounter are friendly though. On the contrary, the majority of creatures you’ll find in the Hallownest are hostile enemies, and you’ll fight to the death with them. There are dozens of different kinds of enemies in Hollow Knight too. As you encounter them you’ll quickly grow familiar with their attack and movement patterns, and learn how to dispose of them effectively. 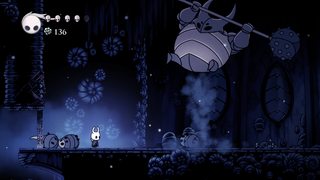 Combat in Hollow Knight is incredibly rewarding. You’ll begin with only your nail, the equivalent of a sword, to protect yourself. Over time, you’ll find new abilities like spells and charms which give you new options in battle. You’ll be glad to have these options against many bosses in the game too, because they can be quite a challenge! Just like regular enemies, bosses have their own attack patterns, but they’re much more complex than a regular enemy, and they also generally have a wider range of attacks that they’ll throw at you.

I found myself dying to some bosses time after time. Luckily, the game handles death in a fair way. When you die, you leave a Shade near the location of your death, and lose all the money you were carrying. You’ll respawn at the last bench you rested at, which function as the game’s save points, although it also saves automatically when you quit. If you can reach and defeat your Shade without dying, you get all your money back. If you die before defeating your Shade, that money is gone forever, because the original Shade disappears and a new one is created wherever you just died. This definitely lead to at least one frustrating instance during my playthrough where I lost a lot of money, but it still felt fair. The rest of the progress you make, like exploring new areas or finding new items or abilities, is kept on death. With as often as I was dying when I first started, I’m very glad my progress wasn’t completely reset with each death, and I think the system implemented here works well with the rest of the game.

When Hollow Knight begins, your movement options are limited to running and jumping. As you explore, you’ll find items which grant new movement options, allowing you to reach and explore areas you couldn’t before. This sort of gated progression is the heart and soul of the metroidvania genre, and it is implemented very well here. You’ll regular see ledges and other sorts of obstacles that you’re unable to reach the first time you explore an area, and each time I came across one it served as a tantalizing promise of exciting new traversal abilities to come. Plus, movement just feels so fluid once you’ve unlocked all the movement abilities!

As a metroidvania, there’s one gameplay element that sets Hollow Knight apart from the other games in the genre I’ve played, and that’s the map system. The system works well for Hollow Knight, but it is significantly different from the usual grid-based maps I’m used to.

Before you can look at a map for an area in Hollow Knight, you’ll need to purchase a map of the area from the cartographer, Cornifer, who conveniently seems to be exploring and mapping out the Hallownest just one step ahead of you. That is to say, when you find a new area, Cornifer is always waiting there somewhere, eager to sell you a map of the area for a very reasonable price. His telltale humming gives him away, and my first order of business whenever I reached a new place was always to track him down, so I could referring to a map of the new area and planning my exploration of it.

Once you’ve bought a map, an initial set of rooms will be revealed. This is always far from the complete layout of the area though. To reveal the rest, you’ll need to explore beyond the revealed edges of the map yourself. After you’ve visited uncharted areas of the map, the next time you rest on a bench, the Knight will be shown scribbling notes on the map, and all new areas you reached will be revealed on the map. This system is quite interesting. Being without a map in a new area is sort of an exhilarating experience, and made exploration feel like more of an adventure.

Christopher Larkin composed the music for Hollow Knight, and did an incredible job of it. The music really adds so much emotion to the experience. Beginning with one of first tracks you hear, the Dirtmouth theme, the music perfectly captures the somber, desolate feeling of the ruined kingdom. But amid the desolation, there’s also beauty and wonder, and the soundtrack does an amazing job capturing those emotions too.

As I mentioned earlier, combat is often an intense, heart-pounding experience. The boss music definitely reflects this. The boss battle themes change the pace and atmosphere and never failed to get me in the zone to fell the monstrous bosses of Hollow Knight.

One track that stood out in particular to me was the City of Tears theme, and it really amplifies the sense of wonder, hope, and curiosity I felt when first exploring that part of Hallownest. I’ve embedded a player from the composer’s Bandcamp page below, I definitely recommend giving at least this track, City of Tears, a listen.

The sound design was also done by the composer, and it is executed just as effectively as the music. The sounds of teeming masses of insects scuttling around in some areas, and all the other atmospheric noises, really make for some immersive exploration. 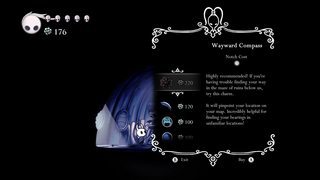 I will admit, there were some frustrating moments near the beginning when I was still learning the ins and outs of Hollow Knight. The beginning was a little slow. It’s still weird to me that the Compass is something you need to buy from the map shop in-game, and that it takes up one notch to equip. I feel like I didn’t really start playing the game until after getting the compass, and all the exploration prior to that was just blindly stumbling around.

I’d heard a lot of hype for Hollow Knight before I played it, and I was honestly a little skeptical going in. It couldn’t really be as good as I’d heard, could it? But somewhere in the middle of my playthrough, that skepticism went away completely. Hollow Knight was incredibly fun to play, and definitely lived up to the hype for me! The game is an outstanding achievement for developer Team Cherry, and I highly recommend it to anyone looking for a new metroidvania to play, or anyone looking for a game with rewarding combat and exploration!