Be warned, minor spoilers may be contained within. Since The Banner Saga 3 is the last part of the trilogy, there are likely going to be some spoilers for some events from the first two games. If you want to totally avoid all potential spoilers so you can play these games yourself in a blind run, you shouldn’t continue reading!

So I started this game this week. I was looking forward to a nice, straightforward, relaxing Kirby game. I got about halfway through, and realized it just wasn’t really clicking for me, and I’d rather just drop the playthrough there, so I won’t be continuing on with Kirby & The Amazing Mirror. At least, not right now. 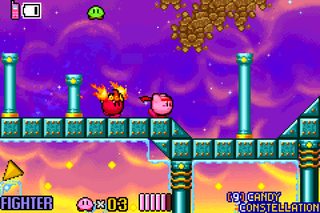 What I didn’t know going in is that this game is pretty much what you get when you add metroidvania elements to a Kirby game. I think my biggest issue with it is that while it has a large, interconnected map, it lacks the upgrade system that I associate with a metroidvania. In its place, Kirby has his usual copy ability, and he does need certain abilities to progress through certain paths. But that doesn’t really feel the same, because now when you find a path that requires a specific power, you have to either hope an enemy with that power is nearby, or backtrack to wherever you can absorb that power and make it back to the place you need to get without losing that ability. The latter is the part I had a hard time with. There were some frustrating instances where I was trying to take a certain path but would keep losing the ability I needed when enemies hit me. You have a window to get the lost power back, as it transforms into a group of stars and bounces around, but it kept bouncing away or I’d get hit by more enemies until the lost ability just vanished. So that was really frustrating, and frustration is not what I expect or want from Kirby.

Other than that, the connections between the levels are pretty random. You go through doors that connect rooms of a world and worlds to other worlds, but without checking your map constantly, there’s not much rhyme or reason as to which door connects where. When a room has multiple exits, you can get a general idea of where on the map each exit will take you, but it’s not as clear cut as the strictly grid-based maps that you’d see in a Metroid game.

On paper, Kirby & The Amazing Mirror is a really interesting concept! As a metroidvania fan, I was really interested in the idea. And the idea is executed pretty well in The Amazing Mirror. I do think it’s a good game, it just wasn’t really clicking with me. I probably made it worse on myself by trying to play it immediately after finishing Castlevania: Symphony of the Night. The metroidvania elements of The Amazing Mirror don’t even come close. The other problem might be that I was playing single player. You can play cooperative multiplayer in The Amazing Mirror with up to 4 players as long as you have a link cable and copy of the game for each person. In single player, the AI controls the other 3 Kirbys, and you really only have them join you in an area when you summon them using Kirby’s cellphone. I feel like multiplayer might have been more enjoyable, but I’ll probably never experience it myself.

The story set in motion in the first two Banner Saga games was wonderfully grim, and I am happy to say that The Banner Saga 3 has picked up right where they left off, and is as bleak as ever! 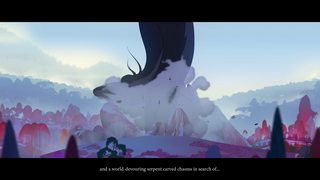 Since it’s been a while since I played the first two games, I don’t remember the details of the plot. Luckily, there’s a recap option on the main menu of this game, and it at least got me up to speed on the main points. The sun has stopped in the sky, a giant serpent has torn through the land, a race of creatures called Dredge have returned, and a great darkness is swallowing the entire world. It’s basically the end of world. That’s where The Banner Saga 3 begins.

The story follows two groups, jumping between them after each chapter like a novel. There’s the group at the city of Arberrang, which is basically the last standing city in the world, besieged by starving refugees and Dredge, and there’s the group that’s plunged into the darkness, protected by the magic of the Valka, Juno, and lead by Iver, a member of the race of giants called Varl, in order to try and stop the darkness from spreading further.

As you follow these two groups, you’re put in control of important figures in each group during the story sections, and therefore get to make decisions that have notable consequences for that group. I’ve always thought of this part of the gameplay as sort of an “Oregon Trail” segment, especially since you see your group’s caravan travelling in a side view, sort of like The Oregon Trail, but much prettier.

The other half of the gameplay are the turn-based battles. The bottom left shows the turn order, where order always alternates between one of your units and one of the enemy units. On your turn, you can move your unit, then attack or use a special ability. Movement always occurs first. You can choose not to move, and simply attack, but then the unit won’t get a chance to move that turn. Every unit has an armor (ARM) and strength (STR) value. STR functions as both HP and attack, while ARM protects from damage against STR. So to defeat a unit, you’ll likely first need to attack their ARM to make it easier to deal damage against their STR. It’s difficult to explain, but it’s a pretty easy system to pick up, and tons of fun to play. 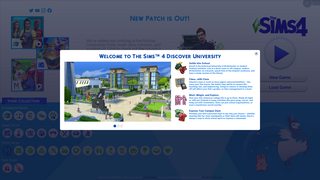 Naturally, I loaded up my trusty Covarrubias family save, to enroll my good old vampire, Kaleigh Covarrubia, into a university! For some weird reason though, when I first loaded my save, things were a little messed up. Icons for some of the neighborhoods were missing on the world select. Textures on some Sims were missing or corrupted or something. That sort of issue extended to the foliage as well. It was pretty surprising, but luckily using the Repair Game option in Origin fixed everything. Not sure what happened there, but with the weirdness resolved, I could start Kaleigh’s college application!

The first step for Kaleigh was applying for scholarships. She was eligible for a lot of them, but I picked just 3. After applying, it was time to wait and see if she got the scholarships. So, in the meantime I had her to go a gig for her acting career. This gained her enough fame to finally push her into the 5-star celebrity category, making her a Global Superstar. This earned her more Fame Points, which I spent part of to buy a perk that instantly made people her friend when she introduced herself. For Kaleigh, that meant it would be easier for her to satisfy her vampiric thirst, as sims are more likely to agree to let a vampire drink from them when they are friends.

After a small delay, Kaleigh heard back and had gotten all 3 scholarships. She then applied to university, which was another short wait. Naturally, she was accepted to university. What school wouldn’t want a celebrity vampire among their student body, right? Then came the hard choice: which school to go to? I decided on the University of Britechester for Kaleigh, because they offered a Distinguished Degree in the Culinary Arts. An amusing choice, because Kaleigh is a vampire who can’t eat human food, yet with this degree she could easily become a renowned chef or food critic. You can have sims take anywhere from 1 to 4 classes per term at university. The more classes you take, the fewer terms you have to go through to get your degree, but obviously more classes means more coursework. The next step in enrollment is choosing where your sim will live, and I had Kaleigh move into Drake Hall, one of the dorm options for the University of Britechester. And finally, the last step before your sim heads to university is paying for tuition for the term. Luckily, Kaleigh’s scholarships covered all of the tuition for the term, so she paid 0 simoleons! No student debt for Kaleigh Covarrubias! 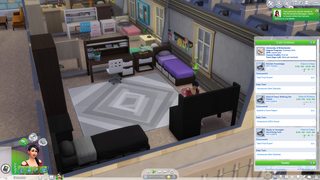 With 3 classes and no electives her first term, and Kaleigh was able to keep up with the coursework for all of the classes, but this was without sleeping. I have no idea how non-vampire sims would be able to get all their homework done before each class.

Since it’s a dorm, Kaleigh shares a small dorm room with a roommate. They really hit it off, largely in part to the Fame Perk that makes Kaleigh friends with new sims instantly, and Kaleigh wasted no time in asking her new roommate to serve as her primary source of plasma on campus.

Despite not having lived with her parents or other guardian figure for a long time, Kaleigh still couldn’t contain her enthusiasm at being out on her own, and threw a juice keg party one of the first nights of the term. I swear I didn’t invite him, but her grandfather Demario showed up just in time to watch Kaleigh tap the keg. He must be so proud of his vampire protégé. Kaleigh did invite her pre-university roommate, Celeste the witch, so they could hang out and bond. That was the night Kaleigh learned that despite her intolerance for other human food, apparently juice doesn’t make her nauseous!

There’s a new romantic interaction added with this pack, Shower Woohoo. Obviously Kaleigh had to try that too. Not very considerate of the other sims using the dorm showers, but what are they going to do to stop a world famous celebrity vampire from doing whatever she wants?

So, things have been going quite well during Kaleigh’s first term at university. One of the perks of having superhuman vampiric abilities is that rather than riding a bike to class, Kaleigh just runs at inhuman speeds. She doesn’t really have an excuse for being late…but she still was one time. Classic university experience, right?