Symphony of the Night puts you in control of the vampire Alucard, son of Dracula. Unlike his father, he is an ally to humans. When Dracula’s castle reappears, Alucard awakens from his slumber and heads into the castle to investigate. He leaps over the closing drawbridge, just making it into the castle grounds. From there, his fate is yours to command…

Putting the “vania” in metroidvania

The abilities you collect as Alucard are pretty cool. As you progress, you’ll gain the ability to transform into a wolf, a bat, and even mist. Transforming into a wolf admittedly doesn’t gain you much in terms of exploration utility, but the other abilities open up new areas for you to explore, which is just as satisfying as in any metroidvania.

Besides the traversal abilities, there are also Max HP and Max Hearts upgrades strewn throughout the castle. These are very similar to the Energy Tanks and Missile Tanks from the Metroid series. HP is self-explanatory, while Hearts are actually the “ammo” you need to use your current sub-weapon. 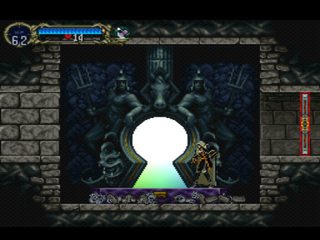 With the amount of backtracking required here, you might expect it to get tedious after a while. Thankfully, before the tedium has a chance to set in, you’ll likely unlock a teleport room in the castle that can transport you immediately to another unlocked teleport room. There are 5 of these in total, and they’re spread around the castle in such a way that you usually don’t have to travel too far to reach one. This was a really nice feature, and made backtracking to do additional exploration a breeze.

Where Castlevania distances itself from the Metroid series is with its RPG elements. These include gaining experience through defeating enemies and leveling up, and equipment, both of which will increase your stats. Your stats affect various things in the game, with standard RPG stats like Strength and Defense working as you’d expect. Luck is also present, and is a bit interesting in that having high Luck increases the chance of getting rare item drops from enemies.

Just like in other RPGs, finding new equipment that’s stronger than what you currently have, or that offers an additional buff, is a nice feeling. I also appreciated how the cloaks Alucard could equip all changed his appearance, changing the color of his actual cloak for his sprite. It’s a small touch, but definitely a nice one.

Countless monstrosities roam the halls of Dracula’s Castle, waiting for their chance to take you down. You’ll slash your way through all of them as you traverse the castle.

The enemy designs encompass several category of monstrous creations, from typical walking skeletons and living suits of armor, all the way to quadrupedal horrors with a woman’s torso for a tail.

Combat is satisfying for a few reasons. The fiery explosions that many enemies burst into when defeated are excellent, as well as the simple patterns they adhere to. Whether it’s a pattern their throwing axes follow, or the arc of an enemy jump, learning these simple patterns and figuring out how to dispatch an enemy most effectively feels great.

Among all these regular enemies are a number of bosses. With the exception of just one, all the bosses are unique designs. You won’t see a re-skin of an earlier boss for late-game boss battles. Even the boss that you fight twice doesn’t feel cheap, because it’s a cool battle and I’m really glad there was a rematch actually!

The bosses are all quite fair too. Some are much easier with the right sub-weapon, such as Holy Water, but even without that I found them all doable. There was only one that felt a little ridiculous simply due to the amount of health it had. That one was late in the game, and just felt like a sponge for Alucard’s attacks.

regular weapon attacks and sub-weapons, Alucard also has a number of spells at his disposal. These are cast by inputting a “fighting game” sort of combo with the D-pad before pressing the attack button, and cost some amount of MP to use. Luckily, Alucard’s MP regenerates over time automatically, so the combos for the spells are definitely worth learning. They’re satisfying to pull off too, and are a nice option in battle, especially against bosses.

All the spells are available from the start of the game too, but there’s a catch. The combos for the spells only show in your menu after you’ve either used that spell once, or purchased it from the in-game shop for a tidy sum of gold. This serves as a reward for experienced players, as they if you remember the combos you can access the spells right away and save the gold. Of course, these days nothing’s stopping you from looking up the spells online, which I did my playthrough for all but one spell.

Rounding off the combat is the final main feature, Familiars. Once you find one of the requisite items, you can have a Familiar follow you around at all times. Once you have the ability to summon a Familiar, there’s really no reason not do. They don’t cost MP or any other resource, and the only limitation is that you can only have one follow you at a time.

Your familiar will gain experience and level up independently of Alucard. You can’t view their stats or anything as far as I am aware, but I assume they become more powerful at higher levels.

There are five familiars in total, but I really only used two: the Faerie and the Sword. The Faerie will use potions from your inventory automatically when Alucard is low on health, which is a very nice thing to have for some boss battles. She can also detect breakable walls, allowing you to find secrets you might otherwise have missed. The Sword familiar attacks enemies by spinning and slicing. It’s weak compared to Alucard, but it is nice to have the extra attack sometimes.

The Sights and Sounds of Castle Dracula

The sprites and pixel art backgrounds here look really top notch. The areas of the castle look wonderfully haunting and worn, and they set the atmosphere perfectly. There are a number of memorable areas in the castle too, like the giant clock in the middle of the castle.

Music is done just as well as the visuals here. There are some great tracks, and since the music is specific to each area of the castle, backtracking through certain areas was particularly enjoyable because it meant I got to hear more of the excellent music.

On the other hand, there’s also voice acting in this game. It is rather infamous, as the combination of PS1-era digitized voices and the localization, or perhaps the writing or directing, just result in really cheesy sounding dialogue. It’s stiff and awkward, but there’s not much of it. And actually, I think it might fall in the “so bad it’s good” spectrum.

I have only a few small complaints about the experience.

There’s a certain boss in the game that you are more than able to reach without first getting a certain piece of equipment. So you enter this boss fight and expect it to play out like all the others before it. You’ll learn the enemy’s patterns and gradually deal enough damage until they’re defeated. Except this boss can only be damaged if you have a specific piece of equipment equipped. Without wearing that equipment, all of your attacks do 0 damage. You will be defeated rather quickly, without making a dent in the boss. Your only option is to either try again in vain, or explore more.

I used a guide at this point. Without the guide, I probably would have wandered aimlessly for a long time before finding where I needed to go in order to get the equipment I needed. The places you need to find could be discovered without a guide, but you’d really need to study your map for unexplored areas. That said, once you do get the required piece of equipment, the cutscene where you acquire does make it pretty obvious that you’ll have to use it in order to defeat the upcoming boss. That part is clear at least.

My other complaint comes chiefly from being accustomed to the Metroid side of metroidvanias. It’d be really nice if areas on the map that still housed collectibles were marked with an “O” as they are in the Metroid series. There was no way that I could find to determine if a collectible was still hidden in a room by looking at the map. The Faerie familiar will tel you when you’re near a breakable wall, and those usually hide secrets or a hidden upgrade, but you need to physically go to the room for this to happen, and be near the breakable wall in question.

That said, Castlevania: Symphony of the Night absolutely impressed me, and definitely held up to the hype I’ve heard about it. Besides from it just being a really great game, there are several nice things it includes that really make me want to replay it someday.

The first is that you can play through the entire game as Richter. You unlock this option after beating the game as Alucard. I imagine playing as Richter feels more like a classic Castlevania game. I’m really curious how some parts work, as I don’t expect Richter to have the same traversal abilities as Alucard. He probably can’t turn into a bat, for example!

There’s also a Time Attack menu showing how long it took you to clear certain checkpoints throughout the game. Many of these are the time it took for you to reach and defeat certain bosses. This is a cool feature to have built into the game, though I don’t know if it’s something I would really focus on myself.

Last but certainly not least, I loved the length of the game. It’s just long enough to feel like a proper “journey” and really give a sense of adventure and progression, but it doesn’t overstay its welcome. This gives the most points for replayability in my book!

As you might expect by this point, my final verdict on Castlevania: Symphony of the Night is extremely positive. If you’re like me, and have enjoyed the Metroid series for years, then I think there is a very good chance you would enjoy Symphony of the Night! It’s core gameplay is familiar, yet it feels different enough to feel refreshing and exciting in its own way, and the result is a remarkably enjoyable game!