SteamWorld Dig 2 is an indie metroidvania that released in 2017 for Switch, PS4, PS Vita, and PC, with ports in 2018 for 3DS and Xbox One. It’s pretty interesting to me that it came out on Switch first, and was ported to 3DS later, I guess it just released in that window of time when the Switch was out and the 3DS was still being supported. I played the first SteamWorld Dig on PC back in 2020, and it was a fun, short metroidvania romp. The sequel expands the scope in just about every way (but is still pretty short), and it’s even more fun than the first!

You play as a robot named Dorothy, who’s been promoted from her role as an NPC in the first game. She’s searching for Rusty, the protagonist of the first game, who’s gone missing since then. The familiar gameplay loop of the first game is here, you dig tunnels down into the mine, gather resources, explore caves, and eventually head back up to the surface to sell the resources you’ve collected. With the money you earn, you buy some upgrades for your gear, and then head back down into the mine to start the cycle again and dig deeper. As you explore the mine, you’ll also find new power ups, like the jackhammer and the pressure bombs, that in turn allow you to dig even deeper.

Those mechanics are all present in the first game too, but SteamWorld Dig 2 expands upon them by adding areas besides the mine to explore. You still primarily make your way downwards in these areas, but they feel distinct from the mine since you’re not digging down through them all the time, and instead they feature a bit of exploration alongside the digging. There’s also a moment towards the end of the game when you have 3 objectives to accomplish in whatever order you want, and each requires you to revisit an earlier area using your new abilities to reach parts of them that you couldn’t get to earlier. That segment was really cool, and definitely makes SteamWorld Dig 2 feel more like a metroidvania than its predecessor.

Several of the upgrades in this game are reused or slightly tweaked from the first game, like the Speed Boots and Drill (which is a Jackhammer instead here), but there are some notable additions. The Hook Shot was my personal favorite. It lets you shoot out a hook that will pull you into whatever surface it connects with, which was a very fun movement option and naturally allows you to reach places you couldn’t before. 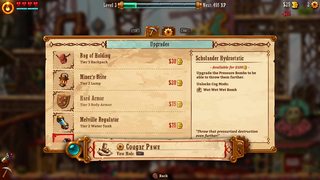 The soundtrack is just fantastic too. Several of the tracks have really cool bass lines, and they really get you in the groove to explore further. The track that plays in the main hub area has a great bass line too, but it starts far enough in that most of the time I wasn’t there long enough to hear it kick in. I mostly just focused on selling the spoils of my last mining venture, buying some upgrades, and getting back down to the mine as quickly as possible.

If you’re in the mood for a short metroidvania, SteamWorld Dig 2 is an easy recommendation from me. It takes the fun digging mechanic of its predecessor and adds more explorable areas and cool new power ups. It’s well worth playing if that sounds like a good time to you! My final time for this one was 5 hours 17 minutes.