Summer is nearly over, and Hackett’s Quarry summer camp just ended. The campers have been sent home, and the counselors are just finishing packing up. Before they go their separate ways, they decide to throw a party and spend one more night at Hackett’s Quarry. Their revelry is short-lived when they discover they’re being stalked through the woods by a pair of hunters covered in blood, and something more monstrous as well.

The Quarry is the next interactive drama horror game from Supermassive Games, and it released in 2022 for PS4, PS5, Xbox One, Xbox Series, and PC. It’s a spiritual successor to 2015’s Until Dawn from the same developer, and like that game, tells a very enjoyable campy teen horror story over its roughly 8 to 10 hour runtime. Its story has more depth than it initially appears, with some interesting twists and consequences based on your choices. For the unitiated, the gameplay in these games consists of short exploration segments, quick time events, and making choices during dialogue. In terms of gameplay, they’re similar to something like Telltale Games’ The Walking Dead series, but with a horror movie theme. 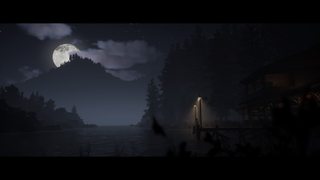 For my first playthrough, I played alongside my wife using Couch Co-op mode. This allows you to play with up to six players, and assign specific characters to each player. You still just pass a single controller between yourselves, but the game pauses and tells you which player to pass the controller to whenever control switches to a new character. I controlled all the male characters, while she controlled all the female ones. The male characters got the short end of the stick by being stuck with me, but we’ll cover that more later.

We’ve both played through and watched several previous games from Supermassive. Until Dawn is actually the first PS4 game we bought, and the reason we bought a PS4 in the first place. We watched a YouTuber play through it first, and enjoyed it so much we decided to buy a PS4 to play it ourselves. We haven’t actually played any of their Dark Pictures Anthology games, but we’ve watched playthroughs of both Man of Medan and Little Hope. I have Man of Medan in my Steam backlog, maybe we’ll play that one together someday, but as of this writing, Until Dawn is the only other Supermassive game we’ve played ourselves.

The Quarry has a similar structure to Until Dawn. The beginning is a little slow, but it really picks up a few chapters in. Between each chapter, you have a short scene with a creepy narrator, a fortune teller in this case. During the walking around gameplay segments, you can find tarot cards as you explore. If you found a tarot card in the previous chapter, the fortune teller will show you a premonition of a future event. These are very similar to the Death Totems from Until Dawn, and it was cool to see this feature return even if they’re still not particularly useful.

There are several branches and many possible deaths for some of the characters. To avoid spoiling anything, we won’t show the deaths here, but there are definitely more ways these characters can die compared to Until Dawn, and more deaths that can happen fairly early in the game. Of course, there are still some characters who are protected by plot armor until near the end. The Quarry has a story to tell, and it can’t really do that if everybody is dead by the third chapter, you know? Unfortunately, the game still has a few bugs related to some of these choices. I won’t go into detail to avoid spoilers, but during the Epilogue there’s a short text block detailing each character’s status at the end of your story. In one of the endings we got, it was straight up wrong for several characters. I can’t say more without spoiling things, but I couldn’t believe how innacurate that ending was, it was so bad it was funny.

One thing The Quarry has that Until Dawn didn’t is a Chapter Select option. After you’ve finished a playthrough, you can reset back to a previous chapter on that save file. So if you’re curious about a choice or want to try and save or kill a character, you can choose to replay from whatever chapter you want instead of having to start from the beginning again. There’s also the new Death Rewind feature, which unlocks after the you finish the game (or at the beginning if you purchased the Deluxe Edition or individual “Start with Death Rewind” DLC) and allows you to rewind when a character dies and redo the previous choice, but you can only use this 3 times during a playthrough.

Something we didn’t realize when we finished our first Couch Co-op playthrough is that you can’t use Death Rewind in Couch Co-op mode. Let’s just say I made a mistake on one of my characters near the end of our first playthrough, and some characters died because of it. So, that happened, and we finished the game afterward and unlocked the Death Rewind feature. We went back and replayed the last few chapters trying to keep everyone alive this time, but I kept making new mistakes and characters I controlled kept dying. We were really confused at first, because we had turned Death Rewind on, but we weren’t given the chance to rewind even though characters were dying. You also can’t use Chapter Select to restart from an earlier chapter until you finish the current playthrough, so I ended having to play several of the chapters many times since we weren’t having luck with Death Rewind. Eventually, I managed to avoid killing my characters, and we finished a playthrough on our Couch Co-op save file where everyone survived. By the end I think I had replayed some of the later chapters 6 times or something like that. It was only after I started another playthrough from the beginning in Single Player mode that we realized that Death Rewind just isn’t an option in Couch Co-op. We could have saved so much time if we had just started another Single Player save file from the beginning instead of using Chapter Select on our Couch Co-op Save had we realized Death Rewind wasn’t usable on it! But, whatever. I’m over it now, really I am. It’s fine.

In the beginning, we didn’t really care for any of these characters, except for Kaitlin, who was likeable the whole way through. She’s played by Brenda Song, of The Suite Life of Zack & Cody fame. Everyone else comes off as obnoxious at first, but once things get serious and they stop trying to impress each other, their real personalities shine through and most of them become more likeable. By the end of the game, we had grown to really like some of these characters, and Dylan became our other favorite character alongside Kaitlin. We never liked Jacob or Emma though, not at the beginning of the game, and not at the end.

Graphically, The Quarry looks really good. Until Dawn already looked great, and The Quarry builds on top of that and ends up looking even better. Characters look great, with excellent motion captured performances, and really natural looking animations including facial animation and lip syncing. There’s still a little jank here and there with shadows and lighting, but these are usually not too distracting. The one area the visuals look particularly off is with water. Whenever there’s a splash of water, it looks really unnatural compared to the rest of the world. Also, this game is really dark, like visually dark, and it can be really hard to see sometimes. Don’t be afraid to turn up the brightness a bit in the settings. We turned the brightness up about halfway through our playthrough and ran into a lot fewer walls afterward.

There’s also a Movie Mode option, where the game turns into a movie and requires no input from you. The quick time events will be completed automatically and button prompts don’t even appear, dialogue options are chosen automatically, and the parts where you would control the characters and walk around are removed too. Instead, it just jumps directly from scene to scene of the current character investigating clues in that area before advancing the plot. You can choose to have it either give you a story where all the characters live, one where they all die, or you can choose Director Mode, and customize the kinds of decisions each character will make. You can make them clumsy which I think causes them to miss more quick time events, flustered in “fight or flight” situations, and there’s a few other options as well. Movie Mode might sound silly on paper, but it was actually fun to watch. We tweaked a few character settings in Director Mode to try and have Jacob and Emma die, and our Movie Mode story ended with all the characters dying. Fun!

Between Until Dawn and The Quarry, I’m not sure which one is my favorite. They’re both great, and have pretty similar features and mechanics. The quick time events in Until Dawn are a bit more involved since they require you to make use of more buttons on your controller, but other than that the gameplay between the two is nearly identical. I don’t think I can pick a favorite between the two, I’d happily play either one again depending on what particular flavor of campy, teen horror I feel like experiencing. If you’ve enjoyed interactive horror movie games in the past, especially any of the ones Supermassive Games have made, I definitely recommend giving The Quarry a try!