Digimon Story Cyber Sleuth: Hacker’s Memory is the second game in Digimon Story Cyber Sleuth: Complete Edition. It shares a lot with its predecessor: it reuses many of the same locations, music, and digimon. A lot of the characters from the first game return in some capacity, with some supporting characters given a larger role this time around, but the plot mainly follows a new protagonist and main cast. I already explained the setting and battle system in my post about the first Cyber Sleuth game, so this time I’ll just focus on the new stuff, and my thoughts on Hacker’s Memory alone.

Hacker’s Memory is a side story that takes place at the same time as the first game. You control another player-named protagonist who joins a hacker group called Hudie after his EDEN account is stolen. There are several times where the plot will intersect with the original game, and put the new cast in the background of an event that happened in the first game. This usually didn’t flesh out the original story much if at all, but it was still fun to see the events from a different perspective. I do want to note, you need to have played the first game in order to understand the plot of Hacker’s Memory. The plot of the original game is occurring at the same time, and there are some significant events that affect these characters too, but those events aren’t explained much in this game, so if you haven’t played Cyber Sleuth you’ll be pretty confused at times. The story in this game was enjoyable, but the first major plot arc was extremely predictable. The other plot arcs mirror arcs from the original game too in a number of ways, so it can feel a little samey. But there were a few events that shook things up in ways I wasn’t expecting, and I was always interested in how things would turn out for the characters.

One of the few new gameplay elements introduced in Hacker’s Memory are Domination Battles. These were pretty interesting, and featured a great new music track too. Domination Battles take the turn-based battle system and add a strategy RPG layer on top of it. In these, you’ll control several characters, one of which is always the protagonist, and each of them has their own party of up to 3 Digimon. The battlefield is a grid, and on a character’s turn, you can move them up to 2 spaces, but moving to a higher elevation costs 2 movement, so you can only move to higher ground if you’re right next to it at the start of your turn. The goal is to reach a certain number of points by capturing hacking areas. You capture an area by simply moving onto it, but the enemy can recapture it if you leave it undefended. If you move onto the same square as an enemy team, a battle will start. These are similar to normal turn-based battles, but with a few key differences.

The first major difference is that each Digimon only gets one action in the battle, instead of battling until a team is defeated. Also, the party who triggered the battle gets to go first, regardless of Digimon speed, so there’s incentive to being the aggresor. Once all Digimon have performed an action, the battle ends. If you defeated all the enemy Digimon, then that character disappears and won’t respawn until their next turn, and you take over the space they were occupying. If you didn’t defeat the enemy team, then you return to the space you were on before you moved that turn. 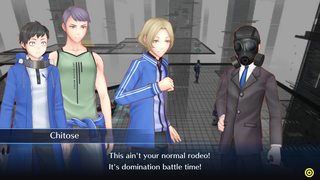 Domination Battles play out like this until a team reaches the required amount of points to win. It’s sort of like a tug-of-war, king-of-the-hill situation. Although, sometimes the AI prioritizes attacking your teams instead of preventing themselves from losing. There was one time when they attacked one of my other teams instead of going for one of the hacking areas I controlled, which caused them to lose on the following turn when I took over one of their hacking areas. I enjoyed Domination Battles, they were a nice change of pace from time to time. There was usually only 1 per chapter, but I think several chapters didn’t have any Domination Battles. The way you have characters on a grid who control parties of 3 Digimon reminds me of Shin Megami Tensei: Devil Survivor a lot, which isn’t a bad thing!

Hacker’s Memory also featured new Digimon, or at least Digimon I hadn’t seen in the previous game. There was enough variety in Digimon I encountered in the early game that my party consisted of Digimon I hadn’t had in my party during my playthrough of the first game, which was pretty cool. At some point, I started to see Digimon I’d encountered before, but I tried to use Digimon in my party that were new to me most of the time. Raising Digimon works the same way it did in the first game, and I enjoyed it just as much here as I did the first time around.

Despite spending quite a bit of time running around the same locations I’d explored in the first game, Hacker’s Memory still managed to hold my attention. Just like it’s predecessor, it has a lot of charm. I don’t think it’s as good as the first game by any means, but if you enjoyed the first Cyber Sleuth game and you’re looking for more, Hacker’s Memory is an easy recommendation. My final time was 32 hours 58 minutes, making my final time for both games in the Complete Edition 70 hours 26 minutes.

I finished Murder by Numbers this week. Continue reading