In the beginning, you choose whether to play as a male or female character, who you then name. Your character is a high school student living in present day Tokyo. Like pretty much everyone else, your character enjoys using EDEN, a virtual reality version of the Internet, that users physically enter and explore. One day, you receive an invitation from a hacker promising you a gift, and you decide to meet up with them in EDEN. The hacker does give you a gift, giving you the Digimon Capture program, but they also lock you in EDEN. While searching for a way out, you meet another hacker, who teaches you to use the Digimon Capture program. Shortly thereafter, you choose your starting Digimon and become an assistant detective at a detective agency specializing in cyber crimes, and from then on out, you’ll be battling against both wild Digimon and the Digimon teams of other hackers as you explore cyberspace!

The battle system is pretty simple. It’s turn-based with random encounters as you explore the game’s dungeons, and has two main elements to keep in mind: Digimon Types, and Attributes. A Digimon is one of 4 types: Vaccine, Virus, Data, or Free. Vaccine, Virus, and Data have a rock-paper-scissors relationship with each other. A Vaccine Digimon will deal double damage when attacking a Virus Digimon, Virus is good against Data, and Data is good against Vaccine. On the other hand, a Virus Digimon attacking a Vaccine Digimon will deal half damage. The fourth Type, Free, is outside this triangle, and just takes and deals regular Type damage regardless of the target’s Type.

Additionally, there are also 9 Attributes that can be exploited to further increase the damage of an attack: the first three, Water, Fire, and Plant, have a similar rock-paper-scissors relationship. For example, if you use a Water type attack against a Fire type Digimon, you’ll deal 1.5x the normal damage. This stacks on top of the Type damage multiplier too, so a Vaccine Type Digimon using a Water attack against a Fire Type Virus Digimon will deal 3 times damage total! Earth, Electric, and Wind form another Attribute triangle that works the same way, and then rounding out the Attributes are Light and Dark, which deal 1.5x damage against each other, and the final attribute is Neutral, which doesn’t provide any extra damage and will always deal the regular amount. 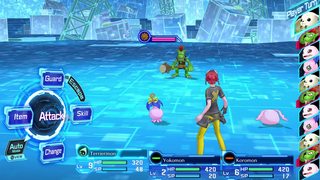 These 2 systems are easy enough to get the hang of, and even if it takes you a little while to memorize the effectiveness of Types and Attributes, it’s not like attacks dealing 3.0x damage against you will knock out your Digimon in one hit. At least, not on Normal difficulty most of the time. Not that you can ignore the effectiveness of the attacks completely. If all you ever did was try and defeat your enemies by dealing 0.5x damage while they were hitting you back for 2.0x damage or more, you probably wouldn’t be able to make it through the game, or if you did it would be a very frustrating experience. Once you get the Types and Attributes memorized though, battles are a breeze on Normal difficulty.

I don’t think my Digimon were overpowered, but beginning from a pretty early point in the game, they were able to steamroll through random encounters and even boss battles without any difficulty. For those wanting more of a challenge, there is a Hard difficulty available that can be turned on and off at any time. I only tried it once, and while it didn’t make random encounters much more difficult, when I tried fighting a late game boss on Hard, it was defeating my entire party with a single attack, and that’s the only time in the entire game that I got a Game Over. I didn’t mind the easy battles on Normal difficulty though, because it allowed me to focus more on one of my favorite parts of this game, raising Digimon! 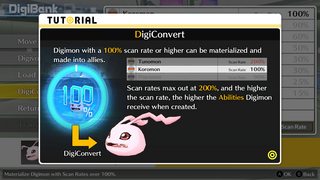 After your Digimon level up and gain enough stats, they’ll be eligible to Digivolve into a new form. During this process, you’ll have potentially several options for what you want them to Digivolve into, provided they meet the level and stat requirements. When a Digimon Digivolves, they go back to level 1, but with increased base stats, and you start leveling them up all over again! You can also De-digivolve a Digimon into a weaker form, which will increase their Ability (ABI) stat, which has some other benefits that I never really understood but is mostly for unlocking later Digivolutions that require a certain ABI threshold. I loved seeing all the Digimon designs in this game. The base game featured 249 Digimon, and Complete Edition also includes the 92 Digimon added in Hacker’s Memory, bringing the total up to 341. I tried Digivolving as many as I could as I played through the story, and while I ended up collecting a total of 188, there are still a lot of Digimon I never even saw! Digimon has drawn a lot of comparison to Pokémon over its lifetime, but the general flow of raising Digimon and then Digivolving them reminded me more of the MegaTen series than Pokémon. Like when fusing demons together in MegaTen, when your Digimon Digivolves into a new form, it may look completely different, and it was always exciting when I didn’t know what Digimon was going to appear on the other side!

Another of my favorite parts of this game was the story. I’ve never gotten into any Digimon media before this, outside of maybe seeing an episode of the first Digimon anime or seeing commercials for it when I was in elementary school, so I don’t know if all the Digimon stories are like this one or if Cyber Sleuth is an outlier. But I was pleasantly surprised by the direction the story took, and there were several plot twists that I didn’t see coming. A few of the twists were easy to see coming and were foreshadowed pretty heavily, but others definitely took me by surprise! To avoid spoiling anything, I won’t say more about the main story. I really enjoyed it though!

Cyber Sleuth has a really good soundtrack too. Before I ever even played the game, I’d found a few tracks from its OST on YouTube, and I really enjoyed those, so finding out that the rest of the OST had more great tracks I hadn’t heard before was a nice bonus!

I don’t remember if I remembered it first or if my wife did, but shortly after I started playing Cyber Sleuth, one of us remembered part of the theme song to the original Digimon anime, so we started randomly singing that around the house, and whenever I would boot up the game too. It was simple, silly fun, and that’s an aspect of this playthrough that I’ll probably remember fondly for a long time. I’ll probably have the song stuck in my head for a long time too!

I enjoyed Digimon Story: Cyber Sleuth a lot. It was a very relaxing RPG to play. It’s not challenging, but it has a lot of charm, and raising Digimon was a lot of fun. If you’re a fan of monster raising RPGs, it’s probably right up your alley! My final time for this one was 37 hours 4 minutes. Like I mentioned earlier, this game is one of two games in the Digimon Story Cyber Sleuth: Complete Edition collection. I might take a short break from Digimon before diving into the other game, Hacker’s Memory, but I’m definitely looking forward to giving that game a try soon!