Released in 2020, Going Under is the first game from indie developer Aggro Crab, and it’s an interesting blend of roguelike, dungeon-crawler, and beat ‘em up, topped with a heavy dose of sattire.

You play as Jacqueline, a new marketing intern at a beverage startup called Fizzle. On her very first day, Jacqueline finds out that this internship isn’t exactly what she signed up for when the Project Manager, Marv, tasks her with killing a rogue goblin that has wandered up from the office basement. Her internship quickly turns out to be less about marketing and more about murdering when Marv tells her they need her to delve into the basement and take care of all the monsters downstairs instead of doing the marketing things she went to school for. That’s the start of Jackie’s dungeon-crawling adventure, but it’s just the beginning of the story, which manages to poke fun of many aspects of modern startup culture. I particularly enjoyed the interactions between the CEO, Project Manager, and Lead Software Engineer, because as a Software Engineer myself, they were just all too relatable.

As a roguelike, the gameplay consists of attempting runs of the several dungeons in the game, each time starting with nothing and collecting both weapons and skills as you make your way through the dungeon. The dungeon floors are randomly generated collections of several rooms, each of them filled with office supplies you can use as weapons, and monsters who can’t wait to attack you. Combat quickly gets hectic when multiple enemies are involved. You’ll have to use your dodge roll to dodge their attacks while at the same time making sure you always have a weapon on hand to fight back. Weapons break after enough uses, and the doors to the room lock if there are monsters in it, so keeping an eye on what you can use as a weapon in the current room is always a good idea. You can hit enemies with keyboards or pencils, shoot staples at them from a distance, or throw office chairs at them. There are a lot of options, and it was always pretty amusing seeing what sorts of weapons would appear next when exploring a new dungeon.

Most of the dungeons have 4 floors - 3 normal floors, and then the boss floor. It doesn’t take too long to make it through a dungeon either, they’re only about 15 to 20 minutes long on average if you make it all the way through. If you manage to make it to the boss floor, there’s one last store where you can spend whatever money you’ve scrounged up to buy healing items or whatever else you can afford. There were a lot of runs where I made it to the boss floor without much health, and I didn’t always have money to afford healing. Facing the dungeon boss at low health usually didn’t go well for me, but sometimes that’s your only option, and you just need to make the best of it! The bosses are pretty challenging until you get a feel for their attacks, and even then, whether you win or lose may come down to which skill drops you were able to get on your way down. Chances are, you’ll be dying during a lot of your attempts, either to the boss or on one of the earlier floors. Whether you win or lose, you’ll be given a quick summary of your run, and then kicked back upstairs to prepare for your next run!

Permanent progression to make your future runs a little easier is done a few different ways. The most obviously helpful one comes from defeating some dungeon bosses for the first time. When you do that, your maximum HP increases permanently, which is a huge help. Also, whether you win or lose, whenever you finish a run you gain progress towards endorsing each of the skills you have. Once the meter for a given skill reaches 100%, it becomes endorsed, which means you’ll be able to start a run with that skill already equipped if you choose it. However, you’re only able to start a run with 1 skill equipped. I don’t think there’s a way to ever start with more than 1, unless that’s just something I never unlocked. 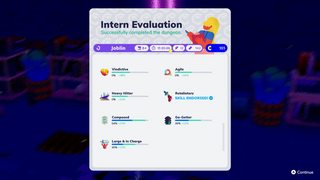 You also gain a currency called Cubits when your run ends. These can be used to buy new skills. Once you buy a skill, it has a chance to appear in the dungeons wherever you find skills, whether it’s from a reward box for clearing a room, or for sale in a shop.

The last form of permanent progression involves the game’s main form of side quests, tasks. Your co-workers will give you tasks to complete, and these are side quests you can pursue during your runs through the dungeons. Some are specific to a particular dungeon, so if you’re already past that point in the story you may need to go back to a previous dungeon if you want to complete the task. Once you complete a task for someone, they become available to equip as a mentor, and each person offers different benefits. For instance, having Ray as a mentor lets you buy things you can’t afford, and if your money falls into the negative you end up shackled with debt. Literally, a ball and chain gets shackled to your ankle and stays there until you collect enough money to get out of debt. That’s a prime example of the kind of humor you’ll find in this game, and I have to admit it was pretty amusing. My favorite mentor ability by far was Swomp’s. With Swomp as your mentor, he’ll shoplift a random item for you from each shop you find in the dungeon. This easily saved several runs for me, as each shop generally has about 3 healing items out of 6 total, so he usually has a 50/50 chance of getting you some healing for free. 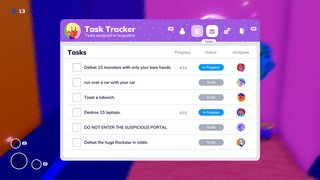 Your co-workers have many more tasks for you after you complete their first task and unlock them as a mentor, and you can increase their mentor level by completing several more tasks to gain even more benefits from them, up to a maximum level of 4. Although, the highest level I got any of the mentors during my playthrough was 3, and that happened very late in the game. Most of the time, I just wasn’t that interested in going back to previous dungeons to complete their tasks, so I kept focusing on the main story and the current dungeon instead. 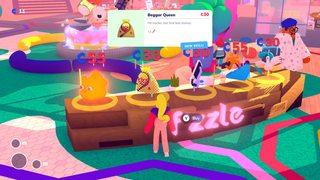 In addition to its satire and sense of humor, I also thought the art style of Going Under was incredibly charming. The colors are bright and vibrant, and I like the minimalist look of the 3D character models too. They’re all made of pretty simple shapes, and it works well with the color palette. The music is also really good. You’ll be hearing the various themes a lot as you go between the office and the dungeons, but I never got tired of hearing them.

The only negative thing about this game is that it can feel frustratingly difficult at times. I’m fairly new to roguelikes, and I know that losing runs is part of the process, but some of the runs I lost early on in a dungeon just felt frustrating. Whether it’s because I got bad skill drops that run or just got stuck on a particular enemy and ended up taking a lot of damage, sometimes it felt like I was really hitting the wall. But the good news is, I eventually made it past these obstacles! The frustrating runs were a lot less frequent than the fun ones, and even most of the runs that I lost ended up being fun. Most of the frustration came later in the game, when I had a lot of skills endorsed but could only pick one to take with me. In that way, the progression does feel a little limited.

Overall, Going Under is a great indie game. Most of the time, it’s a lot of fun! Even now after finishing the game, I think I might go back and do another run or two on ocassion, maybe try to complete some additional side quests. If the game sounds appealing to you, I’d definitely recommend giving it a try. My final time for this one was 9 hours 35 minutes.