Supergiant Games made a name for themselves throughout the 2010s, releasing one critically acclaimed game after another: Bastion in 2011, Transistor in 2014, and Pyre in 2017. They would cap off their first decade in business with 1 more game. Beginning with an Early Access release in December 2018, this game would see a full release in 2020, and go on to garner just as much acclaim as its predecessors. That game was Hades.

Hades is a rogue-like action RPG where you play as Zagreus, son of Hades, as he tries to escape his father’s realm in order to join his relatives on Mount Olympus. As a rogue-like, when you lose, you start over, and multiple runs are expected. Unless you’re some sort of prodigy, you won’t be escaping Hades on your first try! Instead, you’ll probably die, and find yourself emerging from the Pool of Styx in the House of Hades for the first of many times.

During the escape attempts, you’ll hack and slash your way through randomized chambers filled with waves of enemies, get a reward for clearing the room, and then the doors unlock and you move on to repeat the cycle. Combat is often very fast-paced, and sometimes I felt like I was just mashing buttons and trying to survive. It’s a ton of fun, and part of what makes it so fun and replayable is that there’s a lot of room to experiment with character builds.

You start each run with just your weapon, which has a regular and special attack, and your cast, which lets you throw a ranged projectile attack. One of the possible reward types for clearing a chamber is a boon from one of the gods on Olympus. When you get a god’s boon, you’re given 3 upgrade options and have to decide which one to take. Some power up your weapon attacks or cast and add special effects, while others are passive upgrades, like reducing the damage you take, or allowing you to deflect attacks with your dash. As you make more escape attempts, you’ll get a feel for what sorts of abilities each god offers, and probably end up with your personal favorite. I liked Athena, Ares, and Artemis the best, Athena for abilities that let you deflect attacks, Ares for dealing a lot of damage, and Artemis for getting critical hits.

After clearing several chambers, you’ll reach a mini-boss chamber where one of several possible mini-bosses awaits you. This keeps runs interesting since you’re not always facing the same mini-boss. Once you’re through them, you’ll have a few more chambers to prepare, and then you face the final boss of the region. For the game’s first region, Tartarus, this boss is Megaera, one of the Furies. Hades was fun from the very beginning of my first run, but coming up against Megaera for the first time took it to a whole new level. There’s two main reasons for this: these fights are a nice challenge until you learn their patterns, and the boss fight music is fantastic.

If you’re anything like me, Megaera will wipe the floor with you the first few times you fight her, killing you and sending you on an express trip back to the House of Hades. But rather than being discouraging, I found the trips back a nice chance to unwind a bit from the tension of fighting my way through the underworld.

When you return to the House of Hades after each death, there are always several characters to talk to, and they’ll have new things to say each time depending on how much progress you’ve made overall. Nyx and Achilles will often have encouraging words for you, while Hades and Megaera will be condescending and derisive of your attempts at escape. This is also where you’ll learn more about the main story, gaining insight into exactly why Zagreus is trying to escape, and learning more about the relationships between the residents of the House of Hades. Meeting these characters and learning a little about them and how they fit into the overall narrative was fun, so I never really minded failing a run. There’s also a huge amount of dialogue, and it’s all voice acted. At some point the characters must run out of new things to say, but I don’t think I got anywhere close to that in all the time I played. 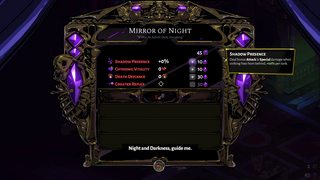 Most importantly, the House of Hades is where you can spend the resources gained during your runs to make yourself permanently stronger, giving you an edge during your next run that might make the difference between success and failure, and allow you to get farther than before. These upgrades range from something as simple as extra base HP, having an extra dodge available, dealing extra damage when attacking enemies from behind, and a whole assortment of other upgrades. You unlock more potential powers as you progress too. The most useful of these in my experience is Death Defiance, which allows you to revive with some percentage of your health restored when when your HP hits 0 so you can keep fighting. When it’s fully upgraded, you’ll have 3 uses of Death Defiance in each run, and these were easily the most helpful upgrade.

In the past, I’ve found it hard to stick with rogue-likes to the end. I’m generally interested in the gameplay, but not interested enough to play all the way to the end of a run. Hades is the first rogue-like I played all the way through to the end, and a big part of that is how it weaves a compelling narrative together with the rogue-like gameplay. It’s that strong connection tying the two elements of the game together that makes it work so well. My final time was 24 hours 29 minutes when the credits rolled. I even played a little more after finishing the main story, something I rarely do with most games, and from reading the Hades wiki a bit, there’s I could play this game so much more and still be finding new things in it. Hades is an incredible feat of game design and storytelling, and if the premise is at all interesting to you, I can’t recommend it enough!