This past week, after playing on and off for about a month, I finished Shadow Hearts, a PlayStation 2 RPG. It’s pretty similar to other RPGs of its time with a few notable exceptions that help it stand out: the Judgement Ring system, and the setting. It’s set in 1913 Asia and Europe, with supernatural elements frequently popping up in its world. And it starts with a real bang too, there’s several opening FMV cutscenes right at the beginning that really get you pumped to see what the game is all about.

Once the opening cutscenes are through, the game does what most RPGs do, and starts out a little slow. The gameplay is pretty basic for a while, though the Judgement Ring spices things up a bit. While the main plot takes a while to get moving, I found the situations the characters find themselves in during the early game pretty interesting. It sort of takes the traditional “move from town to town” RPG mechanic and gives it a neat spin by having those towns be haunted by spirits and supernatural beings, and it’s up to your party to exorcise those spirits through battle!

The Judgement Ring mechanic I’ve mentioned plays a large role in the turn-based battles. Whenever you take any action in battle, whether it’s a regular attack, or using a special ability or item, the action’s success is primarily based on executing the Judgement Ring hits correctly. When you initiate an action in battle, the Judgement Ring pops up, and some highlighted areas appear. You need to press the button when the indicator is over each of those areas as it spins around the Judgement Ring. It only makes only loop around too, so you have to press the button as soon as the indicator is over the highlighted area. If you miss, your attack will either be cut short or stopped entirely. 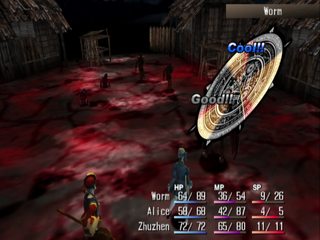 Additionally, many actions can be powered up by pressing the button when the indicator is over the red highlighted areas, but hitting those is more risky since they’re always right at the end of the target areas. If your timing is just a little bit late, you’ll miss the target area and your attack will be cancelled altogether! I enjoyed this system. It adds a nice element of skill to the turn-based battles, and trying for more powerful attacks by hitting the red areas of the Judgement Ring is a nice risk vs. reward mechanic. 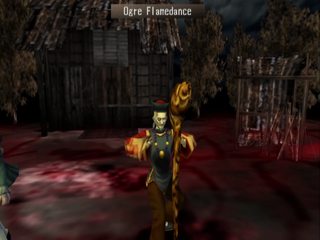 As cool as the Judgement Ring is though, battles can get a little stale. For most of the game, I didn’t have to use abilities on most enemies. Regular attacks will get you through most of the game’s enemies just fine. It can feel repetitive after awhile. Battle animations are also not skippable. Regular attacks are fast enough that I didn’t mind them, but after seeing the animation for the healing spell enough times, I really wished I could press a button to skip it. That’s just a product of the times though, I don’t think many games from this era of RPGs had an option to skip or speed up animations.

The story here is pretty good. I think a big part of that is that you just don’t see many RPGs set in the early 20th century. But the plot is also interesting in its own right too, I was drawn in by wanting to see what would happen to these characters next, and where their adventures would take them. The main character, Yuri, can transform into monsters by absorbing the souls of monsters he’s defeated in the past. This ties into both the gameplay and even the plot a bit, as he’ll be able to transform into more kinds of monsters in battle as the game progresses, and he also struggles with the emotional and mental burden of his ability. Your party grows to eventually include more characters too, but Yuri was the most interesting to me for the majority of the game.

One last thing I want to mention, Shadow Hearts has more in common with PS1 games than PS2 games in some ways. The thing that stood out to me the most is its use of pre-rendered backgrounds and fixed camera angles. This is the same kind of thing the PS1 Final Fantasy games do, and I love it! It’s just a really cool visual style in my opinion, and it even ties into the gameplay a bit by using the fixed camera angles to hide optional treasure chests in hard-to-see places. I think it’s great, but your experience with it may vary depending on how you feel about the pre-rendered background era of 3D games.

Shadow Hearts was a fun game. It’s not too challenging most of the time. I think most of my Game Overs came from the first act of the game. After that, battles felt easy most of the time, and it was the story carrying things forward. This is the first game in the trilogy of PS2 games, so I’m interested to (someday) see how the next game in the series adjusts the formula. My final time for this one was 20:54.