So, this is a game I picked up pretty much out of nowhere. I think I probably heard about it on the Metroidvania subreddit at least once, but that’s about it. It’s on Steam, but I played it through PC Game Pass - I’ll talk about that more in a future post, but for now, let me tell you about Touhou Luna Nights. 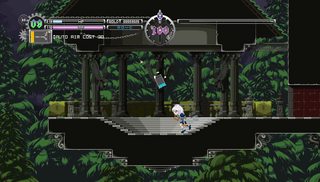 There’s a Japanese side-scrolling shoot ‘em up/bullet hell series called Touhou Project, developed by the one-man developer Team Shanghai Alice since 1997. It spans 18 main titles and several spin-offs, including spin-offs in other genres. This game, Touhou Luna Nights, is a Touhou Project fangame, developed by Team Ladybug. Presumably, they’re fans of the series, and enjoyed it and its characters so much that they decided to create their own game featuring some of its mechanics and characters. The creator of the original Touhou Project series, ZUN, is very permissive of this sort of thing, so there are numerous fan works like this. I didn’t know any of this until after I finished the game and looked it up, but you don’t really need to know any of it to enjoy the game.

You play as Sakuya, a maid with the power to stop time. She falls solidly into the “super-capable ninja maid” anime trope, and you’ll spend most of the game running through around, throwing knives at enemies. Lots, and lots of knives.

The highlight of the game is definitely the time stopping mechanic. You can only stop time for a while before it forcibly resumes, and the timer ticks down faster whenever you move. Since time is stopped, when you attack while using your power, you’ll leave knives suspended in mid-air. You can lay down several groups of knives around an enemy with time stopped, move to somewhere safe, and then resume time and watch all the knives obliterate them. It’s really cool, this is something that I haven’t seen in another metroidvanias, and it’s a really fun gimmick!

Your time stopping powers also extend to the platforming as it becomes more involved, especially in one of the later areas of the game, the Clock Tower. Here, all the time stopping challenges that have been introduced so far come together. Objects that continue moving even when you’ve stopped time, things that only move when time is stopped, and things that move in reverse when time is stopped. These effects are applied to both hazardous objects and platforms, and the combinations force you to stop and resume time frequently in order to make it through.

This is a good time to mention that Luna Nights is mostly based on the characters and setting of the Touhou Project game “The Embodiment of Scarlet Devil,” released in 2002. I’m not sure if that game has as much of it, but Luna Nights has a ton of Castlevania influence. The Clock Tower area I just mentioned is obviously inspired by the Clock Towers often found in Castlevania games, and it’s even filled with turning gears, plenty of spikes, and other hazards. There’s no Medusa Head enemies flying around though, which is fine by me!

The time manipulation mechanic is also worked into the boss fights very nicely. There are several bosses in the game, and many of them have attacks that would be hard to dodge without stopping time. Even being able to stop time, the boss fights are pretty tough at first. I got several Game Overs trying to defeat them, and I was only able to get past them after learning their attacks a little better and figuring out which of my own special attacks would deal the most damage.

Luna Nights was a very short game, my final time was only 3:37 according to the Xbox app. It’s a very focused experience, and makes the most of its unique gameplay mechanics in its short runtime. There’s some minimal required backtracking, I mean, this is a metroidvania after all, with additional optional backtracking if you want to get some extra upgrades, but it never wastes your time. I’d definitely recommend it to fans of the genre, it’s just so much fun the whole way through!