This post is spoiler-free, so read on without fear!

In Guacamelee, you play as Juan, a simple agave farmer. But his simple life comes to an end when the ruler of the underworld, Carlos Calaca, kidnaps Juan’s childhood friend and love interest, El Presidente’s daughter, and kills Juan when tries to intervene. After waking up in the Land of Dead, Juan stumbles upon a mystical mask. The guardian spirit of the mask, Tostada, appears and tells Juan the mask only appears to chosen individuals, and that wearing it will allow him to return to the Land of the Living. Donning the mask, Juan transforms into the Luchador, and he’s ready to kick some skeleton tail!

As the title of the game might have lead on, Guacamelee is pretty tongue-in-cheek. It doesn’t take itself seriously, full of puns, jokes, and all-around silly dialogue. I mean, there’s a character named Tostada, that tells you all you need to know really. There are also several references to other games and media. The biggest ones are the Choozo Statues, obvious references to the Chozo Statues from the Metroid series. Like in Metroid, finding these statues means you’re about to unlock a new ability, which there are quite a few of in Guacamelee, but we’ll get to that. It’s a fun reference, and finding one of the Choozo Statues always made me smile.

The gameplay is a pretty even mix of platforming and combat segments. The platforming is pretty standard for a while, but once you get the ability to switch between the Land of the Living and the Dead at will, it gets a lot more interesting. Certain walls and platforms only exist in one world, and there are times you’ll need to flip back and forth quickly to navigate the obstacles in your way!

Similarly, combat is pretty basic in the beginning. Once you hit an enemy a few times, you can grab and throw them, and other than that you’ll be mashing the attack button for 3-hit combos a lot in the early game. But before too long, you gain directional special attacks, and not too much longer after that, enemies start getting colored shields, and you need to hit them with the special attack that matches that color in order to break it, otherwise they’re immune to all damage. These elements spiced up the platforming and combat in really nice ways, and made the middle of the game a blast to play through, all the while listening to a really cool soundtrack.

I really only have a few complaints about Guacamelee. There are points when you’ll have to fight a few waves of enemies in order to advance, and this was a little irritating sometimes, especially towards the end when there some annoying enemies in some of the waves. The first part of the final boss fight was pretty annoying too. They have the shield I mentioned earlier, but it changes every time they attack, and all their attacks involve appearing out of nowhere, launching the attack, and then vanishing again. So defeating them is a matter of seeing what color their shield is, and reacting in time to hit them, while also dodging their attacks. I died a lot, and I really didn’t enjoy that fight!

My last complaint is the true ending unlock requirement. You have to complete some optional challenges, which I didn’t even find until after beating the final boss the first time and getting the “bad” ending. Prior to attempting the first challenge I found, I was mildly interested in seeing the rest of what Guacamelee had to offer. But that interest was quickly snuffed out as I failed time after time trying to do this platforming challenge. It’s basically a vertical climb with a lot of precise platforming, and it wouldn’t be so bad if it weren’t so easy to fall and have to redo a lot of stuff. After a certain number of falls, I threw in the towel.

Outside of those complaints, I enjoyed Guacamelee, it’s a good game with a ton of character. My final time was 4:23. 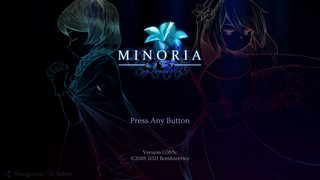 I was still craving more metroidvania action, so the next game I played was Minoria. This is from the developer of the Momodora series, and it’s billed as a “spiritual sequel.” I enjoyed Momodora: Reverie Under the Moonlight when I played it last year, so I was looking forward to something similar here. Minoria is definitely similar, which is nice, but it does a few notable things differently!

Graphically, Minoria is significantly different from the pixel art of Momodora. Character models are 3D now, but while the environment and backgrounds are still 2D, they’re more like digital paintings than pixel art now. I think it all looks pretty good though, the lighting especially makes the backgrounds pop from time to time.

You play as Sister Semilla, a nun who’s really good with a sword. She and Sister Fran have been sent to rescue the princess from some witches, but by the time they get to the witches’ hideout, all the other nuns who were sent on the same misson are already dead. Fran can’t fight, so it’s up to Semilla to defeat the witch menace alone.

Combat is one way in which Minoria differs from its predecessor. You have a dodge roll that is very important to combat, as well as the ability to block or parry enemy attacks with well-timed button presses. It took me a while to get the hang of it, but once I got the timing down, combat feels really fluid. Parrying an enemy attack is always super satisfying too! Something that took some getting used to is how much damage you take from enemies. Every enemy in this game hits hard when you first encounter them, making dodging attacks critical to survival. There’s a mechanic where you take extra damage if you’re hit during one of your own attacks, and this applies to enemies as well, but this may have played a part in how much damage I was taking from enemies in the early game, since I was mashing the attack button most of the time.

Beyond that, the gameplay of Minoria is pretty standard metroidvania fare. You explore, fights bosses, level up, and gain the ocassional new ability. There were only 2 new movement abilities in the entire game, but it’s such a short experience so that felt like enough new powers. Progession was usually tied to finding new keys instead of new abilities, and it’s pretty common to find a locked door that you can’t pass until later in the game. Bosses were pretty fun. Like other enemies, they hit hard, and I often found myself low on health after getting hit once. Luckily you have the Healing Incense at your disposal, which you can use several times before it runs out of uses and needs to be recharged at a save point, and that was enough to help me survive boss battles after just a few failed attempts.

If you’re in the mood for a short metroidvania with some mildly challenging moments, I’d definitely recommend Minoria. It was created by a pretty small team, and Minoria is an impressive accomplishment given how few people were involved! My final time was roughly 4:20, it’s hard to say for sure since I don’t think the playtime on your save file updates when you clear the game.