Spoiler warning for Lufia II, I spoil some late game bosses. I don’t spoil the ending though.

The section on Bloodstained is spoiler-free.

I finished Lufia II this week! Towards the end of the game, there were a lot fewer puzzles in the last few dungeons. The story is really going places at that point, so I think fewer puzzles in the dungeons helped keep the pace consistent. The final chunk of the game was sort of like a boss rush mode, where you fought some bosses from earlier in the game again. By this point, you’ve gotten really strong equipment on the main character as part of the story, so it was easy to steamroll through them. Dealing over 1000 damage in 1 hit against these huge bosses was pretty awesome!

This is as good a time as any to bring up some of Lufia II’s bugs. Most of the bugs in the game are pretty harmless, things like text being garbled in the equipment screen when you switch characters. It’s a little annoying, but it’s harmless. But then the main story takes you to an area that suffers from horrible graphical corruptions in the North American release of the game. Apparently, it’s really just the North American version of the game with this bug. The collision in the area still works, and all the cutscenes play out as normal, but you basically have to navigate around this glitchy area in the dark in order to progress the story. I stumbled around blindly for a while before looking up a map to figure out how to get where I needed to in the area. Luckily, it’s a very short section of the game, but definitely an unfortunate bug.

Other than that, Lufia II was a really good RPG. Some of the puzzles were by far the hardest part, battles and bosses were usually easy in the main story. I’m assuming there’s some challenging optional bosses and/or dungeons here, because that’s usually a thing with RPGs, but I didn’t look for them. My final time for this one was 22:09.

Bloodstained: Ritual of the Night (PC)

The next game I played this week was Bloodstained: Ritual of the Night. This game is a Castlevania game in everything but name. Seriously, it was produced by Koji “IGA” Igarashi, who used to work at Konami and worked on several Castlevania games that helped define the metroidvania genre, including Castlevania: Symphony of the Night. IGA left Konami in 2014, and founded his own development studio, ArtPlay. In 2015, he launched a KickStarter campaign for Bloodstained with the goal of creating a spiritual successor to Symphony of the Night. It quickly became one of the most successful video game KickStarters ever, raising over 11 times its original goal. Of course, raising lots of money and aiming to follow in Symphony of the Night’s footsteps are admirable goals, but it doesn’t mean much if the team doesn’t deliver on those promises. Well, I’m happy to say that they very much delivered!

If you’ve played any of the Castlevania games IGA worked on, Bloodstained will instantly feel familiar. The gameplay and setting are very, very Castlevania, and there are numerous nods to the Castlevania franchise. There’s a library in the game run by a vampire who is clearly based on Alucard from Symphony of the Night, and they even got Alucard’s English voice actor, Robert Belgrade, to voice him. And the room he’s in is a direct clone of the shop room from Symphony of the Night! For a fan of the series, little nods and references like this are wonderful.

The similarities to Castlevania continue with Bloodstained’s Shard system. This is basically the same system as the Soul system from Aria of Sorrow, or the similar systems from the Castlevania games that followed, where enemies have a chance to drop their Shard when defeated. These Shards can be equipped to gain new attacks, passive buffs, or even familiars. I really enjoy the familiars, it’s nice having a companion following you around, helping out in small ways, dealing a little extra damage to enemies and bosses. All the Shards that give you new attacks are cool too of course, but (as usual in these games) there are so many, I usually just find one that I like and stick with it for a long time. It’s cool to have so many options though, there’s definitely a massive number of potential combinations to try, and tons of challenge run potential.

Moving onto the story, you play as Miriam, a Shardbinder. Shardbinders are people who have had a demonic Shard fused with them using alchemy, and this gives them the ability to absorb Shards from demons in order to gain powers. Miriam’s childhood friend, Gebel, is also a Shardbinder. Unlike Miriam, he seems to have turned to using his powers for evil, summoning an enormous castle from Hell that’s filled with demons. Naturally, these demons begin by destroying a nearby town, so the church is dispatched to deal with them, and they enlist the help of Miriam. The story is pretty good, but it isn’t the focus of this game. It’s basically just an excuse to get a huge demon-filled castle in play, to faciliate the exploration and combat, and I’m totally fine with that.

The castle is huge by the way. I don’t know exactly how it compares to the maps of the Castlevania series, but it definitely feels larger. Although Symphony of the Night might be just as big if not bigger, but either way, Bloodstained’s map is fun to explore. There are fast travel points at pretty regular intervals, so you don’t have to trek through the entire castle over and over again if you need to leave and restock your supplies. There are also items you can buy that instantly warp you back to your home base outside the castle. Those are nice in a pinch if you find yourself low on health and just need to get out, or if you don’t want to walk back to warp point.

Since this is a metroidvania, there are also some areas you aren’t able to reach until you get upgrades, and then you can backtrack and use your new ability to explore further. One of these abilities is the Double Jump, which understandably opens up a lot of new areas. But all the other abilities are pretty creative. There aren’t a lot of them, but the few that are present here are pretty novel ideas. One is a sort of ricochet teleport ability, where you aim a beam of light that reflects off of walls and mirrors, and when you trigger it you teleport to the end of the beam. It’s pretty cool to line up a teleport reflecting off of several mirrors, and then zip to the end of the beam instantly.

Something you may have noticed from the screenshots: the level of goofiness in this game is pretty high. The Castlevania games were no strangers to this, with some out of place weapons and equipment from time to time and anachronistic food items like pizza, but Bloodstained takes it to another level. This is mainly because certain equipment shows up on Miriam, so if you find a hat that looks like a teddy bear and you equip it, she’s going to look pretty silly for a while. But hey, good armor is good armor. Some of the enemies are also pretty “out there,” like the giant cat enemies that summon fire and swat at you. Apparently, these are based on the pets of some KickStarter backers. There was a US$3,000 tier to get your pet added to the game as an enemy, and several of the backers must have backed at that tier because there’s about 5 enemies like this in the game! 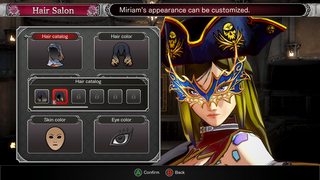 If dressing Miriam up in stupid hats and accesories isn’t goofy enough for you, there’s also a character customization screen you find pretty early on. Here, you can change her hair style and color, eye color, the color of her clothes, and even her skin color.

For the most part, progression in Bloodstained felt really intuitive. It was easy to see where I hadn’t explored yet, and after getting new items it was pretty easy to figure out where I needed to go next. There were two occasions where I had wandered around clueless for a while though, and had to look up a guide to proceed. One was midway through the game, and the other was closer to end. The first one was the more irritating of the two, because I don’t know how you would figure it out on your own.

Aside from that, Bloodstained was an incredible experience! There’s also a ton of replay value here. There’s a New Game+ mode where you can carry most of your equipment and shards into a new playthrough, potentially on Hard or Nightmare difficulty. There’s a Classic mode that pays homage to the pre-Symphony of the Night Castlevania games, altering the controls and mechanics to make Miriam feel a lot like Simon from Castlevania on the NES. I’ll probably never play through Classic mode, but it’s cool it exists! I played through a little bit of it and they really nail the NES Castlevania feel.

So that’s Bloodstained: Ritual of the Night in a nutshell. I really enjoyed this game! If you’ve enjoyed the Castlevania series, you should definitely check out Bloodstained. I’ve rambled on enough, so I won’t go into detail, but the music was really good too (composed by Castlevania series composer Michiru Yamane). My final playtime was 11:36.