Metroid Dread is the only game in this post, and while my coverage of it is free of story spoilers, there are some screenshots of bosses and abilities you unlock. If you don’t want any of that spoiled, you should stop scrolling now!

After nearly 20 years, we finally have a sequel to Metroid Fusion! The Metroid series wasn’t entirely dormant in that time though. I haven’t played it, but 2010 saw Metroid: Other M release on Wii, and Metroid: Samus Returns on 3DS was a nice re-imagining of Metroid II in 2017. But to finally have a new, original 2D Metroid adventure with Metroid Dread…I still can’t believe it’s real, even though I’ve played it!

Everything I want in a 2D Metroid game is here: a lonely sci-fi atmosphere, several utility upgrades and gating, optional energy tank and missile expansions, a complex map, and boss battles. It’s all done very well, developer MercurySteam have definitely proved themselves in my mind in the metroidvania space with Samus Returns and Dread. On top of bringing back the fun of classic 2D Metroid, there are also some new elements.

The big new elements here are the E.M.M.I. Zones, and the E.M.M.I.s within them. These are areas on the map where the murderous and lethal E.M.M.I. robots patrol. Entering one plunges you into a foreboding atmosphere. There’s a sort of noise filter over the visuals, and the music becomes really tense as well. From the minute I first entered one, I was on edge, and that was before I even saw an E.M.M.I.! Once you encounter one of them, things go from spooky to terrifying in a hurry.

The E.M.M.I. can hear you when you jump or shoot, and they’ll start heading toward the noise. If they see you, they go into full pursuit mode, and the exits are sealed. Your only option at that point is to run, and get far enough away that the E.M.M.I. loses sight of you, and the exits reopen. If at any point an E.M.M.I. touches you, you have a small window to counter the attack and escape, but the timing is really difficult to gauge. I only did this successfully once in my entire playthrough. In most cases, being caught by an E.M.M.I. means instant death - and I mean that, they don’t damage your health, they just take you straight to Game Over. Luckily, there’s a good checkpoint system, and you can retry from just outside the E.M.M.I. zone, allowing you to jump back in for another try at making it through alive.

The map is split into areas connected by elevators, just like always in 2D Metroid games. Most of the areas feature an E.M.M.I. zone somewhere, and the area is designed in such a way that your path will wind in and out of the E.M.M.I. zone several times as you make your way through the area. Whenever I had to enter an E.M.M.I. zone, I always got a little nervous. Although, by the end of the game, when I’d already been caught and killed by an E.M.M.I. many, many times, I was definitely calmer about going through the zones, and didn’t panic as much when spotted by them. That said, I think the number of E.M.M.I. zones was just right. Any more and they’d have become stale and the sense of urgency and fear in them would have completely disappeared by the end of the game.

I think Metroid Dread is probably the hardest Metroid game (though admittedly I haven’t finished the original NES one, and I haven’t played Metroid II or Other M), but it’s not because of the E.M.M.I. - it’s because of the boss battles. Their attacks shred through Samus’s health, so you have to get good at dodging them. You also don’t have a lot of time to figure out what attack they’re about to do, so you have to react quickly, and then move quickly. Luckily, Samus has a lot of ways to move in this game, as she’s able to slide from the very beginning, and you get upgrades to allow you to do quick dodges to put some distance between you and the enemy. I died many times to most bosses in this game, each time figuring out how to dodge their attacks a little better. This loop of figuring things out a little more each time is just as satisfying as it is in other metroidvanias with challenging boss battles. They had me yelling and cursing at my TV sometimes, but when I finally took down each boss, the feeling was wonderfully cathartic. If you enjoyed games like Hollow Knight or Blasphemous for their boss battles, then you’ll feel right at home here. 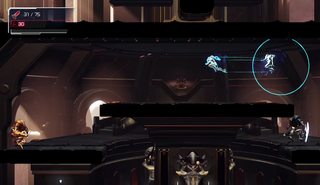 One bad thing I have to bring up, in the 1.0.0 version of Metroid Dread, there’s a pretty nasty bug that crashes your game after defeating the final boss, right before the game ends. I was affected by it, as were lots of other people. Ironically, I had read about the bug before reaching the point myself, but I didn’t think it applied to my save file. I was wrong! Like many others, I’d made it through the final boss battle, and was all set to beat the game, only to have my Switch tell me a problem had occurred and the game had to close. From reading the comments on a Reddit post about the issue, I learned that the bug occurs when you reach the final door in the game with Map Markers still placed on your map. After restarting the game, I cleared all my map markers, fought the final boss again, and breathed a sigh of relief when I made it through the final door without the game crashing. Nintendo has said this will be patched soon, and I didn’t have a single other technical issue with the game.

With that out of the way, I had a blast playing Metroid Dread. It feels really good to be able to play a new 2D Metroid game again, I really hope Nintendo continues to work with MercurySteam on more 2D Metroid games in the future! And I hope it doesn’t take another 20 years for another 2D Metroid to happen! My final time was 06:06, and I’m pretty proud of that for my first playthrough. My item collection rate was pretty low as a result though, at 39%. As usual, there are completion rewards for clearing the game quickly, and with my first playthrough, I unlocked 2 of them: artwork for Metroid Zero Mission and Metroid: Samus Returns. These were super cool to see, it was a nice way to cap off the experience!

I played on my cleared save file some more and got 100% item collection after a few hours of picking up the remaining collectibles around the map. Some of the shinespark challenges you had to complete to get a few items were tough! I looked up guides for those items on YouTube but even after knowing how it could be done, executing the techniques required still stretched the limits of my skill. I’ll probably replay Metroid Dread and try to get a faster time, potentially on the Hard Mode difficulty you unlock after you beat the game, in order to unlock more of the ending rewards for clearing the game quickly. This might be a game I actually unlock everything in!