Spoiler warning for Shin Megami Tensei: Strange Journey Redux, I spoil the ending, final boss, and other late game things too. If you want to avoid spoilers, please skip that section!

I finished Shin Megami Tensei: Strange Journey Redux this week! The road to the end was every bit as epic as I’ve come to expect from the SMT series. Since I was on the Law route, my path was blocked by Chaos demons as bosses and mini-bosses.

Most of my time this week was spent going through the final dungeon. It was a long one! On top of the elements used in previous dungeons, it also had rooms where the paths were invisible on the automap until you walked on them. I treated these mostly the same as the Dark Areas: just bump into walls until you find the right path! There was one part where I just could not figure out how to advance, and I had to look up a walkthrough. Turns out I had missed an invisible door, and I just needed to find and go through it. After that, I hit my stride dungeon crawling again. This was a good final dungeon, long enough to feel like a real challenge but not too long that it becomes fatiguing.

Before I reached the final boss, I had heard they were difficult. What I’d heard was accurate; this was one tough fight! When I first reached them, I was level 72, with the rest of my party as low as level 63. I gave it my all, using healing items like no tomorrow to heal party members, and I actually brought the boss’s health bar a lot lower than I expected on my first attempt before it wiped us out. All of Mem Aleph’s attacks hit hard, and most of them hit the entire party too. It also has insta-kill attacks, as well as the ability to inflict rage on the whole party, so protecting against both turned out to be very important. After that first attempt, I failed several more times. I did a little grinding, and came back 1 level higher. That time, my 9th attempt, I defeated Mem Aleph! After 8 tries, I was ecstatic to have defeated it! And then I found out it had a 2nd phase immediately after the 1st one I’d struggled so much to beat. The 2nd phase wiped out my entire party on the first turn, and I aggressively shut off my 3DS for the night.

The next day, I scoured the Internet for tips on how to approach this fight. Then I scoured the Internet for tips on how to grind quickly in this game, and found a tip on GameFAQs suggesting a specific area to defeat enemies easily, and to remove 2 members from your party since fewer party members means more experience for the remaining members. Using this strategy, I reached level 84 in about an hour, maybe an hour and half. As I gained levels throughout the grinding session, I periodically fused stronger demons, and eventually fused Metatron, a series demon who is usually pretty strong, and this game is no exception.

With my new team, I took on the final boss again. This was my 11th attempt. It was much easier after all that grinding, and with the knowledge gained from my other 10 tries. The first phase went down without any major hiccups, and we moved on to phase 2 again. Unlike the 1st phase which has no weaknesses, phase 2 has a weakness that changes every few turns, as well an element that it will repel that changes at the same time. Other than that, it’s very similar to the 1st fight. The 1st turn here was rough, with some of my demons getting knocked out, but I was able recover. Afterward, the rest of the fight went smoothly, and I finally defeated Mem Aleph for good!

I could feel the tension melt away after I walked out of that battle. It was a little weird that I had to walk out of the dungeon afterward, I had expected it to just go to a cutscene. Well, turns out Strange Journey Redux has another boss battle after Mem Aleph part 2, but I didn’t know that so I didn’t save between the two!

That new character, Alex, who I’d only seen twice throughout the whole game since I ignored the optional dungeon, showed up one last time to settle things. I went into the boss battle pretty nervous, and really not wanting to lose and have to fight Mem Aleph again. Luckily, Alex was a complete Joke to my party. We mowed her down, and with that I beat Strange Journey Redux, for real this time.

In the Law ending, absolute peace is brought to the world, with everyone becoming “one immense, harmonious spirit.” It’s an interesting ending: world peace was achieved, forever, but the cost was humanity losing all individuality. I alluded to this a little in my last post, but when you choose to go the Law route, you see a little preview of humanity’s future. The rest of your crew basically become brainwashed, with their eyes glazing over and their emotions becoming muted. It was honestly really sad to see, because they just don’t seem like themselves after that.

So yeah, that’s the gist of the Law ending. Really great game, if you’re looking for a RPG with a focus on dungeon crawling and some challenging moments, definitely think about giving Strange Journey Redux a try! My final time was 47:44.

In honor of Metroid Dread’s upcoming release, I decided to play another game MercurySteam developed: Castlevania: Lords of Shadow - Mirror of Fate HD. Wow, that’s a long title! So Castlevania: Lords of Shadow was a reboot of the series produced by Kojima while he was still with Konami. Mirror of Fate is a sequel to that game, originally released for the 3DS in 2013, and this HD version launched later for Xbox 360, PS3, and PC. 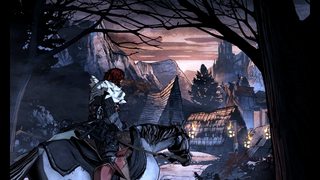 You play as several characters, with a different one for each act of the game. In the first act, you control Simon Belmont, whose name you might recognize since he’s the protagonist of the first Castlevania game, and he’s in Super Smash Bros. Ultimate. They went a different direction with his look in this game, giving him bright red hair. They probably took inspiration from Simon’s appearance in Castlevania: Chronicles.

Anyway, you’re Simon Belmont, and your goal, as always, is to kill Dracula. Lords of Shadow was very different from other Castlevania games. It’s a 3D action adventure game. Mirror of Fate is a lot more like the other Castlevania games, but there are a few areas where it differs. Right off the bat, the tone is much darker. It’s got that “gritty medieval fantasy” aesthetic going on. At first I didn’t really like this, but I’m used to it now.

The other major difference is with combat. Mirror of Fate feels a lot more like a hack and slash game than the other 2D Castlevania games. You have several combos at your disposal, and as you level up you’ll learn more. You can also block enemy attacks, except for unblockable ones that cause the enemy to glow before they launch the attack. Well-timed blocks cause the enemy to stagger, opening them up for a massive counterattack. It took me a long time to get used to this combat. I think my problem is that I kept trying to play it like a Castlevania game, and that doesn’t work because the flow is very different. I was trying to keep my distance from enemies, but here you don’t really need to, and it’s usually better to stay close and use your dodge roll and block as needed to avoid damage. Enemies that could block my attacks were especially annoying, as I didn’t really know how to deal with them. When I realized I’d learned a special attack from leveling up that let me break an enemy’s guard, things got a lot easier! 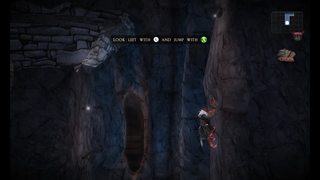 Another thing that stood out to me here is the climbing system. Similar to something like Assassin’s Creed or Uncharted, you can climb many obstacles, and you’re given glowing visual cues for handholds you can use. It’s not perfect, and I fell to my death several times when I assumed there was a handhold somewhere and there really wasn’t. But it works well most of the time, and adds a nice element to exploration.

Exploration itself is pretty guided, there’s an objective marker on your map telling you where you need to go, though I think you can turn it off if you want. The map is split into small sub-areas, and it’s largely linear, though there are a few areas with multiple exits leading to other levels. There are many optional things to find as a reward for carefully exploring each area, so that’s nice. Max health upgrades, max magic upgrades, things like that, as well as scrolls sitting by dead knights that don’t do much other than explain how they died and contribute to your completion percentage. You get utility upgrades as you progress that allow you to double jump, or swing from grapple points. In that regard, it does sort of feel like a metroidvania, but there’s really very little backtracking required.

There’s also several puzzles in this game, and that surprised me a bit. In most metroidvanias, there aren’t puzzles, because the non-linear exploration of the map basically is a puzzle. The ones in this game were fun to figure out though, so I’m not complaining.

One thing I really miss from the other Castlevania games: RPG elements! You level up in this game, but that’s about it, and it doesn’t seem to do much besides unlock new combat skills. Previous Castlevania games had equipment and items, stats, and all kinds of other RPG elements sprinkled in, and I miss those in Mirror of Fate. But if you look at Mirror of Fate HD on its own, and don’t compare it to the Castlevania series, it’s a solid 2D action adventure game. I’m in the middle of the final act now, currently at 6:30. HowLongToBeat.com lists the Main Story as 8:30 long, so I’m pretty close to the end. If you’re a fan of action adventure games, considering giving this one a try. It’s pretty simple, but it’s executed well, and it’s a fun time.