Spoiler warning: I show and talk about some bosses from Shin Megami Tensei: Strange Journey Redux, so if you want to go into the game completely blind, you should skip this post. There are no story spoilers though!

For the last two weeks, I’ve continued Strange Journey Redux, and I’m nearing the end now! I’ve covered a lot of ground in that time, and I’m surprised at how much I’ve enjoyed the game since I’m not usually into first-person dungeon crawlers.

As expected, the dungeon layouts become a lot more involved as you progress. There’s some trial and error involved finding the right path, with things like teleporter mazes where the wrong one sends you backwards. These kinds of gauntlets usually have a few shortcuts you can unlock to save time though, so if you need to leave the dungeon to heal, or if you take the wrong teleporter and get sent back, you can get back to where you were more quickly. You can also save and take a break at any time during the dungeons, which is really nice! All of this combines to create dungeons that are engaging, requiring a bit of memorization to get around. 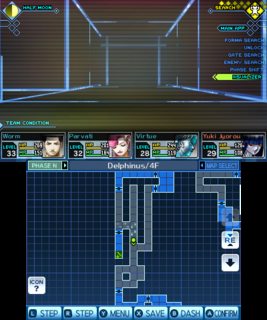 There are a few especially tough parts that require a little patience. One of the later dungeons is particularly infamous for this, and I definitely went in circles there a few times before I figured it out. I don’t care for the Dark Zones either, which are areas of total blackness that you have to navigate blind, and they don’t get filled in on the map either. Most of the time their layout is pretty simple and you just have to turn a few corners in the dark or find an exit door. Later on, you get upgrades that let you see in these dark areas, and allowing them to appear on the map. This whole mechanic was present in SMT 1 too, and it’s a lot nicer and more forgiving in this game! Overall, I like the dungeon design in Strange Journey, I think it works well. 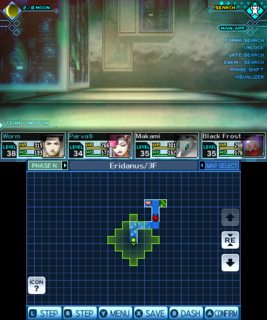 Of course, as you’re dungeon crawling there are random encounters, but the encounter rate is quite comfortable. It never felt too high to me. You can also get equipment to lower the encounter rate (or increase it, if you’re grinding or something), which definitely helps when backtracking through an earlier dungeon or trying to focus on exploration.

Not that I mind the encounters though - the battle system has grown on me even more! It’s really satisfying when you have a full team that matches your alignment, you hit the enemy’s weakness, and you unleash a full power co-op attack. This does a ton of damage, and you can mow down regular enemies with ease.

While normal enemies aren’t much of a challenge anymore, there have been some tough bosses. Most notably: Ouroboros. That was a tough boss. You have to fight it twice, and both fights are challenging for different reasons. The 1st time, it automatically heals by a decent amount each turn, so you have to deal consistent damage every turn to wear its health bar down, while keeping your party healthy. In the 2nd fight, Ouroboros doesn’t heal, but it has nastier attacks, like one that damages the whole party and causes random status ailments. You can protect your party against status ailments for a few turns at a time by using the Brave Heart skill, but the boss has a nasty habit of waiting until your protection wears off and then inflicting the entire party with ailments. I did a little grinding to prepare for this fight, but what helped more was rethinking my strategy, and paying attention to how the boss AI reacted to buffs and debuffs. Eventually, I won. I don’t have any more to say about it specifically, I guess I’ve repressed those memories.

I won’t talk about the plot much to avoid spoilers, but it’s good! I’ve chosen the Law route, and while I feel bad about what my character ends up doing in this route, and about the ultimate goal he’s now pursuing…it makes for an interesting story!

I’m in what I think is the final dungeon of the game now, so I expect to finish it in the next week, unless I get really sidetracked with side quests or fusing demons. Since this is Strange Journey Redux, there’s an additional optional dungeon, as well as a new character who shows up early in the game to introduce the player to the new content. I’ve basically ignored the new content since it’s my first playthrough, but if I ever do another playthrough maybe I’ll check it out!