The post is spoiler-free this week, so you can read on without fear!

The story in this one is more sci-fi than the other mainline SMT games. A spatial anomaly called the Schwarzwelt has formed in Antarctica, prompting the United Nations to send an elite team to investigate and keep the growing threat from consuming the entire planet. Naturally, things go south almost immediately, with the 3 teams becoming separating and crash landing in the Schwarzwelt upon entry. To make things worse, they soon realize they’re not alone when demons they can’t see begin attacking and killing crew members. The entire crew would have been killed if not for the mysterious gift of the Demon Summoning Program. It appears suddenly in the player character’s possession, allowing them to see the demons, and fight back!

I’ve got to say, I really like this story setup. It feels a lot like one of those monster horror movies where a team of explorers gets trapped in some remote place, and they’re fighting to escape alive. Except in this case there’s tons of monsters, and you can recruit them. I think it works really well though, it’s cool!

Gameplay-wise, this feels more like the older Shin Megami Tensei games than the newer entries. Exploration is first-person, and there’s no Press Turn battle system. There’s no world map either, so that’s another area where it differs from the other mainline games. The dungeons are fun to explore though. They’ve been pretty tame so far, with only basic elements like one-way doors, floor tiles that damage your party, and pitfalls to dodge around. I’ve heard the later dungeons get very complex, and I’m sure I’ll be glad to have the map on the bottom screen when I get to that point! 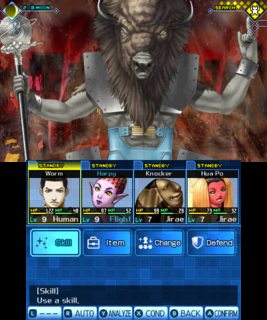 Like I mentioned earlier, this game doesn’t have the Press Turn battle system. That’s another way it feels like SMT1, you assign commands for your entire party before any of them are executed, and then everything plays out based on speed. In place of the Press Turn system, Strange Journey has Demon Co-op attacks. When you hit an enemy’s weakness, party members with the same alignment as the attacker will automatically launch a follow-up attack to deal extra damage. The more party members that match that alignment, the more damage the follow-up attack will deal. It works with attacks that damage all enemies too, so if the entire enemy team is weak to fire and you hit them with Maragi, you’ll launch a follow-up attack against each enemy. Initially, I wasn’t too sure about the battle system, but I’m enjoying it. Its no Press Turn battle system, but it’s definitely fun in its own right.

Another thing that spices up battles is that the first time you encounter an enemy type, it appears as an Unknown. You won’t know what kind of demon it is, so you don’t know what sort of attacks to expect from it, or what its strengths and weaknesses will be. I mean, I guess that’s kind of true of the first time you encounter a demon in any SMT or Persona game, you aren’t sure of its resistances or attacks since those change from game to game. But in this game it’s taken a step further, since you can’t even guess as to what type of attacks it will have until after the first time you defeat it. It’s a neat bit, I think it helps keep things interesting when exploring new areas.

Demon negotiation is here, and the demons once again have really amusing dialogue. They just come out with such unexpected questions and reactions, and pretty often in this game. One time I was talking to an Angel, and it asked me to compare it to a fruit. I think the options were watermelon, tomato, or…I can’t remember the third one. Anyway, I went with tomato, with low confidence that it was the right answer. The Angel responded something like “ah, yes, you are a man who appreciates the true qualities of a tomato,” and I laughed a little bit on the inside. The dialogue with demons just has that special SMT flair, maybe even more than usual in Strange Journey, and I love it!

One last thing I want to highlight, the music in this game. It’s very different from previous SMT games, with lots of horns, strings, and chanting. It really adds to the atmosphere of the game, and works really well.

That’s it for my experience with Strange Journey Redux so far. I’ve enjoyed it a lot! I’m playing on the Standard difficulty, and it hasn’t been too challenging so far. Random encounters have been more of a threat than the bosses, with the Game Overs I’ve seen coming from tough enemies rather than tough bosses. There are harder difficulties available for those who want more of a challenge, but the changes in Redux make it easier in general than the original DS game. Personally, I like it this way! I’m here for the experience rather than the challenge, and what an experience it is! I don’t know what the future holds in Strange Journey Redux, but I can’t wait to find out!