Spoiler warning for Castlevania: Order of Ecclesia! I spoil the last part of the game, please stop reading if you want to avoid spoilers!

I finished the game this week, and there are a few things I definitely want to talk about! First off, this game isn’t immune to the curse that plagues so many metroidvanias: getting the true ending is locked behind a somewhat obscure requirement. It’s not that bad in this game, you just have to rescue all the villagers trapped by Albus scattered throughout the world. Most of these are right in your path or in a side room, and if you explore carefully you’ll find them. But there are 2 that are in hidden rooms, the only way to find them is to either attack every wall you see to check if there’s a hidden room behind it, or use a guide. I used the latter. As far as true ending requirements in metroidvanias go, this one is pretty straightforward actually, and would be a piece of cake if not for those 2 hidden villagers. 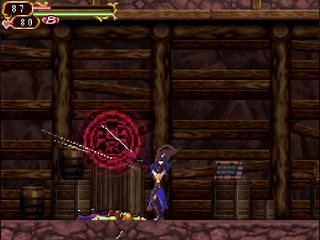 If you haven’t rescued the villagers, you get an automatic game over after defeating a difficult boss, Albus himself, and the game gives you a hint telling you to rescue everyone. Having to re-fight the boss is a bit of a slap in the face, but by that point I’d died to him enough times that I had figured out a decent strategy. With Albus defeated, it’s finally time for the true enemy to show his head: Dracula.

I wasn’t entirely sure Dracula’s Castle would be in this game. I mean, it’s in the promotional art, but I thought that might just be a marketing gimmick. I was really glad when it appeared though, because exploring Dracula’s Castle is always super fun, and 2 of the Castlevania games I’ve played take place entirely in the Castle so there’s definitely some nostalgia there for me. There’s also a really cool looking cutscene that stretches across both screens, with Shanoa approaching the castle. Such a cool moment! The screenshot really doesn’t do it justice. After that, Shanoa storms Dracula’s Castle by herself, and the final stretch of the game begins!

This was my favorite section of the game, though I do have some complaints which I’ll get to in a minute. It’s a pretty good incarnation of Dracula’s Castle, with paths that loop back and allow you to unlock shortcuts, tough enemies, and more awesome music. It also features a tiny bit of non-linear exploration, because in order to unlock the final area, you have to explore and find the 3 Cerberus glyphs. That part is still mostly linear though since you can only get to them one after the other, but it is possible to miss one if you don’t explore fully and have to come back for it later. So…it’s technically non-linear, I suppose?

That brings me to my biggest complaint, which might actually be a positive for some players: most of the bosses are super challenging at this point. I had strugged a little with some earlier bosses in the game, but nearly every boss in Dracula’s Castle wiped the floor with me several times before I started to figure them out, and even after that I still saw many more Game Over screens before I managed to beat them. I’m not that bothered by this though, because I’ve enjoyed games with challenging boss battles in the past, but it’s not something I really expect with Castlevania. I’m used to the bosses looking impressive, but going down pretty easily, and that wasn’t the case for most of them here! 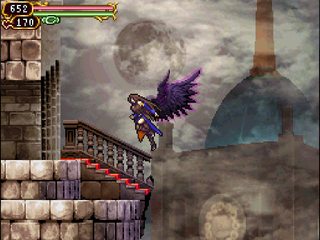 I also wish there were more utility upgrades. The progression is really driven by you clearing areas, instead of you finding new power ups which in turn allow you to reach new areas. That said, there are some cool abilities - the magnet power is cool, but not used very much. Very late in the game you get wings and can fly around, that was pretty cool!

My complaints end there though. Everything else in Order of Ecclesia was great! There’s a satisfying showdown with Dracula at the end, and yes, he killed me many, many times. But I prevailed eventually, his castle crumbled away, and the credits rolled. I love the design of this credits crawl, the background is this really great minimalist forest at night, with Shanoa’s silhouette in the center. It just looks so good!

Overall, I really enjoyed Castlevania: Order of Ecclesia. Shanoa is probably my 2nd favorite Castlevania protagonist, after Alucard. With this one finished, there’s still 1 more DS Castlevania game I haven’t played, and 2 more on GBA. Maybe someday! My final time was 9:03.