This week’s post is spoiler-free for all 3 games covered.

This is a retro, 8-bit/16-bit styled 2D action platformer, and a really good one at that! Really difficult at times, yes, but extremely fun nevertheless. You play as a ninja whose village is the last vestige of humanity after a war with demons centuries ago. They remain vigilant, as legend says that the demons will strike again and try to eradicate them someday. They also have legends that speak of the Messenger, one who will be tasked by the Western Hero to carry a scroll paramount to the clan’s survival across the land. Just minutes after the game begins, all these things come to pass - the demons attack, razing your village, and the Western Hero arrives, kills the demon king, and tasks you with delivering a scroll, making you the titular Messenger.

As an 8-bit styled 2D action platformer, gameplay consists of you running to the right, navigating obstacles, and fighting enemies and bosses. The platforming in this game is really unique. You don’t have a typical double jump, but instead you can only jump in mid-air after hitting something with your sword while airborne. This is called the cloudstep technique, and it’s pretty awesome! There’s no limit to how many times you can cloudstep either, so you can remain in the air forever as long as you have enemies or other objects to attack in to replenish your cloudstep. You can also buy upgrades that give you helpful abilities as you go, and there are also mandatory upgrades you’ll be given as you progress, like the ability to climb walls and the rope dart (which is basically a horizontal grappling hook). It all comes together to create platforming that flows really, really well.

The game progresses like that for a few hours, depending on how fast you go through the levels, and then it takes an interesting turn: it becomes a metroidvania, and goes 16-bit! At that point, you unlock the world map and area map, allowing you to see where you’ve been, and a few warp points to quickly revisit areas you went through in the past. The first time through, you went through all these places from left to right, but now you’ll be going right to left quite often, and it makes for an interesting switch.

The first part of The Messenger is great, but the 2nd part, after it goes full non-linear metroidvania mode, is probably even better. One of the interesting things is that you get access to portals that swap the world from 8-bit to 16-bit, and parts of the levels change depending on which style you’re in. Maybe there are spikes on the floor in 8-bit that won’t be there in 16-bit, or a wall that goes away. This adds a nice layer to the experience, and sometimes gives it a nice, light puzzle solving feeling.

Now, maybe you don’t normally like metroidvanias because you hate backtracking and feeling lost. Well, The Messenger offers a nice solution to that problem. You’re given pretty cryptic hints about where to go next by one character, but if you want a more concrete answer, you can pay the shopkeeper a small fee to figure out what the other guy actually means, and he’ll mark the spot on your map you need to go next. It’s that simple. For the most part, I explored the world on my own and found most of the things I needed to, but there were definitely a few times I was glad to have the shopkeeper’s help!

The last thing I want to mention about this game is that it’s pretty funny. It’s very light-hearted and jokey throughout, and the characters make references to it being a video game a number of times. On top of that, you run into some genuinely amusing twists too, like how after you defeat a certain boss, it turns out he wasn’t really evil and it was all a big misunderstanding. Then you apologize, he accepts your apology, and you part on good terms. It’s a funny exchange that I can’t really do justice just explaining. To summarize, I definitely recommend The Messenger to anyone interested in innovative, challenging platformers or metroidvanias. Plus, it has a really good soundtrack! My final playtime was 7:42.

Catmaze is another metroidvania I started this week, but unlike The Messenger, I didn’t finish it, and I don’t think I will. I don’t think it’s a bad game, it’s just an okay game. It’s set in a fantasy world inspired by Slavic folklore, where you play as Alesta, a young sorceress trying to help her sick mother.

Looking at the screenshots I took, they actually look pretty good. The sprite art is vibrant and colorful, and it looks nice. But the game doesn’t look as good in motion, and I can’t exactly pin down why. I don’t know if it’s that the animations are rough or have too few frames, or maybe it’s the animated grass tiles. It’s hard to explain.

I think the gameplay in Catmaze fares a little better than the visuals though. It’s pretty basic metroidvania stuff: explore, fight enemies, get new abilities and weapons. There are enough branching paths to explore on the map to make it interesting. Enemy behaviors are pretty simple, they start attacking you once they’re close enough. I think it’d be better with more interesting abilities. I played for about 2 hours, and in that time the only interesting power I got was the double jump, and that was right near the end of my 2 hours playing it.

I don’t want to be too hard on this game though, because with the exception of the music, it was made by one person. It might be a bit rough around the edges, but just the fact it was brought to market by a solo developer is pretty impressive. I have to give them credit for adding things like Steam achievements and trading cards too, those are nice touches to have.

Another thing I will give Catmaze credit for, it pulls from some novel source material. Slavic folklore isn’t something a lot of games tap into, so it feels pretty fresh in that regard when characters talk about creatures like Domovoy or Kikimora. As you might have wondered from the title, the game is also obsessed with cats. Several characters mention how great cats are, and how they’re from another world or something.

I’d have a hard time recommending Catmaze to anyone. If you’re a fan of metroidvanias and have played a lot already, it probably pales in comparison to your favorites, and if you’re looking to get into the metroidvania genre there are way more polished games you could start with.

I started one last metroidvania late in the week, Castlevania: Order of Ecclesia. You play as Shanoa, a warrior of Ecclesia, an organization formed to fight against Dracula. She loses her emotions and memories when another member, Albus, betrays the order during an important ritual, and steals Dominus, a powerful magic that Shanoa was meant to be a vessel for. 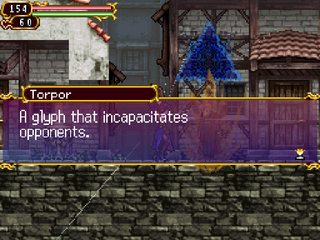 A lot of mechanics from prior Castlevania games return here, but it also does a few things differently. Enemies sometimes drop glyphs after you defeat them, which Shanoa can absorb to gain new attacks and skills. This is basically a new iteration of the souls system from the 2 Soma Castlevania games.

Where this game differs from its predecessors is that, so far, it’s been a lot more linear, because it has a world map and the game is split into different areas. Each of these has some metroidvania elements, like branching paths to explore and sometimes new abilities, but on a very small scale.

We’ll see if the game becomes more non-linear later on, but even if it doesn’t it’s a lot of fun. Combat is really satisfying, the different weapon type glyphs you collect all handle a little differently, with varying levels of delay between attacks, and some projectile attacks. It’s the same level of flexibility offered by past Castlevania games, and it’s just as great as always. The bosses have been cool so far too, it’s always fun facing off against these huge monsters. The music is really good too, as expected of a Castlevania game. I’m looking forward to playing through the rest of the game in the next week!