Spoiler warning for Ni no Kuni: Wrath of the White Witch, I spoil several things from the late game, so if you want to remain unspoiled, you should skip this week’s post!

Ni no Kuni: Wrath of the White Witch Remastered (PC)

My adventure through Ni no Kuni came to an end this week, as I finished the game! The remainder of the adventure contained a hunt for magical stones that I could retrieve in any order, and the journey took me through a host of varied locales. And of course, it involved a showdown with the Dark Djinn, Shadar!

Like I mentioned, at a certain point the game has a non-linear section where you have to retrieve 3 magical stones from 3 different locations. You can tackle these in any order, which is a design choice I enjoy in games. One stone had me visit a winter wonderland, including Yule, an icy town full of warm-hearted people. Another stone had me delve into a dungeon where the party became afflicted with a frog curse. It might all sound like “just another quest for the magical MacGuffins,” and it is, but I think the segment has enough variety to make it enjoyable.

Getting the stones allows Oliver access to a more powerful wand, and after another story segment to obtain another MacGuffin, the group can finally proceed towards Shadar and storm his castle.

As a final boss, Shadar naturally has 3 phases. None of them were particularly hard. Oliver has a powerful light spell at this point, and my familiars were pretty tough by this point too. So we defeated Shadar, and restored peace to the world! 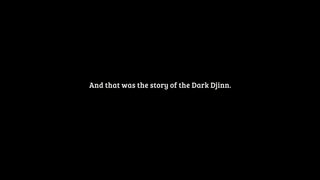 That’s where the game ends…in the DS version. Yeah, so there’s actually a Japan-only DS game called Ni no Kuni: Dominion of the Dark Djinn that came out almost a year before this original PS3 version of Ni no Kuni: Wrath of the White Witch. The story is basically the same in both versions, but Wrath of the White Witch has additional story beats spread throughout the game that tie into a new final chapter after Shadar is defeated.

If not for those added story beats, it really feels like Wrath of the White Witch could have ended with Shadar’s defeat too, but with the added story stuff there are some questions that haven’t been answered yet at that point, so I wasn’t surprised the game continued for a little longer. The story took a pretty unexpected twist at that point: white ash begins falling from the sky as Oliver is preparing to head home after saving the world, and the ash turns everyone in the major cities into zombified monsters. Given how cutesy the rest of the game is, that was a pretty unexpected turn. 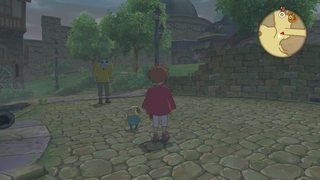 That’s another segment of the game where you can tackle the objectives in any order, as you have to travel to each kingdom to restore the citizens to their normal selves. It was kind of neat traveling through the towns I’d grown used to and seeing the zombified citizens still standing where they always did. Like, you’ll see guards standing at their usual posts, but now they’re horrible creatures and they’ll attack you on sight.

Before too long, it’s time for the real final dungeon and final boss: the White Witch and her floating palace. It’s not too long a dungeon, none of the dungeons in this game are all that long, but there are branching paths to explore to treasure if you’re the completionist sort. I won’t spoil the final boss battle or any of the details. It’s a fun fight, I found myself having to use several of my stockpile of healing items for HP and MP throughout the several phases of the fight. I also died during the final phase on my first try, when the boss was down to a quarter of their health too. That was pretty discouraging, but I used the opportunity to teleport out of the dungeon and do a side quest to get one of the most powerful spells in the game, as well as another spell that makes you invisible to enemies. With those spells in hand, going back through the dungeon to reach the boss again was a breeze since I didn’t have to fight any enemy battles unless I wanted to. I had also stocked up on a lot more healing items to make sure I didn’t run out, and with the new spells and more items, I was able to beat the boss without much trouble the 2nd time around.

With that, Ni no Kuni: Wrath of the White Witch was truly over. The final chapter ties up all the loose ends nicely, and while it doesn’t feel entirely necessary since the story could have wrapped up just fine after defeating Shadar, I still liked it. I liked the additional backstory it gave to the world and some of its characters. It sort of reminds me of the extra story content in Persona 5 Royal. They both feel a little tacked on in some respects, but the new stories they tell are great in their own right, and the gameplay is fun. My final time with this one was 35:20 according to my save file. Since it’s an RPG, there’s a lot of side content, and I didn’t really get into that much of it, though I did do a number of side quests her and there. If you totally ignored the errands and side quests, you could probably cut several hours off that time. Anyway, I quite enjoyed this game. I might give the DS version a try at some point since it got an English fan translation back in 2018, and I’m pretty curious how different they are.