Spoiler-warning for Shin Megami Tensei: I spoil the end of the first act and several events from the middle of the game. If you want to remain unspoiled, it’s probably best to skip this week’s post!

My adventure through the demon-infested dungeons of Shin Megami Tensei continues! 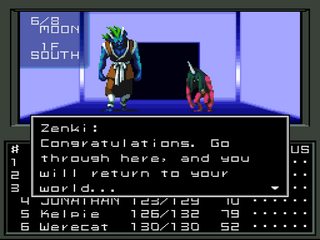 In the first act of the game, you’re exploring Tokyo in a contemporary setting. But at the end of that first act, things change drastically: Tokyo is hit by a barrage of American nuclear missiles, which sparks global nuclear warfare. The main cast is saved from the nuclear strike by Isabeau, the heroine I named in the beginning of the game, as she teleports them to the underworld, Kongōkai. She is unable to save herself though, and dies to ensure your party’s safety. Time flows differently in the Kongōkai. After you make your way through a winding dungeon, the party reaches their own world once again and find that 30 years have passed, and the world is still full of demons and now in a post-apocalyptic state.

The chaos hero, who I named Walter, is pretty fixated on becoming strong and gaining power. When you meet him in the beginning of the game, he’s being beaten up by some thugs lead by a man named Ozawa. Eventually, you find Ozawa again, and his demon, Take-Minakata, attacks you. Your initial encounter with him is scripted, and you take a bunch of damage and then are forced to retreat. This sets Walter off, and he resolves to do anything to gain the power to defeat Take-Minakata so he can kill Ozawa. After that, the next time you enter the Mansion of Heresy, the place you go to fuse demons, a cutscene triggers. Walter decides that he will fuse himself with a demon to gain the power he seeks. It’s actually pretty cool, one of the demons in your party is selected at random and fused with Walter, and then he gains 10 levels and basically turns into a ninja. Once that happens, you can go back to fight Ozawa, and this time you’re actually allowed to fight Take-Minakata for real. It was an easy boss fight. After that, Walter kills Ozawa and promptly leaves the party.

You’re only 1 party member short for a little while though. Shortly after that, you find the source of the voice you’ve been hearing in your head since returning to Tokyo: a young woman also named Isabeau, who turns out to be the reincarnation of the Isabeau who died saving you 30 years earlier. This Isabeau is imprisoned by the Messians because her mind is possessed by a demon. Luckily, by defeating Ozawa you’ve also earned the gratitude of a psychic man Ozawa kept imprisoned in order to use his psychic powers to control people. The psychic is able to project your party into Isabeau’s mind so you can defeat the demon that’s tormenting her. You do that by exploring a long dungeon, probably the longest in the game so far. At the end of the dungeon, you fight the demon responsible: Arachne. It was an easy fight since most bosses can be stunned by Zio skills, and then they can’t really fight back. With new Isabeau freed, she joins your party, and you’re back to a full group!

…Until the Law hero, Jonathan, is killed towards the end of the next dungeon. He’s not killed for good though - God saves his soul and reincarnates him, but you don’t meet him in his reincarnated form until a bit later. Either way though, Jonothan is out of your party too at that point, and it’s just you, Isabeau, and your demons, taking on whatever gets in your way. 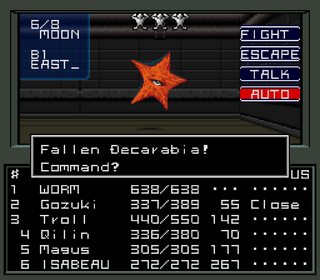 So the story has been really cool, and the dungeon crawling and battles have continued to be really enjoyable too. Admittedly, some of the progression was a little obtuse, and I had to use a guide for a few parts prior to the Chaos hero leaving the party. Like, I was able to go to the next area before defeating Ozawa, and I found a key item there that I would need later, but when I realized I had to go back to Ozawa he was afraid to speak to me with that key item in my inventory, and I had to throw it out before the story would progress. That was a little weird. Everything after that has been doable without a guide though, which is great!

I’ve aligned my character with Law in this game, and because of that we were thrown in jail by the forces of Chaos for a bit, but escaped. I actually went back and killed the demon who’d imprisoned us, Yoma, before leaving the prison. I’m not sure if I had to do that, I just found the room where they originally carried out our trial and wondered what would happen if I went in. That was a pretty cool moment, it’s nice when there’s (potentially?) optional fights like that.

That’s it for Shin Megami Tensei for now. It’s a good, retro dungeon crawler RPG, I’m having a blast playing it!