The Shin Megami Tensei marathon continues! This week I started the first game in the Shin Megami Tensei series, a reboot of sorts to the Megami Tensei games Atlus released for the NES in Japan. Shin Megami Tensei was originally released only in Japan on the Super Famicom, but it eventually got an official English release in 2014 on iOS, but that version won’t run on modern iOS versions, so unless you have an old iPod Touch or something, you won’t be able to play it. With that in mind, I’m emulating the SNES version with an English fan translation patch, as well as a few other patches to improve a few things, like one that changes the translations of spells to match up with later official translations better, like updating the names of spells and demons, etc..

In classic RPG fashion, you name not only the player character, but also the party members who will join you along the way - the Law hero, the Chaos hero, and the Heroine. As is tradition, I named my player character Worm and looked up some tips online for what to set his initial stats to. After naming each character at this point, you have to assign 18 stat points to their skills, which was a little overwhelming, but if you mess up here you’d eventually be able to get on track after enough level ups…probably. Anyway, lacking originality, I named the other characters after their rough equivalents in Shin Megami Tensei IV. The Law hero became Jonathan, the Chaos hero became Walter, and the heroine, Isabeau.

After beginning the game in a trippy dream sequence, the player character’s mother wakes them up, and sends them out on some errands. Before you leave, you receive a strange email about demons of legend appaering in Tokyo, a some file called a Demon Summoning Program, which you download, just in case. You then head out into the streets of Kichijoji, an area in Tokyo known for its banger background music. It’s anything but an ordinary day. Streets are cordoned off by the military, and you hear rumors about a girl having been killed in the park nearby. Some time later at the mall, you suddenly witness a demon tear out a man’s throat, and it comes at you next! You have no choice but to pick up the dead man’s knife and defend yourself, entering your first battle!

Like several other RPGs of the era, Dragon Quest and Phantasy Star come to mind, Shin Megami Tensei features a first-person, turn-based battle system. With the exception of the world map, the whole game is first-person actually. This game predates the super addictive Press Turn battle system of Shin Megami Tensei Nocturne and its successors, featuring a more rudimentary battle system instead. Still fun though! You give commands to all your party members, then they’re executed in order after that based on character and enemy speed I think. Admittedly, most random battles don’t require any strategy. There’s an auto-battle option that assigns your whole party to do a basic attack or gun attack and then quickly plays through the battle like that unless you cancel it. I’ve engaged auto-battle many, many times. Boss battles can require a little more strategy though, or at least require you to make sure you have a healer routinely healing injured party members! The encounter rate for the random battles can also be really high sometimes, there have been a few occasions where I’ve finished a battle only to enter another battle 2 steps later. But even with the high encounter rate and being able to auto-battle my way through a lot of random encounters, it’s a strangely fun and satisfying system. Maybe it’s just the part of my brain that’s been wired to enjoy seeing numbers like experience and money go up in RPGs, but I’ve been enjoying it a lot!

Though it might not have the Press Turn battle system, what this first game in the series does have is the talk command. Just like in later Shin Megami Tensei games, you can talk with the demons you run into, and if negotiations go well, attempt to recruit them or ask them for money. It’s a surprisingly fun system, with enough different demon personalities to keep it from getting stale.

Another class MegaTen feature present in this game: demon fusion, which allows you to fuse 2 or 3 demons into a single new demon. They don’t inherit skills or anything like in other games, but it’s still fun to try different combinations and see what you’ll get. It is a little tedious though, because there’s no “fuse by result” option letting you pick the resulting demon you want based on the demons you have available. Instead, you have to try each combination manually, see what it would make, and then either accept it or back out and try a different combination. It’s not a deal breaker for me by any means, but definitely something they polished up and added quality of life enhancements to in future games.

The last bit of gameplay I want to mention are the dungeons. Like I noted earlier, you explore them in first-person, and I find it pretty charming to see first-person graphics running on the SNES like this. Visually, the dungeons are very basic. You don’t even see treasure chests until you’re standing on the same tile as them, but I don’t really mind the blandness of the environments. They’re fun to explore, and I’m playing with a patch that allows you to open the map with the press of a button (apparently you had to open a separate menu and pick the option originally, that sounds pretty annoying), so it’s been pretty easy to figure out the dungeon layouts and navigate them. Some of them can get pretty involved though, I’m glad this game has a built-in map!

I’ve done a little grinding to prepare for one boss, but for the most part I haven’t had to grind. I did end up doing some unintentional grinding by wandering with no idea where I was supposed to go once, I had to look up a guide at that point. For a game this age (and keeping in mind the English translation I’m using is fan-made and maybe some sacrifices had to be made to fit all the English text in), it’s alright at nudging you toward where you need to go next. The time I referred to a guide I had a rough idea where to go, but I hadn’t found the proper event trigger yet, and finding that is probably something that would have taken me a while without looking it up. I’ve really enjoyed the game so far. The story is quite good actually, I’m enjoying it even though I’ve already read about the plot and heard about it from YouTube videos on the game in the past. In the beginning of the game, I actually got 2 or 3 Game Overs very early on. At that point, I was thinking, “wow, this game is hard!” but that was because I hadn’t stopped at the shop in the mall and bought armor, so enemies were hurting me a lot. Once you do that and get a few demons recruited, it’s a lot easier though! 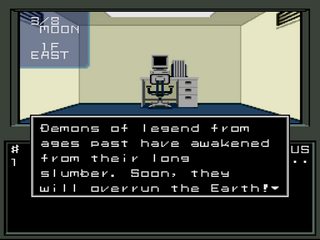 I won’t go into too much detail since this is a gaming blog, not a programming one, but I’ve actually started working on a ROM hack of my own for this game: one that replaces the music with potentially much higher quality MSU-1 audio. Basically, the MSU-1 allows the game to play CD quality audio, so you can do things like replace the soundtrack of an SNES game with the soundtrack of its PS1 port. That was my original intention in starting work on the ROM hack: allowing the game to be played in English with the PS1 OST. But honestly, the game doesn’t even really need an OST replacement - the original OST soundtrack sounds really good! I’m still going to keep working on the hack though, because that work has been fun too (and a massive learning experience), and oddly enough I think it’s made me enjoy playing the game more too, since I’ve gained a tiny bit of insight into how tiny pieces of the game itself work!