Spoiler-warning for Shin Megami Tensei: Digital Devil Saga 2! I spoil a few things from the second half of the game, as well as the final dungeon, final boss, and ending. Please skip that section if you don’t want to be spoiled!

The Axiom Verge section is spoiler-free.

I finished Digital Saga 2 this week, and with it, the Digital Devil Saga duology. All I can really say is: wow. The games are both really fun, and the finale of the 2nd one leaves a really strong impression!

Admittedly, with a number of Persona and Shin Megami Tensei series titles under my belt now, I was a little apprehensive of Digital Devil Saga going in. It doesn’t have the demon negotiation, recruitment, or fusion mechanics of the mainline Persona and Shin Megami Tensei titles, and I really enjoy that aspect of those series. While Digital Devil Saga lacks those elements, it makes up for this by featuring an incredible story, and strong characters. Maybe it’s because I drafted this up immediately after finishing the game, but I think these 2 games might have my favorite story of any MegaTen game I’ve played so far. Its soundtrack is also fantastic, and it might be my favorite Shin Megami Tensei OST (it’s so hard to choose though, they’re all great). 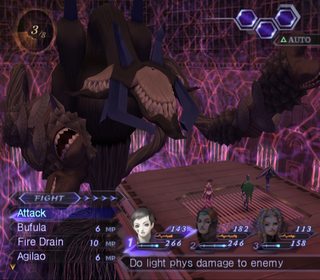 I really don’t even know where to start with what I played this week. There were some really tough boss encounters, and I’ll admit I cheesed my way through one of them a bit with save states, reloading to the beginning of a turn here or there to make sure I had the proper shield up to block the boss’s next elemental attack.

In the end, you end up fighting against God, because how else do you end a Shin Megami Tensei game, am I right? The scale of the final boss is fantastic, the camera is zoomed out pretty far and your party is so small in comparison. The fight itself wasn’t too bad. The boss has different phases, and in each phase it uses a different element, so as long as you have proper Drain skills at the ready, you can get the boss to lose the rest of it turn the first time it hits you with the current element. It still had some nasty tricks, like a spell that buffed itself while debuffing the entire party, but overall it wasn’t too bad. It was definitely cooler than the final boss of the first game, and more challenging, since you couldn’t make the fight drastically easier by using target all spells like you could with the final boss of Digital Devil Saga 1.

After defeating God in battle, its wrath is appeased, and the sun returns to normal. There’s a lot that happens with the main character at this point that I don’t fully understand. They seem to gain some sort of understanding of the universe and the nature of God. There might be some a reference to Buddhism or Hiduism there that I don’t understand, because the Digital Devil Saga games draw a lot of influence from those religions.

The final time of my playthrough was 19:48. All in all, I think the 2nd is the better of the two games, though that doesn’t really matter much since you have to play the 1st game to understand this one! They’re both really good though. I’m going to stop rambling about them now.

After playing nothing but Shin Megami Tensei RPGs the last month, I decided to take a short break before probably diving back into RPG land, and played through Axiom Verge, an indie metroidvania game. This game leans heavily towards the Metroid side of metroidvania, featuring a lot of elements inspired by the original NES game. The graphics are reminiscent of Metroid, with simple but effective pixel art that does an excellent job conveying the atmostphere of the strange alien planet on which the game is set.

Your primary weapon is a futuristic gun too, so combat feels similar to Metroid, though you don’t have missiles or any other kind of ammunition to worry about, save for with one late game weapon. Except for that late game upgrade, all your ammo is unlimited! You do get a lot of different types of projectiles though, giving you versatility in destroying the hostile lifeforms of the planet, whether they’re regular old enemies or gigantic bosses.

There is a pretty interesting plot as well. It starts off simply enough - after an accident in his lab on Earth, the protanist, a scientist named Trace, wakes up on a strange alien planet and hears a voice in his head that apparently belongs to some kind of sentient machine. This voice serves as your guide throughout the game (but in a very hands-off way). That’s the initial setup, and from there you’re off running. The plot isn’t dialogue heavy, mostly being conveyed through short dialogue sequences with optional journals you can find and read to potentially glean more backstory of the world and primary antagonist. The ones I found left me with more questions than answers though. There’s more to the plot than there appears at first glance, and I really enjoyed the way it developed.

A lot of the abilities you get in this game are unique within the genre. There’s some standard things, like unlocking a high jump that allows you to get new places. But then there’s things like the Remote Drone, which lets you spawn a little drone you can control and even move into different rooms to scout, or crawl through tight spaces Trace can’t navigate in order to hit a switch. It’s pretty cool you can take the drone into totally different rooms while Trace’s body stays behind, I didn’t expect that to be a feature! You also gain the ability to phase through 1 tile wide walls by running into them for a second. I can’t even imagine how difficult that made some of the level design, since you have to be careful the player can’t get themselves stuck somewhere they shouldn’t, but it works really well!

Axiom Verge was a really fun metroidvania romp through a great science fiction setting. It doesn’t overstay its welcome, with my final playtime clocking in at 6:32. Granted, I didn’t do a ton of backtracking to collect all the items, as my 58% item collection percentage will tell you, but the option is certainly there for those who seek 100% completion, and it probably wouldn’t even take that long. It’s worth noting that the game was developed by just one person: Tom Happ, which is super impressive!