The logical next step after finishing Digital Devil Saga 1: playing Digital Devil Saga 2, and that’s exactly what I started doing this week! It picks up right where the first game left off, with the opening animation showing a bit of how the cast of the first game was separated after going through the pillar of light in the Junkyard. Serph, Argilla, and Gale, find each other quickly, and you begin the game controlling the 3 of them as they explore an underground city and try to make sense of where they are and what’s going on.

Unfortunately, it seems what the group was told about Nirvana was a lie - the world they find themselves in now is anything but a paradise. The surface is a wasteland, and the sun has gone black, turning anyone its rays touch into stone. Those with the power to transform into demons are safe from its power, which includes the main party and also the soldiers of the Karma Society, the main antagonists of this game. The Karma Society refers to those who can turn into demons as Tuners, and they’re not too happy when Serph and friends show up with this power and begin fighting against them. Especially since Serph and his friends are also fighting to protect the ordinary humans of the underground city, who have become the primary food source of the Karma Society’s demonic soldiers. 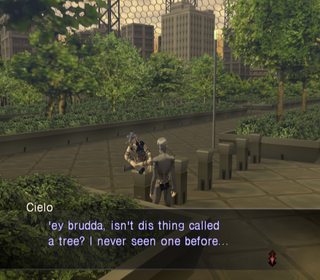 The story has already shed a lot of light and backstory on the events of the first game, but I won’t spoil that here. All I’ll say is it’s really good, even though I still don’t fully understand aspects of it. I’m hoping it will all become clear before the end though!

As for the gameplay, it’s unsurprisingly very similar to the first game. The 2 games did release only about 5 months apart in Japan. Still, there are a few adjustments and even quality of life improvements. The Mantra System is back, but instead of being displayed as a basic skill tree, it’s now represented as a hexagonal grid, and you can unlock some special sets of skills or permanent stat boosts for the party by mastering all the tiles around a locked tile.

There’s also the new Berserk Battle mechanic. When you get into a battle when the “solar noise” is high, something that increases and decreases as you walk around, your team may go into Berserk mode. This is when their demonic power overwhelms them, leaving them only half transformed, unable to cast spells, and with lower defense. But their attack power is way higher, and they deal a lot of critical hits. Winning a Berserk Battle results in a lot more experience gained. It’s not a radically game changing mechanic or anything, but it is kind of cool, and the extra experience is nice when it these battles trigger.

One especially memorable moment occurs in one of the early dungeons in the game. It’s a prison where humans are held and processed into food. The warden here is a powerful Tuner who transforms into the demon Kumbhanda. You’re told he’s really strong prior to ever meeting him, and then when you do meet him, a battle is triggered. He attacks you a bit, hitting you really hard but not killing you, and then just casts his unique Dark Bind skill on you to immobilize the team, capturing you and putting you in a cell. You’re broken out of jail almost immediately, but then the fun begins: the warden actually chases you down after you escape. Like, I wasn’t expecting him to actually run around the dungeon after me, but he does! If he catches you, you just get sent back to the jail cell and have to start the section over, but I found myself feeling really tense here, especially when I made it to my destination with the warden right on my tail. It was a really cool segment to see in a JRPG like this, it mixes up the gameplay in a unique way and helped keep things fresh.

That’s about it for Digital Devil Saga 2 for now. I’ve done many dungeons after that prison one, and those have been fun too, full of battles with familiar SMT demons as well as ones I had not seen before playing this game. I’ll probably give more thoughts on how the first and second games compare after I finish both, but I’d say they’re about equal gameplay-wise, and as far as narrative they’re also both strong, but in different ways. The first game is interesting because of the unique world, atmosphere, and sense of mystery, while the second game is interesting because of the characters and developing plot.