This is a game I’ve actually been playing on and off since late March. I was recording my entire playthrough, sometimes with commentary, and I only recorded about once a week, so finishing the game took a while. I finally finished it this week though, so it’s time to write about it!

I went in expecting a metroidvania to some extent, but Iconoclasts is actually much more of a puzzle platformer than a metroidvania. You play as Robin, a stun gun-toting, wrench-wielding mechanic living on her own after the recent death of her father. That’s actually the in-game reason for her being a silent protagonist - a character remarks at one point that since her dad died, she doesn’t talk much. She’s been helping fix things around her settlement to help people, but since she’s not actually a licensed mechanic, she’s breaking the law in doing so. The world within this game is pretty interesting, but I’ll get more into that later. Mostly, gameplay consists of exploring areas, fighting enemies who often have a specific vulnerability to figure out (sort of a mini-puzzle in itself), and solving environmental puzzles. These are sometimes really simple, like just finding the right nut to crank with your wrench to open a door, but sometimes more involved, like hitting a few switches in the proper sequence or stacking boxes to reach something. The puzzles are less like brain-teasers and more like platforming challenges.

One of my favorite things about metroidvanias is the utility gating, where you’ll see some sort of obstacle in an area that you can’t progress past yet because you haven’t found the proper upgrade. Things like double jump or wall jumps fall into this category. Iconoclasts has this in very limited amounts. The upgrades aren’t things you have to find, really. Most of the time you get them automatically at certain points of the story, or in the rare instances that you do have to collect the item yourself, it will be marked on your map. This is one of the reasons I’d say “metroidvania” isn’t a good fit for the game. On that note, you don’t really do much backtracking. There’s one segment where you do a little story-mandated backtracking, but other than that it feels mostly like going from one level to the next, though you do have the opportunity to go back to previous areas to get collectibles you missed. That’s the other thing I missed: collectibles like health or ammo upgrades. The only collectibles to be found are crafting materials, which you’ll find in optional chests scattered throughout the map. With these, you can craft tweaks that give you small boosts, like slightly increased movement speed, or the ability to dodge roll. None of these are required, and you could feasibly beat the game without ever crafting or using a single tweak if you wanted. I didn’t experiment with them a ton, I basically just found a loadout I liked midway through the game and stuck with it until the end. 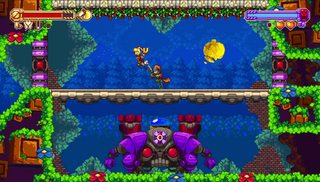 The boss battles in the game largely didn’t feel like metroidvania battles either. In a metroidvania, I feel like most bosses can be fought and defeated using whatever weapons and tools you have at your disposal. Bosses in Iconoclasts feel more like Zelda bosses, where the boss is like a mini-puzzle and you have to do dodge a few attacks before it exposes its weakness, then attack it, and the cycle repeats a few times. A lot of these boss battles were still fun, just not what I was expecting. That said, there were some late game bosses that were more like metroidvania bosses, and (mostly) relied on you dodging their attacks and attacking with whatever you wanted. Those were probably my favorite parts of the gameplay! I’m not including screenshots of them to avoid spoiling anything, but they were cool, and a lot of fun to fight.

Another highlight of the game for me were the characters and story. Both are brought to life through really great pixel art. Characters have numerous poses and animations that successfully bring emotion to the game’s cutscenes and dialogue, and even succeed at making the humorous moments legitimately amusing. I definitely laughed at a few moments here and there, especially some of Robin’s reactions to things. She may be silent, but her personality still shines through in how she reacts to some events.

Like I mentioned earlier, the world is also quite interesting. Their government is basically a religious dictatorship, where Mother, their leader, has psychic powers and is the mouthpiece of their god, who they refer to only as “He” most of the time. Breaking the law means suffering Penance, which seems to usually be public execution. Some of the enforcers of the law are the superhuman Agents, who, like Mother, can heal rapidly and live far longer than a normal human. They also have various abilities, like extraordinary strength, or laser vision. Not too far into the game, you learn that the agents have Ivory Blood - Ivory being the primary fuel source of the world’s technology. I thought the lore was cool, I really enjoyed that part of the game.

There are a few moments that I really struggled with (example: stealth-focused boss comes out of nowhere and those stealth mechanics are never revisited) and I just didn’t think worked very well, but luckily these were few and far between. All in all, I had a great time with Iconoclasts! My hope is to eventually release an entertaining video of my playthrough on YouTube, with highlights of and reactions to various bits of the game. I’ve barely begun editing it, and I don’t work on it very often, but maybe someday I’ll finish it! My final playtime was 09:22:04.01.

The Legend of Heroes: Trails in the Sky (PC)

I think I’m only a few hours away from finishing Trails in the Sky, so I’ll keep it brief in this week’s post. Assuming I finish the game next week, I’ll go more in-depth with my overall thoughts on it then. All I’ll say for now is, the story has picked up a lot in recent chapters, and I’m a lot more interested in it now than I was earlier. At this point, I’m assuming Joshua’s past is going to be left a mystery until later in the trilogy, which is a little annoying, but I’d love to be proven wrong. I mean, I think I have a pretty good guess as to what Joshua’s past involves, but the game is really dragging its feet with that reveal.