I only played The Legend of Heroes: Trails in the Sky last week, and my write up on it is spoiler-free.

The Legend of Heroes: Trails in the Sky (PC) 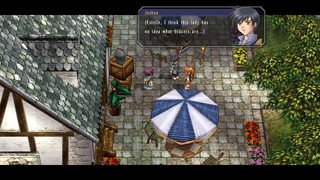 Bracers were mentioned in Trails of Cold Steel 1 and 2, and admittedly…I didn’t really get it. My reaction when hearing the term in those games was something like, “okay, is that supposed to mean something?” Well, had I played the Trails games in release order, the term would have most certainly carried more weight, because Trails in the Sky is all about Bracers. Estelle and Joshua become junior Bracers, and the majority of your allies are Bracers as well, so they’re really made out to be the heroes in Trails in the Sky. Fitting, given that their mission is to maintain peace and order, and help citizens the world over.

In terms of gameplay, Trails in the Sky and Trails of Cold Steel have a lot in common. There’s a shared core formula here: enter new region, main story advances, opportunity to do side quests, clear main dungeon, main story advances, repeat. I have to say though, the side quests feel much more natural in Trails in the Sky to me, because they’re literally jobs from the bulletin board in the Bracer’s Guild, whereas in Trails of Cold Steel they were either random things people wanted Rean to do or jobs from the Bracer’s Guild…but Rean wasn’t a Bracer so…I don’t remember why he had to do them? I digress. It’s a relaxing cycle, and pretty fun. The side quests are usually “kill this monster for me” or “get me this item,” so I haven’t bothered with them unless the main story is taking to the same area the side quest is in. I don’t want to get too sidetracked!

To give some context to the graphics, this was originally released for PSP before it was ported to PC. The environment is 3D, but the characters are pre-rendered 3D models. I think it’s a really charming art style, I like the isometric-ish perspective of it, where you can rotate the camera but not change the pitch. I also like how the important characters have 2D character portraits by their dialogue boxes when they’re speaking. I wish Trails of Cold Steel did the same thing, but instead ToCS puts a closeup of the actual 3D character model there, and I just find the 2D portraits of Trails in the Sky much more expressive and just better looking.

I’ve enjoyed what I’ve played of Trails in the Sky so far. The battle system is fun, the music is good, the plot and characters are mostly enjoyable when they’re not leaning too deeply into anime tropes. I’m only just beginning to see the benefits of the oft-touted Trails worldbuilding between the various series set in this world. For example, the characters sometimes mention the Erebonian Empire, which is where the Trails of Cold Steel games take place, and it’s kind of neat that I know a bit about Erebonia from playing a few Cold Steel games. But at the same time, it also makes me dread this series a bit, because there’s so much. Trails of Cold Steel 3 seems cool, but I think that a lot of its story builds upon the characters and events of the Trails in the Sky trilogy and the Crossbell duology. That’s 5 games that I would need to play just to be able to know all the characters and events referenced in Trails of Cold Steel 3. It’s intimidating, to say the least! Of course, I wouldn’t absolutely have to play all of those games. I could jump straight into Trails of Cold Steel 3, and just be missing some context and be confused about some things. It wouldn’t be the end of the world. But I don’t like to do things that way. All these games are also long JRPGs too, and I don’t want to devote all my time to playing them when there’s so many other games in my backlog I want to play too. I think my biggest takeaway is that due to my preference of jumping to different game series and genres after each game I play, I prefer series that feature mostly standalone games. Minor references to other games in the series are fine (like how there are subtle references to Persona 4 scattered throughout Persona 5), but with a series as long-running and lore-deep as Trails, I just don’t love that part of it. I guess that’s probably why I’m not really one to watch many TV shows either. This has been a long tangent, thanks for bearing with me! I plan on finishing Trails in the Sky, and probably even picking up the 2nd game in the trilogy eventually, provided I’m still interested when the first game ends (which I’m sure I will be, Falcom is pretty good at cliffhangers in my experience). No idea when I’ll ever get around to playing other arcs of the Trails series, but it will probably be years from now!