I’ve gotten much farther into the main story now, and the major players in the plot have been revealed. Dagda’s goals have also become a bit clearer. I’m not sure how many different endings or routes this game will have, but it seems like they will be pretty interesting! Personally, I’m probably just going to side with Nozomi whenever I have the chance.

On a random note, several demons have redrawn art or redesigns in Apocalypse. Notably, Lucifer has a new design, similar to his previous one but more intimidating. Medusa appears once more too, and though she has the same design, it’s been completely redrawn in a different pose and at a different angle, and I think it looks much better because of it. This art just seems like a lot more work went into perfecting it compared to Medusa’s art in the previous game. 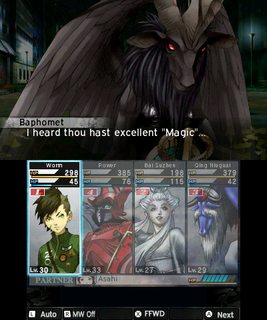 I’ve also come across several new types of interractions when talking with demons. Some of the dialogue options lead to skill checks where a demon will only join you if you have high enough stats. For example, I recruited a Baphomet who was impressed by my high magic stat. That sort of thing. They don’t seem to occur very often during demon conversations, but it’s cool when they do.

That’s about it for now. I’m still really enjoying SMT IV Apocalypse, the gameplay is more polished and refined than in the previous entry, and it makes it a lot easier to just pick up and play for a bit and have a good time.