Warning, there are significant spoilers for the 2nd half of Bravely Default, from chapter 5 onward. If you want to remain unspoiled for that game, please skip that section!

I finished Bravely Default this week. The endgame was pretty cool, and the ending itself was nice too, but I have very mixed feelings about the game as a whole, largely because of the portion of it I played through this week. 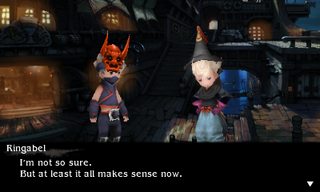 Here’s the thing about Bravely Default. Chapters 1 through 4 are great. The story is simple, but serviceable, the characters are endearing, and the gameplay is top notch RPG goodness. You find new towns, explore new dungeons, and fight new bosses. It’s a great time. But all that stops after chapter 4.

There’s virtually no difference in the gameplay in chapters 5 through 8. That’s not an exaggeration, you literally go through the same 4 dungeons and fight the same bosses 4 times in each chapter. Then you rinse and repeat in the next chapter, albeit with slightly stronger bosses. On Normal difficulty, I found these bosses to be extremely spongey, so I quickly switched to Easy mode for the remainder of the game. 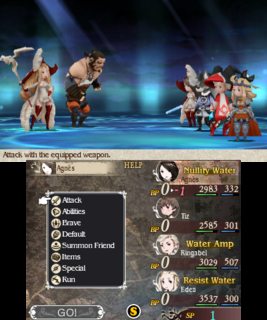 While the gameplay falls completely flat during chapters 5 through 8, the story becomes much more interesting. I’d say that’s the saving grace of the game at this point. If not for my interest in the story, and the 30+ hour time investment up to that point, I might have dropped my playthrough entirely. In some ways, I can kind of see what the developers were going for at this point. There’s an alternate/bad ending to the game, where you can basically quit out early, and I think these chapters were designed to make you want to take that path and end the game early rather than go for the true ending. I guess it’s a good way to do that, but I really question why they made the 2nd half of the game almost completely devoid of new dungeons and enemies.

I say almost because there are technically 2 new dungeons in the 2nd half of the game. The final dungeon, and an optional bonus dungeon right before that. That’s why I said earlier that the endgame was good - the game is actually fun again once the rewarding RPG gameplay loop is reintroduced in this RPG.

The job and battle systems in Bravely Default were great. I didn’t master them to the extent that Normal difficulty would have required me to. The 2nd half of the game is really intense on Normal, I’m definitely glad I switched to Easy. The 2nd to last boss gave me a ton of trouble even on Easy, I shudder to imagine what it’s like on Normal. If not for its 2nd half, I would absolutely recommend Bravely Default to RPG fans. As it is though, I would maybe recommend playing the first half of the game, but I wouldn’t recommend finishing it unless you have 8 or so hours to spend running through the same dungeons and boss fights. I’m glad I finished it, for what it’s worth, because I really don’t like to leave games unfinished if I can avoid it. Despite all my complaints though, I’m still interested in trying both Bravely Second, the sequel, and the upcoming Bravely Default II, another sequel!

I started this sequel (of sorts) to Shin Megami Tensei IV. I say it’s sort of a sequel, because it takes place concurrently with the first game’s Neutral route, but in an alternate timeline where some details differ. You play as Nanashi, a teenager living in Tokyo, as Flynn (the hero of the first game) is fighting to protect the people of Tokyo from the warring armies of angels and demons lead by Merkabah and Lucifer respectively.

Nanashi is the adoptive brother of Asahi, and both have dreams of becoming full-fledged Hunters with the Hunter Association. Well, I guess since Nanashi is the player-character you can technically be pretty neutral to the idea of becoming a Hunter. Anyway, the two help out the Hunters whenever they can. On a routine food scavenging run, they and two Hunters are accosted by a group of demons from Lucifer’s army. Hungry demons. The 2 Hunters give their lives to protect Nanashi and Asahi, but they’re unable to defeat the demons. Effortlessly, the leader of the group, Adramalech, kills Nanashi. By some twist of fate, Nanashi is contacted by Dagda, God of Knowledge, in the afterlife. Dagda and Nanashi strike a deal: Nanashi will be brought back to life to be Dadga’s own personal puppet. Once again among the living, Nanashi is just in time to fight off the demons, protecting Asahi. Wanting to avenge the Hunters who died protecting them, the two speak to Asahi’s father, and finally get him to make them official Hunters. As Hunters, their adventure is just beginning, and Dagda’s reasons for making a deal with Nanashi remain mysterious as ever…

Gameplay-wise, this game plays very similarly to SMT IV, but with some nice improvements and a few changes here and there. Like in SMT IV, in addition to your main party of demons you will frequently have human allies fight alongside you in battle, controlled by the AI. In Apocalypse, when you have more than 1 ally, you get to choose which one you want to accompany you in battle. Your allies also gain experience after battle and level up alongside you, learning new skills as they do. All your allies can also team up to deliver united Assist Attacks in battle after they deliver enough regular attacks, and this completely cancels the enemy’s turn when it triggers, which can be a big help in battle!

Unsurprisingly given my history with Persona and SMT IV, I’m really enjoying the demon fusion system. The exploration and dungeon crawling are great as well, it’s particularly nice how barriers are marked on the map in this game, including the side you must attack them from to destroy them. There’s also more direction on where you need to go to advance the main quest, which is pretty nice and a lot more modern-feeling than the first game’s approach. I’ll probably go more in depth about some of the changes next week, after I’ve experienced more of the game. I’m definitely looking forward to getting further in!