I collected all fruit in Story mode! This was surprisingly easy. For most areas, I’d only missed 2 or 3 pieces of fruit, but even in the area where I was missing 11 pieces, I was able to get the rest of the fruit in that area in just 2 days I think. I lost some Pikmin along the way of course, but I have so many now that even losing 50 of them is no big deal…though it is still sad.

In Mission mode, I branched out and tried several Collect Treasure missions and a Fight Bosses one too. Some of the Collect Treasure missions include Purple and White Pikmin originally introduced in Pikmin 2! It was nice to see them included in this game, since they’re absent from Story mode, although since they’re not really the focus of the game their specific talents are pretty underutilized. In Pikmin 2, you’d have objects that required, for instance, 150 Pikmin to carry, and you’d have to use Purple Pikmin to get around the 100 Pikmin limit since they have 10 carry strength. Either way, it’s cool that they’re at least in the game.

Viewtiful Joe is a side-scrolling beat ‘em up on the GameCube, developed by a team at Capcom, many members of which would later go on to found PlatinumGames. In that regard, there are some similarities in design between Viewtiful Joe and PlatinumGames’s Bayonetta. Namely, challenging combat with a high skill ceiling! The cel-shaded visuals look really good, and hold up very well too. I played through it this week and really enjoyed it overall, with some caveats.

Joe is an ordinary guy who is obsessed with action movies. One day, he and his girlfriend Sylvia are at a movie theater watching an old action film starring the superhero, Captain Blue. Suddenly, the villain in the movie defeats Captain Blue, reaches out of the screen, and kidnaps Sylvia! Joe is pulled into the movie screen shortly after, where he hears the voice of Captain Blue’s spirit. Joe is entrusted with a V-Watch that allows him to transform into an action hero. It’s up to Joe to defeat the bad guys of Movieland and rescue Sylvia!

VFX powers are what makes the combat in Viewtiful Joe distinct from other beat ‘em ups. With the power of special effects, Joe has the power to slow down time, speed up time, or zoom in to focus on himself and show off his killer moves. All of these powers drain his VFX gauge, and if it reaches empty he’ll revert back to his much less powerful ordinary Joe form. The bar recharges when powers aren’t in use, and once it recharges back up to a certain level he’ll automatically transform back into his superhero form. 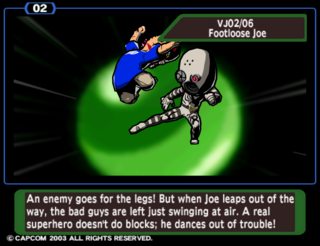 Dodging enemy attacks is also a core part of combat. Before some enemy attacks, you’ll get an indicator of whether the attack will be high or low. This allows you to dodge accordingly if you react quickly enough. Dodging an enemy attack makes them vulnerable, allowing you to deal serious damage by delivering a slow-mo punch. The in-game tutorials teach you the basics, but had to play for myself to really begin to understand the flow of combat.

Another aspect of Viewtiful Joe that reminds me of Bayonetta is the level structure and ratings. You’ll get a rating based on your performance in each part of a level, which is very similar to how the rankings in Bayonetta worked as well. “V” is the best ranking, and I think “C,” which stands for “Craaappy” is the worst. I definitely got a few C rankings as I got used to the mechanics and struggled with certain parts! At the end of a level, you get an overview of all your rankings through each part, and an overall level score - again, just like Bayonetta.

I suppose this is a good time to clarify that I played through the game using Dolphin, a GameCube emulator. Just under halfway through the game, I began using save states pretty heavily in some spots, particularly the boss battles. Normally, if you run out of lives you have to restart the section from the beginning. I started dying a lot at the halfway point, so I made the decision to make a save state whenever I cleared a difficult hurdle to I could quickly restart from that point when I inevitably died trying to overcome the next challenge. Using save states like this might invalidate my playthrough, but it made the experience way more enjoyable for me and probably saved a ton of time. Aside from that, the only other part of the game I struggled with was a few of the puzzles. Some of the puzzles in the first half of the game really slowed down the action, dragging it down a bit. In the latter half, I was using a guide to figure some things, and that definitely helped, but those sections also had enemies and hazards to deal with during the puzzle sections as well, which kept things interesting.

Thematically, Viewtiful Joe plays upon a lot of action movie tropes, and has a lot of movie-related puns too. Joe’s VFX powers are a good example of this, going slo-mo to dodge bullets and deliver slow motion punches are ideas straight out of an action movie. I probably missed a lot of references since I’m not much of a movie buff myself, but I definitely picked up on heavy Star Wars references during one section, and those were pretty amusing!

After the credits, there’s also a fun black and white music video, where Joe raps in Japanese while enemies and bosses play instruments in the backup band. This took me by surprise, but fit in perfectly with the game’s tone, and totally felt like something you might see after the credits of a movie - a lot like how Will Smith raps with aliens in Men in Black (it might even be a direct reference to that for all I know).

Anyway, once I learned the ropes a bit and settled into the use of save states and using a guide, I had a lot of fun with Viewtiful Joe! I was playing on “Adults” difficulty, which is the Normal difficulty option. “Kids” (Easy) might have been a better choice for my first playthrough, but I made it work. After completing the game, you unlock “V-Rated” difficulty, which is the Hard mode, and I think if you complete the game on V-Rated you unlock Ultra V-Rated, which is an even more difficult experience. I don’t see myself ever rising to the challenge of either mode, but it’s really cool the developers included difficulties like that for players that really master the mechanics.