There are some very minor spoilers for Life is Strange 2 episodes 3-5. If you want to totally avoid all potential spoilers so you can play these games yourself in a blind run, you shouldn’t continue reading! Click a title to skip to that section. Games contained within this post:

I played through this challenging and unique metroidvania this week. Set in the dream-like world of The Salt, you play as Dandara, a warrior determined to free The Salt from Eldar and its army. I didn’t know until after beating it, but the game takes some inspiration from Brazilian mythology, and Dandara is even based on an Afro-Brazilian warrior of the same name from 17th century Brazil. The world design is notably different right out of the gate. For one, there’s no concept of gravity here. You leap from surface to surface, but in any given room there’s not really a clear floor or ceiling. Some rooms also rotate as you move through them, further disintegrating the idea of a fixed floor or ceiling. All this makes for incredibly unique platforming and level design.

It’s hard to properly describe movement in Dandara, so instead here’s a short gameplay clip. As a side note, part of the reason movement is like this is because the game is also available on mobile, and the developers wanted a movement system that would work on both touch-based devices and with gamepads. In the end, this is what we got, and I’d say the movement system turned out quite well!

There’s plenty of non-guided exploration. You don’t really have much direction of where to go at any given point, and instead have to study your map carefully and figure out where you haven’t explored yet. As you find more upgrades, new paths will become open to you. I got lost from time to time when I felt like I’d explored every possible area. In one case, I had missed an upgrade that I thought was optional. When I got it, I didn’t see how the new ability would open up new areas, and had to look up a guide to figure out how to advance.

There are some pretty cool boss fights sprinkled throughout the experience. I kind of wish there were more, actually. During my playthrough, there was a huge span of time between boss fights in the latter half. After I finished the game, I learned that this was because a lot of my playtime was spent in the new content added by the free Trials of Fear update. Dandara originally released in 2018, but received a large free update in 2020 that added a bunch of new content and added the “Trials of Fear” subtitle. This content update only adds 1 or 2 true boss fights though. Otherwise, it consists of new areas, mini-boss type fights, platforming challenges, and enemy rush arenas…all of which are tough! I thought Dandara was just a really hard game, but after finishing it, I realize that it’s mostly the Trials of Fear content that is intensely difficult. I died numerous times to the challenges and bosses of Trials of Fear, all because I thought I had to defeat them to beat the game, when really I only had to defeat them to get the new ending added in the Trials of Fear update. In the end, I’m glad I got the true ending, but had I known there was an easier ending…I might have given up on the Trials of Fear challenges and just gone for the original ending. Instead, I spent quite a bit of rage-inducing time overcoming the Trials of Fear.

Overall, Dandara was a great game. The first third or maybe first half was really solid. Around that point is when you unlock the new Trials of Fear areas. Because I didn’t know those areas were newly added in Trials of Fear, I assumed they were required, and I feel like I wasted a lot of time wandering around in the new areas because I didn’t know how to advance. Had I known that content was new, I probably would have waited to try exploring it until after I had more abilities, since you need some of the main game’s abilities to explore parts of it. I also probably would have had a much easier time with the challenges here if I’d gone back to it after getting more health. Part of the reason for Trials of Fear’s difficulty might also be because Dandara plays so differently from other metroidvanias. The way you move by leaping from surface to surface instead of walking and jumping like in other 2D games takes a bit to get used to, and I’m nowhere near as good at it since the skills I’ve built up playing games like Super Metroid or Hollow Knight don’t directly apply here. I would definitely recommend Dandara to metroidvania fans looking for something different, but it’s probably not the best entrypoint to the genre for the same reason. It was a really remarkable experience though!

PatronusLight and I finished Life is Strange 2 this week, finishing the final three episodes. 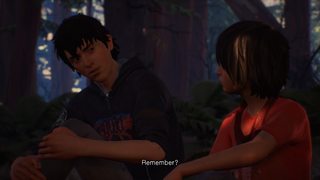 Episode 3 was probably the high point of the game for me. Right off the bat, it surprised me by featuring several licensed songs, with the opening set to “Melancholy Hill” by Gorrilaz. Aside from that, it also featured quite a few choices, and had some cool moments between Sean and Daniel as well. There also wasn’t a lot of filler in it. There were basically no moments where I felt bored…except maybe during the marijuana trimming mini-game, which went on for a bit long. PatronusLight was disappointed that I didn’t let Sean get a tattoo, but getting a homemade tattoo from a hippie in the middle of the woods just sounds like a bad idea.

I think the choices are actually written better in Life is Strange 2 than the 1st game. The first game was criticized for having only 2 endings, and your choices along the way don’t really matter in that one. In Life is Strange 2, this is definitely improved, as there seem to be more possible endings which your choices throughout the other episodes actually influence. But Life is Strange 1 is still probably my favorite between the two, simply because the mechanic where you could rewind time at will was really cool. I haven’t played the first game in so long though, so I might just be biased!