Spoiler warning for Dragon Quest VIII! I spoil the end of the game, and the final boss.

The sections on The Mummy Demastered and Mega Man Battle Network are spoiler-free.

My epic journey came to an end this week as I finally finished Dragon Quest VIII! After some wandering around, I stumbled upon the next place I needed to go for the main quest, a town where humans, elves, and monsters lived together in harmony. In this town, people weren’t afraid of King Trode’s monstrous appearance, since many of the townsfolk themselves were monsters. Therefore, this is the one town in the game where you control King Trode whenever you enter the area, which was a pretty cool touch.

A few boss fights later, and I’d finally made it to the final dungeon - the Black Citadel. This dungeon was quite large, but well worth exploring since it contained some nice treasures, like rare Orichalcum that later came in handy to create powerful weapons and armor using Alchemy. I died to the boss of this dungeon twice, I think, before finally besting them. Even though this was the last dungeon, it was not the end of the game though.

After that dungeon, you have to go on a fetch quest, backtracking to locations you visited throughout your entire journey. This probably sounds tedious, and I’ll admit that there wasn’t really much of a point to this. It was kind of cool revisiting several areas and getting a reminder of each step of the journey so far, and thanks to the Zoom spell it didn’t take long at all to fetch the items, so I didn’t mind this part really. With this part out of the way, it was time to fight the real final boss: Rhapthorne. This final boss was tough. I died 2 or 3 times before deciding to grind up a bit, and even after grinding my team up about 5 or 6 levels to an average level of 45, I still died twice before I was able to defeat this boss. He got 2 attacks per turn, and basically all his attacks did a lot of damage. Finally defeating him was a great feeling, which was probably the point in designing the fight this way!

With Rhapthorne defeated, King Trode and Princess Medea are finally restored to their original forms. This is the first time we’ve seen King Trode’s human form, and the reveal is pretty comical as his face looks essentially the same as when he was a troll. With their task complete, the party celebrates with the royal family at the restored Castle Trodain, and afterward the credits roll. There’s a post credits gameplay sequence though!

After the credits, there’s a time jump of a few months. The Hero has returned to his duties as a palace guard at Trodain Castle, and your party members are reuniting for a special occasion: they must escort Princess Medea to her wedding with Prince Charmles, of the kingdom Argonia. Her engagement to Charmles due to an arranged marriage was mentioned quite a bit earlier in the story, so I was glad to see it being addressed and wrapped up here. After escorting her to the cathedral where she is to be married, Medea runs away from her own wedding, not wanting to spend the rest of her life unhappily married to Princes Charmles. The Hero catches up to her as she flees, and she asks him to run away with her. You can choose Yes or No here…I’m not sure what happens if you pick No, but I of course picked Yes, and the Hero and Medea run away back to Castle Trodain together. Their future is left up to your interpretation, but I like to think they married eventually. From reading a walkthrough, I know there’s some post-game content and another ending, so maybe that expands upon this ending, but I’m feeling content with how things ended up here.

I really enjoyed Dragon Quest VIII. It’s an absolutely wonderful realization of the classic JRPG formula. Despite some challenging bosses, I’d say the gameplay is very player-friendly overall, though you may have to do some grinding from time to time. There’s also a lot of side content. I didn’t do a whole lot of that in my playthrough, and because of that I know there’s a party member that I never even got in my party! This amount of side content really gives you a lot of options, and I always love to see that in games. That about wraps up my thoughts on Dragon Quest VIII. I’m definitely going to be checking out more of the series eventually, but I don’t know if I’ll move forward in the series and play XI or go backward and play one of the earlier games.

After Dragon Quest, I was looking for something shorter to play. I decided to play through WayForward’s The Mummy Demastered. It’s a licensed game based on the 2017 reboot movie, The Mummy. I’m interested that movie, but I picked up the game for 2 reasons: WayForward does great work, and it’s a metroidvania! More licensed games should be 2D pixel art metroidvanias if you ask me! Anyway, this one plays kind of like a Metroid game in that your main weapons are guns. You have unlimited ammo in your machine gun, but you can also find and use up to 2 secondary guns at a time and those have limited ammo. 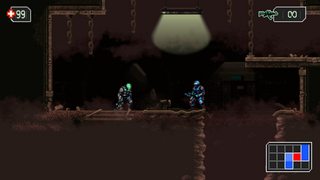 One of the interesting aspects of this game is that you don’t necessarily play as a single character the whole time. You play as unnamed agents of Prodigium, some kind of secret agency devoted to fighting monsters. Your goal is to defeat the recently awakened Princess Ahmanet, who basically wants to destroy everything and kill everyone. If you die, your corpse is reanimated by Ahmanet’s magic, and you then take control of a new Prodigium agent. The catch is, this new agent doesn’t have any of the gear you may have picked up as the previous agent, so you have to hunt down your predecessor’s reanimated corpse and defeat it to reacquire your stuff. The Prodigium zombies you leave behind when you die will naturally fight against you with whatever gear you had equipped when you died. They’ll use the gun you were using, as well as your equipped grenades. The whole concept is very similar to Shades in Hollow Knight.

The pixel art here is fantastic, with some really nice looking pixel art backgrounds. The music was really nice too, filled with a lot of awesome, deep synth bass. The map was fun to explore too, with several different areas featuring different visuals and music. There are plenty of collectibles hidden around, like max health upgrades, max ammo capacity upgrades, and of course required upgrades that give you new traversal abilities, allowing you to explore more of the map and progress onward.

Really the only complaint I have is that the traversal abilities felt underutilized. There are some standard upgrades, like high jump, and the ability to move freely in water. The most unique upgrade The Mummy Demastered brings to the table is this cool phase dash ability, where you can dash a short distance in any of the 8 fixed directions. This kind of serves as a double jump since you can use it in midair. Unfortunately, you don’t get this ability until near the end of the game, so there’s not a lot of time to use it. The big reason there aren’t more abilities is probably that the game is quite short - my playthrough was over in just under 3 hours, so there’s really not a lot of room to add new abilities within that time unless you force a new concept onto the player every few minutes.

Oh, before I forget to mention them, the bosses were pretty cool. There’s only a few of them, but they’re all quite impressive visually and offer up challenging fights. After most of the fights, I barely had any health left! Each one was challenging, but learning their attack patterns and how to dodge them was pleasantly satisfying.

That’s The Mummy Demastered in a nutshell. It’s a solid metroidvania, and I’d definitely recommend it to fans of the genre looking for a new one to play.

This is an action RPG with deck-building mechanics for GBA. The concept sounded promising, and it was fun at first, but certain elements of the game really wore on me and in the end I decided to give up on this one.

The story takes place in the future, where society has developed to become increasingly interconnected and reliant on the Net, which I assume is short for Internet. Due to this, cyber criminals have more power than ever before, and viruses and such run rampant on the Net. To combat that, lots of people wear PETs, personal terminal systems, on their wrists, featuring AI called NetNavi on them. The protagonist Lan has a PET, and his NetNavi is also his best friend: MegaMan.EXE. These NetNavi can enter the Net and fight viruses, and this is so important that even elementary school children like Lan are taught how to do this in school.

The battle system here is quite cool. It plays out on a 3x6 grid. At the start, you pick cards with matching types or letters from your hand, and you’ll be able to use the abilities on the cards during the next round. You can also fire your blaster freely during each round, but that doesn’t do as much damage as card abilities. After enough time passes in the round, you can pause the action to draw another set of cards, and the cycle repeats until you’ve defeated all the enemies.

Where the game lost me is primarily two things: 1, battles take place via random encounters and there’s no way to decrease the encounter rate, and 2, the dungeons. It’s pretty easy to get lost in the dungeon maps if you’re not paying close attention, since they basically consist of identical pathways and a scrolling background image. I was persevering through them until I reached a dungeon where a large part of it consisted of traversing invisible pathways in order to reach your goal. I could have followed a guide to continue through it, but at that point I just decided it wasn’t worth it.

It’s unfortunate that Mega Man Battle Network wasn’t a great fit for me. I really liked the isometric graphics, setting, and battle system, but the negatives soured the experience a bit too much for my taste.