I didn’t spend as much time playing Dragon Quest this week, but I still made some progress. This included fighting against a ghost pirate boss, and afterward I surprisingly got a new party member, Red. Red was involved earlier in the plot as a side character, but I was surprised to see her come back at this point and join the party. Apparently this is a new feature in the 3DS version, in the PS2 original she didn’t join the party. 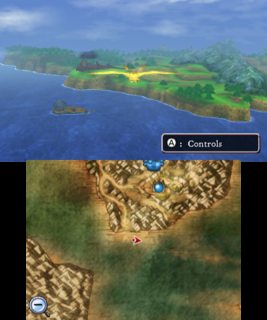 I made it far enough in the main story to gain the ability to fly around the world map! Presumably this opens up more new areas to explore, but I’ve only found one so far. I thought that place was where I would have to go next to advance the main story, and there was a cutscene when I first went there…but afterward I couldn’t find anything there to advance the plot. I have an idea now of where to try going next, but for a while I was just sort of flying around the world map randomly and landing in spots I thought were interesting to see if I would find anything there.

I also did a side quest that I thought was maybe the main plot…but after finishing it, I’m pretty sure it wasn’t. It was still fun though, it involved a dungeon with lots of dragon skeletons.

This is the main reason I didn’t play much Dragon Quest over the past week. I was hooked on this visual novel/puzzle game! Part of the Zero Escape series, “The Nonary Games” is a collection of 2 games in the series. The first is the one I played through this week, Nine Hours, Nine Persons, Nine Doors. Originally a Nintendo DS game, it’s been remastered for modern platforms in this collection, and that’s the version I played through this week.

As primarily a visual novel, this game is mostly dialogue, with branching paths and multiple endings depending on your choices. The premise is super interesting. College student Junpei wakes up locked in a room on an old cruise ship, with a strange bracelet locked on his wrist. Shortly after he wakes, the glass on the window breaks, and water begins pouring into the room. With the water level rising fast, the player must control Junpei and solve the puzzle in this escape room scenario. Junpei’s life depends on it! You’re actually not timed at any point in the game though, so despite the rushing water you can take as long as you need to solve the puzzle. I was stumped on this one for a bit, until I searched the room more and realized I hadn’t found all the necessary clues to escape. Once I found all the clues needed, I was able to escape without any issue, and that helped me realize that the solutions to the puzzles were never anything too obtuse. If something didn’t make sense, chances are I just hadn’t found all the clues yet.

After escaping, Junpei soon runs into others on the ship in his same predicament. They all have numbered bracelets on their wrists as well. Like Junpei, they remember being gassed by some kind of smoke grenade, and seeing a strange figure in a gas mask before they lost consciousness and woke up on the ship. That figure soon speaks to them over the ship’s intercom, announcing themselves as “Zero,” the captain of this ship, and explaining that they are now part of a life and death game - the Nonary Game. The group has 9 hours before the ship sinks. They must make their way through a series of numbered doors. The 9 door is the exit - that’s their goal.

Furthermore, opening a numbered door has several rules. Only 3-5 people may go through a numbered door, and they must scan their bracelets at an authentication device by the door called a RED. Once they’ve scanned in, they pull the lever on the device, and if the digital root of the entered numbers matches the number on the door, it will open. Then they have 9 seconds before the door closes, and only those who authenticated can pass through the door. Once inside the door, the detonator in their bracelets activates, and they have only 81 seconds to find another scanning device, this one called the DEAD, and authenticate their bracelets there to deactivate the detonator in their bracelets. Everyone who passed through the door must authenticate at the DEAD to deactivate the detonator, otherwise it will go off - and cause the bomb within their digestive system to explode.

With those rules in mind, the group gradually moves through the numbered doors they encounter. At several junctions, you’ll have to choose which door you want to pass through, with branches in the story occurring at several points. While the story branches rejoin early on, towards the end there are several different branches depending on your choices, and each of these lead towards one of the several endings. Past each of the numbered doors, there are usually 1 or more escape room situations, and this is where the puzzle gameplay comes in. Like with the initial “escape the flooding cabin room” situation, you’ll have to examine your surroundings to find clues and items, sometimes combining items or solving puzzles to advance. Some of the later puzzles were pretty difficult, at least for me. One has you solving a magic square, and I spent a bit of time trial-and-erroring my way through that one.

A note on the graphics, the entire game plays out over pre-rendered backgrounds, which I always enjoy. Pre-rendered backgrounds have this nostalgic feel, and I love it. The character sprites look pretty nice too, and each of them has at least one surprisingly fluid animation. Aside from the animations, all character sprites have several different poses, which combined with the voice acting keeps things interesting.

I won’t spoil any of plot, or any of the endings, but I just want to say…wow. This plot is pretty incredible. Each ending I saw left me curious what the other endings might be, and eventually I found my way to the true ending and everything comes together really nicely. Just an awesome story all around. It’s full of mystery, sci-fi goodness, and just the right amount of suspense and eeriness. I’m really looking forward to playing the next game in the Nonary Games collection, Zero Escape: Virtue’s Last Reward next! For now, I’ll leave you with the music that plays when you get one of the several Bad Endings in this game. I was really impressed with this track. The way it complements whatever bad ending you just saw is perfect…but I admit that it probably won’t have the same effect listening out of context!