Everything this week is spoiler-free!

I don’t really have anything to report for this one. I played it for a bit this week but (surprisingly) didn’t take many screenshots. It’s a really nice game to chill out and play for a bit. I learned how to meet with the Harvest Goddess from a tips video on YouTube, that was pretty neat. Apparently you just have to throw offerings into her spring. If you give her enough gifts she gives you several rewards, but I haven’t gotten to that point yet. Also, some of the character sprites are rather…uh…expressive!

The road to the credits of Radiant Historia: Perfect Chronology was a long one, but I finally did it! That might make it seem like I was growing tired of this game, but that’s not true. I really enjoyed Radiant Historia, though it was sometimes tedious and a bit frustrating.

What surprised me about “finishing the game” is that in Perfect Chronology, you don’t get a credits sequence after beating the original story. At that point, since I was playing in Append Mode, the new story content added in Perfect Chronology was unlocked. As far as I can tell, beating that new story content is the only way to get to the credits of the game, which is something I wanted to do to feel like I really finished the game. Except at that point, I was content with the story’s conclusion. Had the credits rolled then, I probably would have stopped playing and considered my playthrough complete. But there were no credits there, and I was curious to see how the new story content would pan out, so I continued playing.

The new content focuses on a new character, Nemesia. If I had elected to play the game in “Perfect Mode,” rather than Append Mode, her new scenes and the new gameplay elements would have happened as I played through the game. In Append Mode, they’re instead summarized after you complete the original story. It was nice seeing where they fit into the original plot, but I can definitely see why Append Mode is the recommended setting for players who haven’t played Radiant Historia. The plot of the base game is really good, and having the few Nemesia scenes interrupt it would have been an unnecessary distraction.

Anyway, the main gameplay loop added in Perfect Chronology is retrieving Artifacts for Nemesia from across various “possible worlds,” which are like parallel timelines to the ones Stocke has been exploring thus far. Gameplay-wise, Nemesia has a mission board that you accept missions from and complete them for rewards. Each one results in Stocke traveling to some alternate world where events played out slightly differently from his timelines and retrieving an Artifact for Nemesia. Sometimes you’ll encounter roadblocks and need to travel to some point in time in one of the Stocke’s original timelines in order to get an item or something to advance. Sometimes you just have to fight an enemy. None of the missions involve much exploring or anything like that, they’re pretty short and focused.

The problem with playing these missions in Append Mode is that the difficulty of them is balanced assuming you’d play them as you progress through the main story, so any I fought with my team during these missions were really easy. Playing the missions like this in Append Mode wasn’t particularly compelling. Luckily, to get the ending of the game you only need to do the ones marked with a key, although completing all of them is required for one of the game’s endings, but I’m not going for that one at this time. Some of the scenarios of the possible worlds were sort of interesting, but none of it comes close to how gripping the main story is. 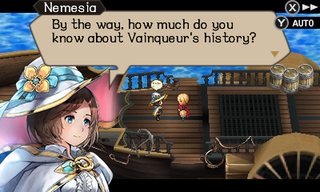 Nemesia provides more backstory on the history of the world as you complete Artifact missions, and eventually you unlock a new dungeon that leads to the new ending. This part was done really well. It’s a little rushed compared to how you learn about the world in the original story, but the details tie everything together nicely, and fill in some questions I’d had in the back of my mind after the original ending. The second to last boss battle of this final dungeon was really intense. It hit my team really hard with strong magic attacks that could paralyze the whole party if I was unlucky. That was pretty nasty, but once I figured out it was weak to magic I was able to defeat it pretty easily. The 5 game overs it took to realize that were a bit frustrating though.

All in all, Radiant Historia: Perfect Chronology is a fantastic game. Most of its strongest story moments are in roughly the first half of the game. After that the story is still quite good, but everything before that is just fantastic. The endings require completing all the “key” side quests, and some of these are hard to find. Without using a guide, I probably never would have found out how to start one of them. The battle system is awesome, I never got tired of it. Even when getting completely obliterated by difficult bosses, the battle system is so good that I wanted to keep playing, and figure out a way to use it more effectively. That about wraps up my final thoughts on Radiant Historia. It has its flaws, but I think it’s an absolute treasure even so!