For Resident Evil 4, I spoil some of the scares from chapter 3 onward. So if you want to avoid Resident Evil 4 spoilers, probably skip that section! The rest is spoiler-free.

lick a title to skip to that section. Games contained within this post:

I finished Resident Evil 4 this week! Last week I had boasted that I never ran low on ammo, and had plenty of inventory space. Well, both of those statements were much less true in my playtime this week! I ran very low on ammo, running out entirely for some of my guns at some points, and my inventory was close to full a few times too.

There were a variety of interesting gameplay segments in the remainder of the game. Aside from gameplay staples like boss battles, there was also a short section where you play as Ashley after her and Leon get separated. This was interesting because Ashley doesn’t carry any weapons, so you can’t fight off enemies very easily. Running from enemies was pretty much my only option as Ashley, and that made for a tense atmosphere! 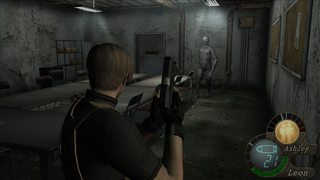 Speaking of tense atmospheres, in the final act of the game a new kind of enemy is introduced: the Regenerador. These things were terrifying. They have a sort of jump-scare introduction, but it’s every else about them that really inspires terror. The way their limbs quickly grow back after being shot off, their slow, deliberate stride towards you, but above all their loud, rattling breathing. Hearing them breathing when I entered an area but not yet being able to see them always put me on edge. Defeating one always took me a ton of ammo, so I mostly ran from them unless I was forced to defeat them. The game hinted that there was a thermal scope or something you could get that would allow you to see their weak points and defeat them efficiently, but I never found that. Maybe it’s a New Game+ feature.

I liked the design of the final boss, but it was incredibly easy to defeat. Maybe that was only because I had an RPG on-hand that I blasted it with, ending its first phase very quickly. I didn’t mind the easy boss battle though. It was sort of a nice reprieve from all the tense, stressful situations I had to overcome to make it to that point! After defeating him, you have to escape with Ashley before a bunch of explosives go off, and again this was pretty easy. Afterward, Leon and Ashley are finally free, and the credits roll!

There were some pretty difficult parts, and in the end I died a total of 36 times during my playthrough. Probably a few more actually from the times I died and quit instead of retrying from a checkpoint. It was a worthwhile experience though. I was truly afraid during portions of the game, and other times felt like a real badass taking down enemies as Leon. After completing the game once, you unlock several side story campaigns, such as Separate Ways which I believe provides some additional context to the plot. I’m not sure how long each of these is, but they seem pretty neat. I’ll probably revisit Resident Evil 4 to play at least one of them eventually, but for now I need to play something less frightening!

I played through this pretty cool indie stealth action game, similar to Dishonored in some ways. You control Aragami, a shadowy spirit warrior summoned by Yamiko. Yamiko is imprisoned by the Kaiho, and summoned Aragami so that he could free her.

Shadows play a huge role in this game. Aside from their usual purpose in stealth games by making you more difficult to spot, in Aragami standing in shadow also refills your Shadow Essence. Shadow Essence is required to make use of abilities like Shadow Leap. This skill allows you to teleport into nearby shadows, even if you’re not currently standing in shadow yourself. It’s an integral part of getting around, as it allows you to move from shadow to shadow to avoid detection, and also helps you get onto higher ground and through windows. It has a limited range to balance things out and keep it from being too overpowered, but it’s still incredibly useful.

It seems like the devs must have drawn inspiration from Dishonored, among other games. I got Dishonored vibes from the level design from time to time. One way in which it’s decidedly unlike Dishonored is that you die in one hit from an enemy. Whereas Dishonored can be played loud and you can enter combat head-on if you really want, in Aragami stealth is essential because you are frail in direct combat. I found it better to avoid detection, and pick off enemies one by one.

One of the last few missions was really tough. The game uses an automatic checkpoint system where if you die you’ll reset to the last checkpoint, but on this mission the checkpoints were pretty far apart, so I ended up replaying large parts of it time after time because I kept getting smoked by an enemy archer. Other than this though, it wasn’t too difficult, and I can forgive the difficulty spike because it was pretty close to the end of the game. The music was also pretty awesome at that point, and that made me want to keep going! If you’re looking for something kind of like Dishonored, Aragami is worth a try! It seems pretty replayable too, you unlock medals on each mission for things like avoiding killing enemies and never being detected. Plus there’s even a built-in level editor!

I played through Streets of Rage 2. It’s an arcade-style beat ‘em up without saves, so it’s a pretty short but challenging game!

Truthfully, I only made it to stage 5 naturally. By that point, I’d already used all my continues, and had only 3 lives left. There’s absolutely no way I would have beaten the game from there without dying at least 3 times. So, I activated an infinite lives cheat and continued on my merry way! I definitely needed it, I probably died at least 20 times over the course of the rest of the game.

Streets of Rage 2 was a great beat ‘em up. Nice looking 16-bit era spritework, great music, and a co-op option…it has a lot going for it! I played on the “Normal” difficulty, but there are 3 difficulty levels above that too, so there’s definitely a lot of room for those looking for an even greater challenge.