I tried playing this hack ‘n’ slash adventure game this week. It’s sort of like a 2D Zelda game in some ways, but with less focus on puzzles and exploration and more focus on combat. You play as Ali after he finds the Gold Armlet, a legendary treasure used to summon spirits. As the new bearer of the Gold Armlet, it’s up to Ali to fight against the wearer of the Silver Armlet in order to save Oasis!

Like with Zelda, there’s dungeons to explore, with enemies to defeat and some simple puzzles, usually involving buttons that need to be held down by pushable rocks. At the end of a dungeon, you’ll fight a boss, and in several of them you also acquire a new power in the form of a summon spirit. These spirits give you new abilities in battle while they’re summoned, and their powers cost SP to use. Some powers also allow you to explore further, like when you need the power of the fire spirit in order to melt an icicle blocking your path, so in that way it’s also similar to Zelda where you’ll gradually be able to overcome more obstacles with items like the hookshot or bombs. 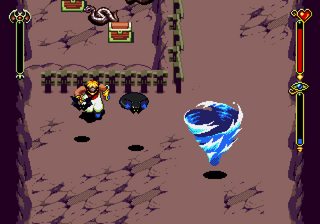 One thing I really liked was how you summon the spirits. To summon them, you need to fire a ball of light from the Gold Armlet at something in the world that represents their element. For instance, to summon the water spirit you have to fire a ball of light at water, and that can be any water source whether it’s a river or a small geyser. I thought this was a cool twist rather than just allowing you to summon whichever one you wanted at will from a menu or something. Some puzzles even make use of this restriction, and that was cool to see as well! Also the graphics are beautiful, the colors really pop and the sprites look great.

Unfortunately, a few dungeons into the game, maybe around the halfway point, the difficulty ramped up too much for my taste. After getting really frustrated in a dungeon full of several annoying rooms and traps, I decided to drop this playthrough. I even beat the frustrating dungeon, but after glancing at a walkthrough online and fining out that the next dungeon contained even more annoying rooms, I decided I was done with Beyond Oasis.

After my misadventures in Beyond Oasis, I wanted to play a much calmer game. Professor Layton is certainly that, but that doesn’t mean it’s easy!

Professor Layton is like a puzzle-adventure game. You play as Professor Layton and his assistant Luke as they investigate mysteries in St. Mystere, a rural village. Some parts are like a light point-and-click experience, as you talk to villagers and examine objects around town, but much of the game is spent solving the various puzzles. Many of these puzzles are no joke! There are variations of several common riddles and brain teasers, and while some of them were vaguely familiar to me I often had to look at them for quite a while before I could even hazard a guess at the answer. And oftentimes my first guess was wrong!

Sometimes I felt like I wasn’t patient enough for this game. Some of the puzzles were really tough, and even though most of these tough ones were optional and I could have just ignored them, once I started them I was usually too stubborn to give up. But I also wasn’t patient or clever enough to solve them on my own, so I ended up looking up the solutions to a few puzzles in the latter half of the game. Admittedly, that does sort of defeat the purpose, but the last few required puzzles were super tough, and I really wanted to see how the story ended because these characters are extremely charming!

This is one of the best looking DS games I’ve played. The 2D art is wonderful, with delightful character designs and backgrounds, plus the animated sequences look great too. They’re quite compressed, but they had to be to fit on the DS cartridge so just the fact that all these animations and even some voice acting fit onto the cartridge is pretty impressive.

Despite my complaints about how tricky some of these puzzles were, they were well designed. Kudos to the puzzle master, because I can’t imagine trying to come up with over 100 puzzles and writing several hints for all of them, but that’s exactly what they did in Professor Layton and the Curious Village! And even though some were quite difficult, others were much more manageable, and I solved many of them on my own or by using only the in-game hints. That was always a good feeling! Add to that the charm of Professor Layton, Luke, and the rest of the cast, and I’m definitely interested in playing more games in this series!

I started this game at the end of the week. I’ve played Resident Evil 5 and 6 prior to this, and Resident Evil 4 has similar gameplay, so I sort of knew what to expect going in. Stepping into the shoes of Leon S. Kennedy, you’re on a mission to rescue the daughter of the President of the United States. All you know is that she’s somewhere in a remote European village, but Leon immediately realizes that something isn’t right with this village. Leon is familiar with zombies due to his role in Resident Evil 2, but these villagers are something different.

Managing your resources is an important part of the survival horror genre that Resident Evil popularized. You have limited inventory space, but so far that hasn’t been a problem in my playthrough. I’ve also been keeping a close eye on my ammo supplies, and I have gotten pretty low but I’ve never completed run out of ammo so far. Sometimes you just need to run from foes rather than waste ammo trying to defeat them all! I’ve died a few times when I ran into enemies or bosses that I wasn’t prepared for, but once I knew what to expect I was able to scrape by.

Eventually, you find the President’s daughter, Ashley. But things are far from over! Instead, the game becomes an escort mission where you must guide and protect the defenseless Ashley. This might sound like a drag, but it’s executed very well and has been fun so far. Ashley can’t use a weapon in combat, but she does a pretty good job of staying out of the way. She’ll duck when you’re aiming your weapon so you can shoot over her to hit enemies, and you can tell her to hide in certain objects to keep her safe when there are a lot of enemies to deal with. I’m really enjoying this game so far, I don’t know what to expect next but I’m ready for whatever comes my way (I hope)!