I’ve kept things spoiler-free this week, so both sections should be safe to read regardless of whether you’ve played these games!

I finished Fell Seal this week! The road to the end was just as full of strategic bliss as the rest of the campaign, though there were some nasty enemies and maps towards the end. Some of the enemies could cast a Teleport spell to move my units wherever they wanted, and the AI repeatedly did this to all my units that couldn’t swim, dealing 999 damage and instantly killing them! You can adjust this in the difficulty settings and prevent the AI from drowning your units, but I figured I deserved it for not looking at the map ahead of time and equipping my vulnerable units with accesories that allowed them to swim. Anyway, aside from that there really were some challenging maps towards the end, and I got a few game overs. I might have been able to scrape by without it, but I did a little grinding and found these chapters much more manageable afterward.

The achievement I unlocked from beating the game called the ending the “first ending,” but in my mind it’s more of a “bad ending.” The outcome is pretty bleak for some of the characters, and it definitely doesn’t feel like the ideal resolution to the conflict. I would continue playing to pursue a better ending, but it seems like I would need to do a lot more grinding to be able to keep up with the strong enemies standing in my way. Most of the enemies on the optional maps that I think I need to beat to get a better ending are around 5 or more levels higher than my strongest units, and it makes a huge difference. So for now, I’m done with Fell Seal, but I may reinstall it and revisit my save file later. There’s DLC coming later this month that lets you recruit monsters on your team, and that sounds pretty interesting. I may pick it up down the road when I jump into Fell Seal again. Anyway, I would definitely recommend Fell Seal to any SRPG fan. It was a great experience and I look forward to seeing what comes from developer 6 Eyes Studio in the future!

Persona 4 Golden released on Steam this week! I can barely believe it, but this means a Persona game is available on a non-PlayStation platform for the first time ever. I picked up the PC port on launch day, and it was all the excuse I needed to start a replay of the game!

First, a quick overview of Persona 4’s premise. You play as a transfer student moving from the big city to Inaba, a small, fictional town in the Japanese countryside. You’re staying with your uncle and his daughter Nanako there for 1 year. Shortly after the start of the year at your new school, Inaba is shaken by a series of mysterious murders, where the victims are found dangling from tall objects. In an unexpected turn of events, you and a group of new friends become wrapped up trying to catch the culprit, and prevent further murders from occurring. You do this by using your newly discovered ability of being able to enter TVs, physically crawling into the screen to explore the mysterious TV World beyond, where you can summon powerful entities called Personas in order to do battle with the malicious Shadow monsters within. Will you be able to discover the truth of what’s happening in Inaba, or will it remain forever obscured by fog? That’s what Persona 4 Golden is all about! 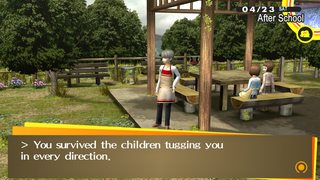 Persona 4 Golden was originally a PS Vita exclusive. As far as this port to PC goes, it seems solid from everything I’ve seen so far. It might not have the bells and whistles that some PC ports have, but it does have a few adjustable graphics options, and offers a better framerate and slightly prettier graphics than the PS Vita version. At its heart, it’s still a PC port of a Vita game that was itself an updated version of a PS2 game, so the 3D models can look kind of blocky. The 2D character sprites look fantastic though, I’m glad such high quality versions of those were available!

Anyway, I’m really enjoying replaying this game. I’m just past the 2nd main dungeon of the game now. I really struggled with the first dungeon boss because my team was pretty underleveled at the time. However, during the 2nd dungeon I made sure to battle mostly every enemy I saw while exploring the randomized dungeon floors, and when it came time for the 2nd dungeon boss I was able to handle it without any issues. I definitely remember having issues with both bosses during my original Vita playthrough of the game, so it’s encouraging to see I’ve improved since then. Aside from dungeons, I really enjoy the time management “life sim” aspects of the game too, where you have to budget your time each day to decide if you want to hang out with friends to advance Social Links, work on improving your Social Stats like Knowledge or Courage, or head into the TV World to fight Shadows and gain levels. Long story short, I love it, and I’m looking forward to the rest of my playthrough!