Be warned, minor spoilers may be contained within. This week, I discuss the ending of Persona 5 Royal in a very vague way, but it is mentioned nonetheless. If you want to totally avoid all potential spoilers so you can play these games yourself in a blind run, you shouldn’t continue reading!

A self-described interactive movie, Late Shift is sort of like the Telltale games, and your decisions shape and affect the narrative. However, instead of using rendered 3D graphics, the visuals consist entirely of real world video footage. Real actors portray the in-game characters, and real sets and locations make up the environments. There are also no puzzles or anything like that to solve, and only interaction available to the player is making choices. Thus, “interactive movie” really does describe it most accurately. The decisions you make are on a timer, and you’ll have to make quick decisions to ensure things go the way you want them. The video doesn’t pause during these decisions either, so there aren’t any awkward pauses. It’s an interesting concept for a game, and likely posed an interesting challenge for the director and game designers, as they must have had to carefully plan the script and actors’ performances to make sure that scenes would play out naturally regardless of which prior decisions the player made.

You control the actions of Matt, a night security guard at a parking garage in London. What starts as an ordinary night quickly spirals out of control as he gets wrapped up in a heist, and your decisions control how he reacts, and what choices he makes.

It’s a short but thrilling experience. My first playthrough was about an hour and half and my second ended up being a few minutes shorter. The production value is pretty high, it felt equal to a Hollywood thriller you’d see in theaters. Only in one instance did the effects look a bit cheesy, and this moment quickly passed. I played through it twice, and it was interesting to see how the overall plot remained the same, yet certain events and details changed, and certain chapters just didn’t occur at all on my second playthrough. At the end, you get a summary of your choices, which tracks how many total endings you’ve seen. This is a nice touch, and if the 2 endings I’ve seen are any indication, the endings can be significantly different. I wonder if some endings are only trivially different from each other, or if all of them are as distinct as the ones I saw…? In any case, I think playing through the game a third time right now might feel stale. It’s definitely worth at least 2 playthroughs if you’re interested in the concept, maybe even more if you’re really curious!

Two new villagers moved to Stardew this week. Tiffany, a rabbit who was also in my New Leaf town, and Rooney, a tough guy kangaroo. He’s a bit intimidating.

Other than that, I paid off my home loan, and immediately took out another to add another room to my house. It’s 548,000 bells this time…yikes! I’m sure I’ll pay it off eventually, but I’m still far from wealthy in this game. Another room was added to my house again, I was hoping I’d be able to choose if I wanted a new room or a 2nd floor or basement at this point, because I really want a basement. It’s probably GameCube Animal Crossing nostalgia that makes me feel that way. The new room is cool too though, I’m planning on making it into a kitchen…I just don’t have any counters to put appliances on yet. Now that I’ve gone through several home upgrades, Nook can customize my house for a modest 5,000 bell fee. That’s really a cheap price, and I can finally change my mailbox from the shoddy-looking default!

PatronusLight and I finished our playthrough this week! It was an absolutely amazing experience. The path to the new “true” ending was pretty epic. I had been worried that it would feel underwhelming compared to the original game’s final dungeons and bosses. To my relief, this wasn’t the case! As for the ending itself, I mostly appreciated it. In some ways, it isn’t as good as the “true” ending of the original game. In particular, the ending animated cinematics just didn’t provide the same closure. They were animated well, but they didn’t have the same amount of heartwarming moments, and they didn’t even make good use of the new characters. PatronusLight didn’t care for the new ending, and from what she’s read online it seems like she’s not alone. 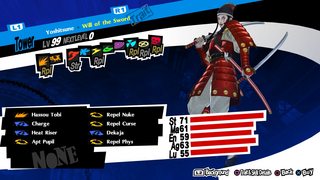 I loved the gameplay during the new extra chapter. Naturally, you’re pitted against stronger enemies than ever before. This allowed me to get my whole team to the max level, 99. I had to do a little grinding, but the payoff was totally worth it. We were so strong that we basically obliterated the final boss. Part of this is because I had a very powerful level 99 persona, Yoshitsune. I had him use Charge, which normally increases the power of your next physical attack by more than double, but he also had the Will of the Sword trait which triples the effect of Charge, and I buffed my character with Heat Riser to give him increased attack, defense, and accuracy for 3 turns. Then, all that was left to do was use Yoshitsune’s unique Hassou Tobi skill, which hits all enemies 8 times. This works well against pretty much any enemy that can be damaged by physical skills, bosses included.

Overall, Royal is absolutely an improvement over the original game. It’s not perfect, and makes some odd changes here and there, but the original game wasn’t perfect either. I love both games for sure, but I think I’ll be less likely to return to the original now since Royal adds nice quality of life improvements while improving the persona system with traits, and making the battle system even more fun!

The Legend of Heroes: Trails of Cold Steel II (PC)

I played Trails of Cold Steel 1 back in 2018, and at long last I’ve begun playing its direct sequel! I really enjoyed the first game. It was a very good JRPG, but I’d been playing so many other games since then that I never started the sequel. Now I have, and it has been great so far!

The plot of Trails of Cold Steel II picks up a month after the ending of the first game. It doesn’t waste much time recapping the ending of the original game either. Instead, it gets right into continuing the story, but it provides a full synopsis of the first game accesible from the main menu. I appreciate this inclusion, but I’d already refreshed my memory by reading a synopsis online by the time I saw this feature so I didn’t use it. That said, there is a lot going on in this series. Tons of characters, all with their own backstories and allegiances, and lots of events from the first game are mentioned, even if they are only passing references.

Anyway, I’ve only made it through the prologue and partially through chapter 1 at this point, so I’ve got a long way to go. The story is really interesting already, I really have no idea where it’s going to go long term, so that’s really exciting! Also, I’m definitely getting right back into the groove with this battle system. There are a lot of elements involved, and I’m trying to learn how to best capitalize on all of them.

I’ll probably go more in depth on the battle system in a future post. I’m really not sure how I’ll cover the story of this game, because I’m not even sure if I’m fully following everything going on in this world. I also don’t want to post too many spoilers, but some might be unavoidable. I’ll do my best though! Let’s close this post with a track from the OST, because I’ve really been enjoying some of the music in this game too!