As for the Persona 5 Royal section: I’ve done my utmost to keep things spoiler-free even if you haven’t played the original Persona 5. I try to avoid in-game dates and objectives in the screenshots when I feel that information spoils something. That said, if you want to go into Royal completely blind, you probably shouldn’t look at the screenshots! The screenshots don’t spoil anything that the pre-release teaser trailers for Royal didn’t already cover though, so if you watched those there’s nothing new to see.

Another short game checked off my Steam backlog in an effort to slowly bring it down, Never Alone is a puzzle platformer in the same vein as Limbo, and tells the traditional Iñupiaq story “Kunuuksaayuka” in video game form.

When starting the game, it explains that the Iñupiaq are an Alaska native people, and numerous stories about their culture and folklore are included as short video clip interviews called “Insights” that you can unlock and optionally view as you play. As someone who didn’t know the term Iñupiaq prior to playing, and knew nothing about their culture, it was nice to learn a little about them as I played. The fact that Never Alone is an enjoyable puzzle platformer just makes it even better! Plus the animations shown during the cutscenes between some levels are presumably influenced or directly taken from traditional Iñupiaq drawings, and they were interesting to see too.

The gameplay of Never Alone is split between two characters: a young girl, and her arctic fox companion. It can be played in co-op from start to finish, and would probably be a lot of fun to do so. I played it single-player, and found the companion AI to be well implemented. There was only 1 or 2 times where the AI did something silly, but otherwise it was an enjoyable single-player experience. The girl and the fox have different abilities. Only the girl can use a mystical bola to hurl energy and break obstacles, while the fox can attract spirits toward itself to act as platforms for both characters to stand on. These abilities and more take you through the game’s several levels, each of which has its own puzzles and platforming segments to overcome. The beginning was pretty straightforward as it has several tutorials, but once the training wheels came off there were some slightly challenging segments. I found myself dying more than a few times in the final levels! Luckily the checkpoint system is very good, so if you do fail you never need to repeat too much. I definitely recommend this game if any of the above sounds interesting to you!

Not much notable happened during my time with Animal Crossing this week. I finally contributed all the funds needed to build another bridge, as well as build my island’s first incline. Otherwise it was mostly just time spent catching fish and bugs, and chilling with the villagers.

I also set aside two plots of land for future villagers, but I haven’t checked back to see if anyone has moved in yet.

We made a ton of progress in Persona 5 Royal this week. We passed where the game originally ended, and have made it to all new territory! I won’t be covering those parts much since I don’t want to spoil them, and also because the PS4’s screenshot and video recording features are disabled once you reach that point in the game. I will share a couple screenshots of new character Kasumi and her persona, Cendrillon, here, because this was part was pretty awesome and I just have to post them!

Anyway, we explored through what was generally considered the worst dungeon in the original game. In Royal, an especially tedious bit has been streamlined, which is a very welcome change. I didn’t find the dungeon to be a chore to get through in Royal, but that said it probably is still my least favorite…mostly because of the final boss. In the original game, the boss was probably the best part. It felt like a fair, balanced fight in the original game. In Royal, it feels infuriating. You have to defeat 4 pretty tough enemies within like 3 turns, otherwise they flee and are replaced by 4 more, and the cycle continues. My frustration here might be partially due to playing on Hard mode. I switched to Normal after getting a Game Over in the fight, but even at this difficulty I wasn’t sure if I’d be able to pull it off. I made it through by summoning a DLC persona from the compendium, Magatsu Izanagi Picaro, and spamming a powerful attack it knew. A cheap solution on my part, but desperate times and all that.

Some time later, another late game dungeon experienced a few changes as well. The layout of this dungeon had some new areas you could explore by utilizing the grappling hook, but overall I think the design was mostly the same as in the original game. I might just not be remembering correctly. Either way, this one was long, but fun to work through, and more importantly features probably the most amusing trait of any dungeon: you turn into mice in some areas. The new content comes in the form of cages with cheese in them. These cages can only be accessed while in mouse form, and your character will quickly snatch the cheese from the cage, allowing the team to eat it and recover some HP/SP. At least, I think you recover HP and SP…honestly I’m not sure, I never checked the numbers to see if my HP/SP was recovering after eating cheese. If it does recover, it’s by a small amount. Still, I really liked this addition, and I ate every single piece of cheese I could find. 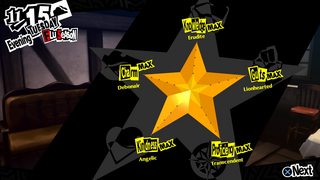 Aside from the dungeon crawling, PatronusLight also got all our Social Stats maxed out this week. That’s always a great milestone in these games, since now when she starts New Game+ from our save file she’ll have maxed out Social Stats from the beginning of the game, and won’t have to spend time on activities to increase them. 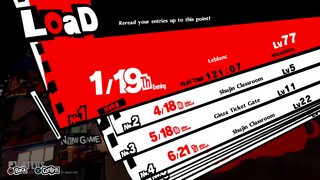 As far as the new content goes, I’m really liking it! I was skeptical of how it would feel since the plot of Persona 5 comes to a pretty epic peak in the final moments, and this new story chapter in Royal takes place after that. Yet surprisingly, what we’ve seen so far really works for me. It hasn’t been epic in the same ways as the original ending, and some of the story beats I saw coming from a mile away, but some parts have still blown my mind. I’ll leave it at that to avoid spoilers! One especially cool aspect is that many of the enemies you fight at this point in the game are new to Persona 5 Royal. Some of them I’m familiar with from Persona 3 and 4, but others are brand new to me, and probably have been pulled from elsewhere in the Shin Megami Tensei series! PatronusLight and I are currently at the 121 hour mark in our playthrough, and it seems like we’re really getting close to the end!