While waiting for Persona 5 Royal release day, I picked up this short visual novel to pass the time. Kimmy is about the eponymous character and her babysitter Dana, whom the player controls, as Dana becomes Kimmy’s babysitter, helps her make friends, and tries to figure out what’s going on with Kimmy and her family. It also has this simplistic, child-like art style. The simple shapes that make up characters and their features are almost chalk-like, in a way.

The story is set in Massachusetts, near Boston, in the summer of 1968, and there are a few interesting consequences of settings since the 1960’s were a very different time in America. One thing that sticks out early on is that Kimmy is regularly tied up on her front porch when her mom has to go to work. Each day when Dana goes to pick Kimmy up, she’s tied up there. Dana is young, so she was taken aback by this, but her mom doesn’t really bat an eye at it and simply says it’s an old-fashioned practice, and that the rope is a “cheap babysitter.” A very different era indeed. Anyway, gameplay consists of buying games from the store, then talking to the kids around town and teaching them to play games, which consumes the game item from your inventory. Buying things at the store, and playing games with kids will cause time to advance 1 hour, and each day you have 5 hours to kill until it’s time to drop Kimmy off at home. When you are teaching a game, you’ll have to answer multiple choice questions about the game’s rules, and I found this to be pretty charming, if simple. It was largely straightforward what the correct answer was, although I was definitely guessing in a couple of cases. One game, cootie catcher, I had never heard of before. 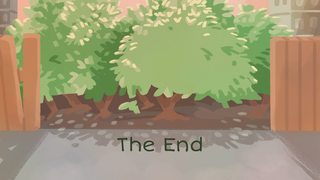 The game only took about an hour and a half to play through, but I was surprised at how emotional it got to be in that time. This one definitely hit me hard, so I’d recommend it for sure if you’re looking for a short visual novel, seen through the eyes of a child in the 1960’s.

April brought new fish and insects to catch, including several new butterflies, and I began seeing dragonflies zipping around too. I feel like the dragonflies are way faster in New Horizons than I remember them being in New Leaf. Also, I love the pun for the darner dragonfly, “It better watch its mouth!” That’s too perfect, haha!

Bunny Day is coming up soon, and Zipper the bunny showed up in town to get everyone hyped for the upcoming holiday. His arrival meant that colorful eggs could now be found when harvesting various resources, and when fishing. This started out cool, and you can learn and craft Bunny Day DIY items that use the eggs as materials, but I quickly got fed up with catching eggs when I just wanted to catch some new fish! I caught so many water eggs that I turned into one.

I paid off my home loan, and again expanded my house. Now, there’s a second room at the back of the house that I’ve made into my bedroom. My character doesn’t need to sleep in the same room as the server racks now, huzzah!

The tailor shop was built and opened for business this week. I chose a nice spot by the seaside for it, because it reminds me of my tailor shop’s location in either the original Animal Crossing or in City Folk. Or maybe both…? Either way, the tailor shop just feels like it should be by the ocean to me. The New Horizons tailor shop adds a nice new quality of life feature, a fitting room. Here, you can see all the clothes available to buy at once, build an outfit out of them, and then buy all the items you’re interested in right there. It’s a great feature!

New villager Lopez moved in this week. He first visited the newly built campsite that I place earlier in the week, and I talked him into moving to Stardew permanently during his camping trip. It seems like this is the way new villagers will be introduced from now on, potentially? They’ll set up a tent at the campsite, and you can ask them to move in if you like them.

Once again, I’ll be keeping a close eye on the Stalk Market over the next week, because I’ve invested all of my savings into turnips. Hopefully I’m able to make a nice profit…I’ll definitely be checking twice a day, every day!

Early this week, an updated version of Persona 5 came out: Persona 5 Royal. PatronusLight and I got the special edition on release day. The new animated OP is just the beginning of the wonderful additions to the Persona 5 experience.

PatronusLight and I are playing through it together. For the most part, we’ve split it up where I play through all the dungeons and combat, and PatronusLight plays through all the life simulation parts. This leads to hours long stretches at a time where only one of us will be playing, and the other watching, but I’ve really enjoyed it so far! I don’t think PatronusLight has enjoyed watching me play through the dungeons as much as I’ve enjoyed watching the story and life sim parts though. Anyway, we named our character Masahiro Worm, and started playing at the beginning of the weekend and basically only stopped to eat and sleep.

This game is so good. It’s Persona 5, which was already a fantastic game, but with even more things to do added into it. PatronusLight is already planning her New Game+ playthrough on our save file for after we beat it. There are new elements to combat, like Showtime attacks where two of your teammates partner up to deliver a flashy and powerful attack. These are really cool! The way they showcase character interactions is amazing, and they’re so over-the-top and charming they just make me smile every time I trigger one. You can skip over the animations, but I’ve watched them most of the time because the characters will say a few different lines during the attack.

The only weird thing I’ve encountered is that the “Normal” difficulty felt a lot easier than Persona 5’s Normal difficulty. I actually switched to Hard during the third dungeon, and found this to be much more in line with how I remembered Persona 5’s difficulty to be. I’m really not sure if it’s just because I’m really accustomed to Persona 5’s gameplay by now, having played the original game 2 or 3 times, or if Royal is just made easier by the gameplay changes. Either way, Normal mode was fun, but I’m enjoying the balance of Hard more.

Some of the most notable changes made in Royal are the new characters, Kasumi and Maruki, and overhauling the Justice confidant from the original game. I like the new characters a lot personally. I feel like they fit in organically most of the time. At first, Kasumi felt a bit shoehorned in, and have been a few awkwardly forced conversations, but that might be just because I was so used to the original game. There’s a new music track that plays when meeting with Maruki that I really like. All the new tracks I’ve noticed are good, but that one’s probably my favorite because it really amplifies the mood of those scenes.

I’m thinking about doing a full review of the game, or maybe just a post about how it compares to the original, so I won’t go into too much depth or rave too much about it here. PatronusLight and I took 2 days off work and had a 4 day weekend, which we spent every possible moment of playing Persona 5 Royal. It was glorious. Our playtime currently sits at 62 hours, and we’re probably only about halfway through the game! Surprisingly, in that time I haven’t taken all that many screenshots. I’ve really just been kicking back and relaxing in that wonderful Persona bliss, and it’s been awesome.