Be warned, minor spoilers are contained within. Generally, I do try to keep things spoiler-free but this isn’t always possible/practical! If you want to totally avoid all potential spoilers so you can play these games yourself in a blind run, you shouldn’t continue reading! Click a title to skip to that section. Games contained within this post:

I finished Golden Sun: The Lost Age this week! Aside from completing the final main story dungeons of the game, I also spent a while collecting Djinn I’d missed, and doing side quests to get more summons. Some of the summons I got were Eclipse, this huge dragon that shoots a strong energy blast to damage all enemies, and Coatlicue, who heals the whole party by a small amount immediately, and causes you to regenerate a ton of health at the end of each turn for several turns. To get some of the summons, optional bosses at the end of optional dungeons had to be defeated. They were pretty tough actually! Luckily, with Isaac’s team available to me now, I could switch out one character at the beginning of each turn. I used this to cycle out characters that were KO’d, and didn’t have too much trouble defeating the bosses.

The end of the game took me to Prox, at the far northern reaches of the world. This icy village is where Saturos and Menardi called home. In passing through the village, Isaac is recognized as the one who killed Saturos and Menardi, but the mayor and other citizens of Prox don’t hold it against him. In the interest of preventing the end of the world, they cooperated and allowed us to pass through so we could press onward to Mars Lighthouse.

In the middle of Mars Lighthouse, you get an item which gives its wearer the Teleport psynergy. This psynergy is used to progress inside the dungeon, but when used on the overworld it allows you to instantly teleport to any town in the game. This is extremely useful, and it was actually at this point that I teleported around the world completing the aforementioned side quests! 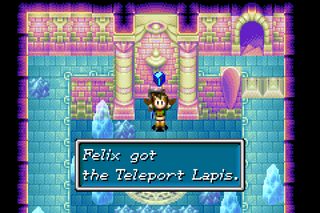 Eventually, I returned to Mars Lighthouse to finish the game. My team had to overcome the Doom Dragon before they could ignite Mars Lighthouse. This battle was similar to the optional bosses I’d fought earlier. I had a much easier time with this one compared to the final boss of the first game. I was probably much better prepared though, as I used a guide for more of The Lost Age to make sure I didn’t miss things. In the end, we defeated the Doom Dragon, lit the lighthouse, and saved the day!

The ending sequence before and after the credits ties up the loose ends, and the conclusion was pretty heartwarming. I’m really glad I played both Golden Sun GBA games! I know that Golden Sun: Dark Dawn on the DS exists as well, and takes place many years later when the party have grown up. I don’t have immediate plans to play Dark Dawn, but I might give it a shot sometime down the road.

The first thing I accomplished this week was completing Chapter 2. After progressing through some main story events, I soon reached the boss at the end of the chapter. This was Gangrel, based on the Fire Emblem villain of the same name. Neat! He KO’d a few of my party members a couple of times, but we were victorious in the end.

At the end of Chapter 2, a new party member is introduced, Eleonora Yumizuru. She’s half-European, and a Mirage Master as well. She joins the team for Chapter 3, but before that I took a detour during the Intermission between chapters to do some side quests!

The first thing I did was explore the newly available optional dungeon, the Area of Aspiration. By completing the levels of this dungeon, you experience the EX Story chapters, which are short little side stories involving the characters. For example, this first one was about Tsubasa covering Kiria’s hit song, “Reincarnation.” My main reason for doing this was the promise of new costumes for the characters, as the tutorial popup informed me there would be costumes to find in the dungeon.

As the tutorial promised, the dungeon did indeed contain new costumes, and they were definitely worth it! So far, the costumes have been references to other Atlus games, like Persona Q, Shin Megami Tensei IV, and Persona 5!

Like in the prior chapters, the conflict in chapter 3 centers around another Mirage attack on an area in Tokyo. An entrance to a new Idolasphere appears, and it’s up to the Mirage Masters of Fortuna Entertainment to come to the rescue! I haven’t entered the new dungeon yet, but I’m looking forward to trying out Eleonora and her Mirage, Virion. My team has grown so much now!

At long last, I found the double jump upgrade, the Monarch Wings! I knew an ability like this had to exist somewhere, because I kept seeing overhanging ledges that I couldn’t jump or wall jump up to. Now, I can finally explore those areas! The enemy I had to get the upgrade, the Broken Vessel, was pretty memorable. Initially, it’s just a broken husk of some creature in the room, but when you enter it becomes possessed by the strange orange substance in the background. Its design looks awfully similar to the player character, which I’m sure is no mere coincidence, but I still don’t fully understand the implications of this. 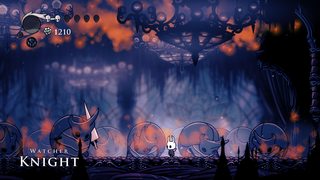 With the Monarch Wings, I was able to explore new areas around the City of Tears and the Soul Sanctum. One of the Dreamers was sleeping there, so I made for their location. I had a bit of trouble defeating the Watcher Knights boss along the way. Fighting just one Watcher Knight at a time would have been pretty easy, but more keep appearing and I was almost always fighting two at once during this fight. I died a number of times, but eventually claimed victory. I made use of the Flukenest charm I’d gotten from defeating the Flukemarm last week, and found that it was very helpful here. It spawns a swarm of little slug creatures when using the projectile spell, and that seemed to do quite a bit damage, which helped me defeat the Watcher Knights much more quickly, minimizing the amount of time I had to juggle two of them at once.

With the Watcher Knights out of the way, nothing was left to protect the Dreamer. I reached them, cut my way into their dream with the Dream Nail, and viciously attacked them and absorbed their soul. They didn’t fight back at all, which almost gave me pause.

Deepnest is where I turned my attention afterward. I’d visited the area and acquired a map earlier, but I hadn’t gotten too far into it. It’s a pretty unsettling place. It’s dark, and instead of the thorns and spikes other areas have, Deepnest has masses of writhing insects. As if that weren’t bad enough, there are also enemies that cause corpses to reanimate. They make a horrible clicking sound as they move around, and the first time one came charging at me I was pretty surprised. I wouldn’t say I was afraid to explore Deepnest, but it definitely had me on edge more than any other area. 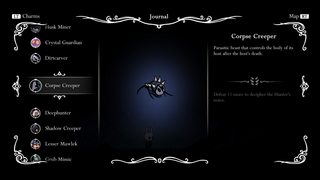 Once I made it through to the other side of Deepnest, I discovered the Distant Village. My map marker informed me another Dreamer was here, so I stepped into the Beast’s Den to hunt them down. The Beast’s Den is covered with spiderwebs, and is a maze of narrow passages and trap floors that give way to spiky pits. Soon, I found where the Dreamer lay sleeping, and destroyed them.

With them gone, only one Dreamer remains. One more Seal to break on whatever is within the Temple of the Black Egg, although I don’t know what’s going to happen when I do. It seems like since I’ve begun destroying the Seals, some sort of infection is taking hold in the Forgotten Crossroads beneath Dirtmouth. They’ve become the Infected Crossroads now, and the hostile insects living there seem to have fallen prey the infection, and are stronger because of it. 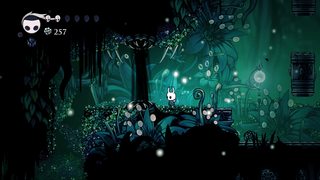 To be honest, I’m not really sure how to proceed next. The Fog Canyon is where the final Dreamer rests, but my exploration there has been blocked by strange shadow barriers. I haven’t figured out how to get past them yet, but it seems like I can’t even reach Conifer to get a map of the area, since I hear him humming just beyond one of the barriers.